This guide builds on a basic understanding of gameplay and league mechanics in Path of Exile. It’s highly recommended to check out both the 3.0 Beginner’s Guide, and the patch 3.2 guide. There’s also a guide to end-game Mapping if you need it. This guide skips over a bunch of the basics and focuses entirely on the new content and the end-game. So if you’re looking for more basic help, check out the other guides.


Before we begin, Path of Building is a very important tool to have when following a build guide since many of them share PoB links. Additionally, make sure you have a good loot filter. I personally recommend NeverSink’s Loot Filter.

If you need help selecting a starter build, check out some of our recommendations for various builds for Incursion League.

Path of Exile‘s 3.3 patch is all about skill revamps and buffs. The dozens of new or modified skills have significantly altered the meta-game of POE. I strongly suggest reading through the patch notes for all the various skills and classes that have changed in this patch. Because when combined with the general buffs to Ascendancy classes in 3.2, this patch is a monster in terms of new build variety.

The Temple of Atzoatl is the core mechanic of the Path of Exile 3.3 update. This new mechanic is a continuation of the “maps within maps” style of gameplay from the Abyss League and others. The Incursion League introduces Alva Valai, an explorer attempting to rebuild the Temple, which itself is a lost Vaal ruin, and to reclaim the treasures within. There’s just one problem, the temple can only be rebuilt by changing the past.

As soon as you hit the Mud Flats zone in Act 1 you’ll encounter Alva. She’ll have some introductory dialogue that exposes a bit of lore before taking you on your first journey into the lost temple. This first zone is fairly basic room with a simple layout that’s basically a tutorial on the mechanics of navigating the temple, but here’s a simple rundown:

Pay attention to the Incursion layout map Alva shows you when you find her in a map, that layout shows you the modifiers for both the Incursion and Architects within. Having that intel allows you to know which Architect to take out, speeding up your runs. Also on these layouts you’ll see red icons, these indicate locked doors. You need to find Stones of Passage to unlock these doors. Unlocking a door will create a connection between that Incursion and another in the Temple. 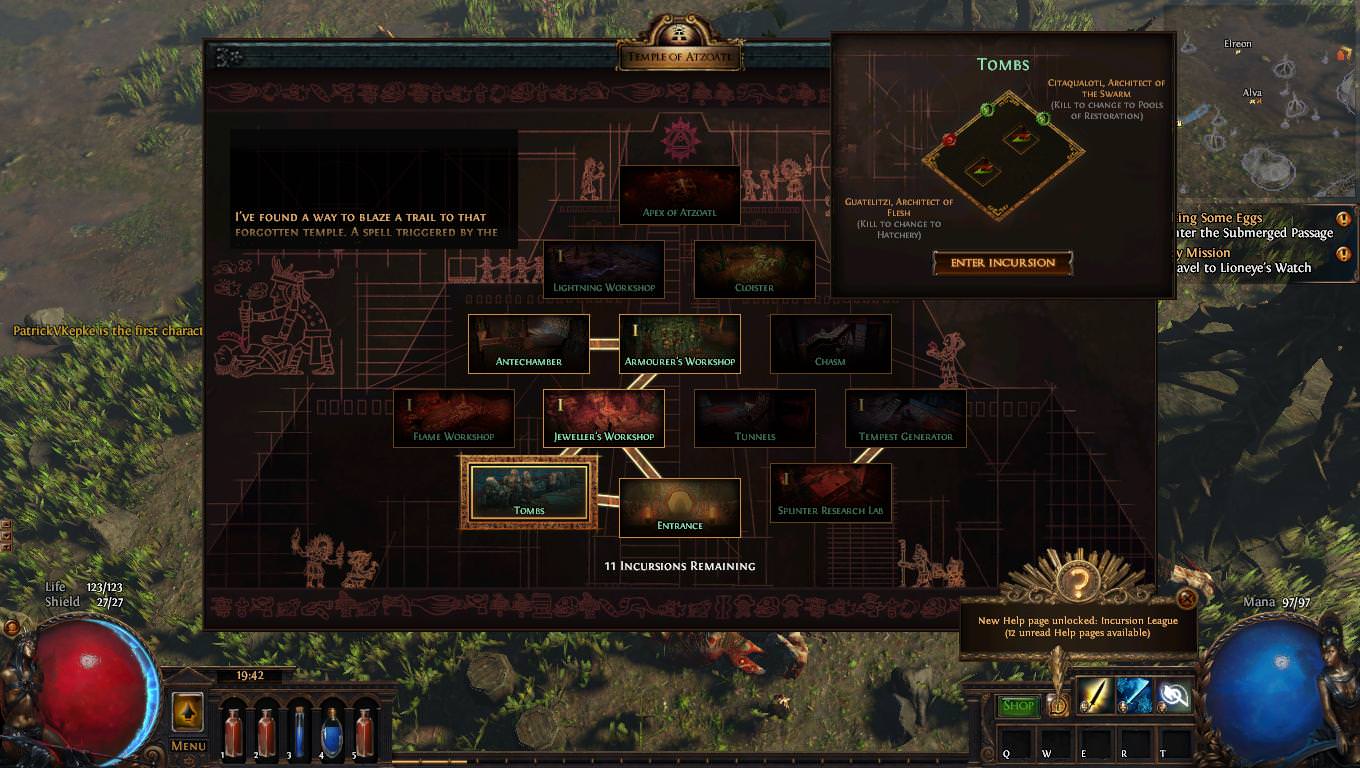 Don’t worry too much about optimum play in your Incursions while leveling. The timers are pretty unforgiving, and it’s OK if you don’t get to the Apex on your first few runs. Just focus on leveling effectively and take it slow in terms of jumping into Incursions. And since Alva spawns in every zone, it’s very easy to start new Incursions.

Incursions have different tiers, up to four different levels. The higher the tier, the more difficult yet lucrative that Incursion will be. Modifying these tiers can affect the rooms around an incursion, granting better loot or a tougher challenge in later Incursions. If you want to speed up your Temple runs, focus on killing Architects as quickly as possible and getting your higher tier rooms unlocked. As you progress toward the Architect, try to find a Stone of Passage, but if you don’t find one, just farm one later. Generally you should focus on getting one door open and killing the Architect in each Incursion. This approach provides a good balance of progression and loot opportunities.

When doing Incursions, always keep in mind what your upgrade path is. Connecting rooms becomes a lot more important at higher levels, so focus on that overall. Figure out what high-value rooms are in your Temple and focus on connecting those first, then upgrade them. Always go for upgrading rooms if they’re already connected to the entrance and will be available in the temple though.

Ff you are in a room that isn’t connected then ignore all architects and just kill mobs ***STARTING from as far away from the door you want to open as possible, then clear towards the door that would get you a connection and hope for a Stone of Passage drop. This way you can avoid a wasted run by running straight to the door and not getting a Stone of Passsage drop.

Once you’ve completed 11 of your Incursions, you’ll unlock the opportunity to access the Apex. This room contains the final boss of the expansion. Bear in mind that you do need to unlock the Apex on your Incursions with a Stone of Passage to actually fight said boss. Also, the Architects you kill and room tier upgrades you unlock can sometimes buff the boss, so be careful to not stack too many buffs onto this final fight. It’s possible not to fight the final boss at all, but you’ll miss out on some awesome loot. You can make up for this by upgrading multiple rooms to tier three instead.

Once you’ve finished the full set of Incursions, speak to Alva.

She’ll unlock a special map for the Temple of Atzoatl in the modern day. This final temple run is your real goal. The choices you’ve made in your Incursions determine the layout of the Temple, so I hope you upgraded lots of rooms along the way. Think of this as the newest version of the Labyrinth of Izaro.Your first few runs through the Temple can be full exploration runs as you learn what layouts work best for your build, as well as gauging the loot potential of different setups. As you gain more experience, you’ll start to become familiar with optimum layouts and the quickest path through a particular Temple of Atzoatl layout.

As you progress through the Temple, you’ll encounter the various mini-bosses that spawn in each type of room. These bosses will usually have abilities and themes unique to that room type. For example, the Breach-themed rooms will have enemies and a boss that not only have themed coloring to their models and skills, they may also use unique abilities to that boss.

The real prize when moving through these rooms are the treasure chests scattered around. Using the Breach example from earlier, these rooms will contain Clasped Hands and other similar chests. All the different themed rooms will have several unique chests. As you’re going through, learn what these chests look like. And to help you out, the name of the chest appears above it, just like a normal chest.


The Vaal Omnitect is the final boss of any Temple of Atzoatl run. The boss will have multiple modifiers on it depending on which Architects you’ve killed across that particular set of Incursions.

The first phase of the Vaal Omnitect fight is what I call the “murder roomba”. During this first phase the platform that constitutes the boss will float around the boss room dealing damage from each of its four turrets. The projectiles launched by these turrets deal a variety of elemental damage, so keep moving. The blue balls will explode into AoE damage where they land, so avoid that.

The second phase of the fight begins at about 50% health, so once you whittle the Omnitect down to that point, get ready for it to shift to a new fighting style. All four turrets will activate and alternate between direct fire damage, and AoE bursts. The boss will also summon a variety of adds during this phase. The best way to deal with this phase is to stay in the diagonal spaces between two turrets if possible.

The Temple is the biggest zone ever constructed in POE, and with lots of monsters, there’s plenty of potential for juicy drops. So players focused less on efficient play and more on showering themselves in loot will have plenty of fun here as well.

As you gain more experience and determine what room tiers are more valuable, efficiency will be your main goal. I wouldn’t be too surprised if we see an portion of the community theorycrafting ways to create optimum Temple runs for farming. Although the randomized nature of the rooms tiers and their modifiers means that your Temple will be fairly specific to you.

That said, there are some rooms that are worth it at almost any point, and that you shouldn’t skip, here’s a list:

Breach Rooms (Any Tier) – These rooms drop Breach Splinters and can contain Breaches on higher tiers. The loot and XP potential is always worth it.

Treasury Rooms (Any Tier) – These rooms are EXTREMELY LUCRATIVE. The drop pools in this room are massive and include both Currency Items and Divination Cards. Always try to upgrade these rooms in an Incursion run if possible.

Surveyor’s Study (Any Tier) – These rooms contain tables that are essentially chests filled with end-game Maps. Always worth popping into these rooms, especially if you’ve upgraded them. This can really help with map completion if you aren’t focusing on your Atlas.

Explosives Room (Any Tier) – These rooms contain Flashpowder Kegs that can be used to blow open a locked door, even without a Stone of Passage. These rooms can salvage a Temple run with a clutch connection to the boss.

Gemcutters Rooms (Tier 3) – These are rooms that have the potential to drop special loot like +Quality Skill Gems. Focus on popping chests in these rooms.

Jewelry Rooms (Tier 1 and up) – The amount good Jewelry is pretty high in high-end versions of these rooms. You could easily fill your inventory with high-level Rings and Amulets with Tier 3 for example. There are also a new pool of Vaal modifiers on Jewelry that can drop in these rooms.

Armor Rooms (Tier 3) – While mostly generic gear, high-end Rares and possibly gear with Vaal modifiers can be found in the highest Tier.

Sacrifice Rooms (Tier 3) – These rooms contain Tables of Sacrifice, use these to reroll a Unique item into any other Unique. Players have gotten Headhunters and other rare items from this room on day one, so it’s worth it if you’re looking to test your luck.

The rooms outlined above represent only a small portion of the valuable rooms in Incursions. Here’s a helpful reference card that shows all the room types: 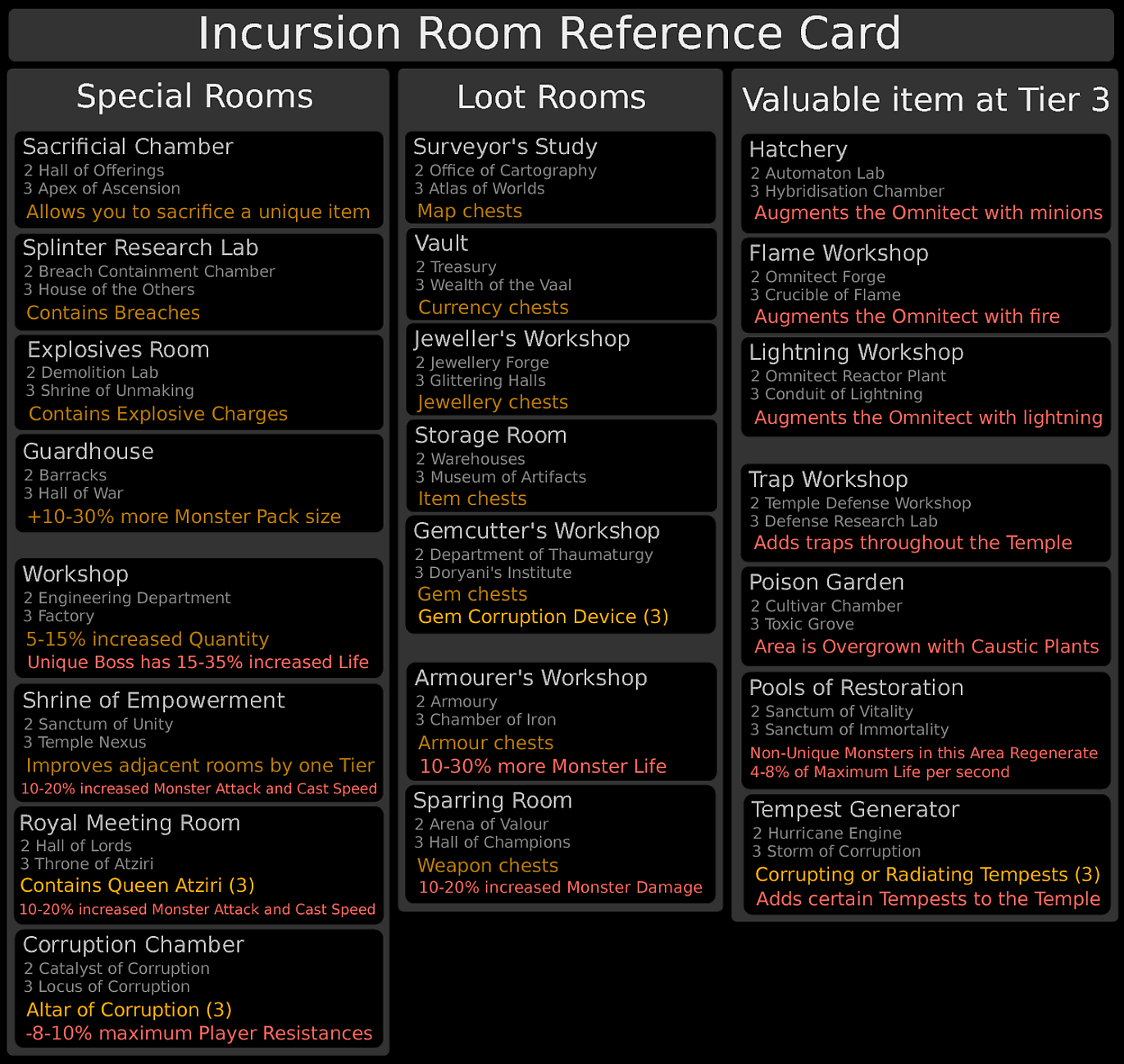