A copy of this game was provided by the developers for the purposes of this review.

Megaquarium is a game all about one thing, fish. In this new simulation game from Twice Circled, players take charge of a public aquarium and are tasked with bringing it to life. The game features both a campaign and sandbox modes, with tons of cool fish and decorative items to fill your space with.

Ever wondered what it would be like to keep your own fish? Well wonder no more as we check out this gorgeous theme-park-come-aquarium simulation!

Since Megaquarium is by the same mind that produced the excellent Big Pharma, we’d expect it to hold a lot of the same genre conventions and gameplay quirks. And while the core mechanics are very different from other games by the company, the core tycoon model is very much intact. The gameplay itself feels a fair bit unique, as does the game concept itself.

It’s all pretty fun as a concept, and even the daily grind of feeding all your fish and ensuring foot traffic flows smoothly feels good. That loop is the core gameplay after all, so it’s a good sign that even the boring bits can be fun.

The game’s tutorial is pretty thorough, so all the little details a new player might miss are highlighted pretty well. 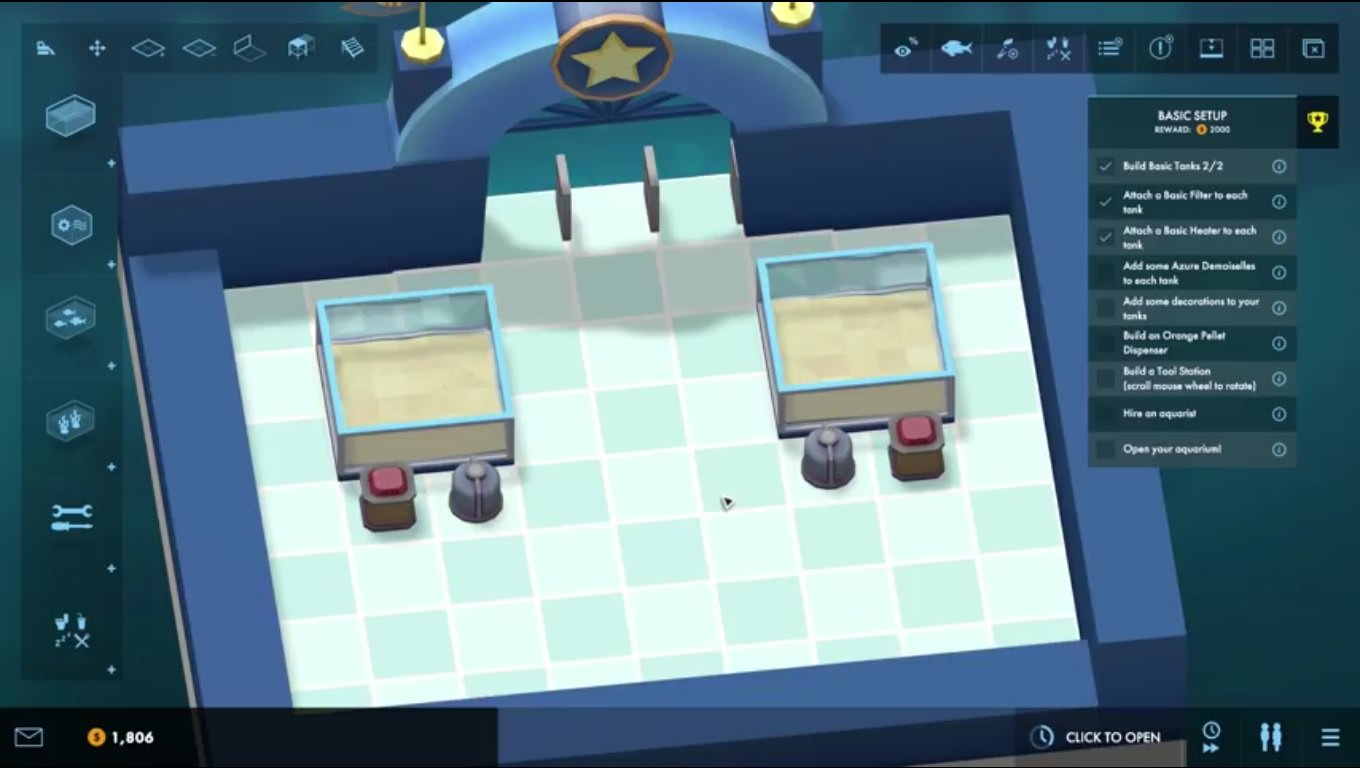 Since this is a game is all about fish, there’s a lot of minutia with caring for each species of fish. Each type of fish, and there are lots of them, has their own ecological and dietary requirements in order to keep them healthy. To start, you need to manage basic decorations, filtration and heat of your tanks, and that’s all before you plop your first scaly friend into the water.

As you manipulate the tanks and their contents, water quality might also become an issue, but that’s just the start of your troubles. And as you might expect, things break from time to time. This means you’ll need staff to maintain your tanks and other equipment. Each staff member has their own stats and backstory, and part of the puzzle of this game is picking the best staff for the job. 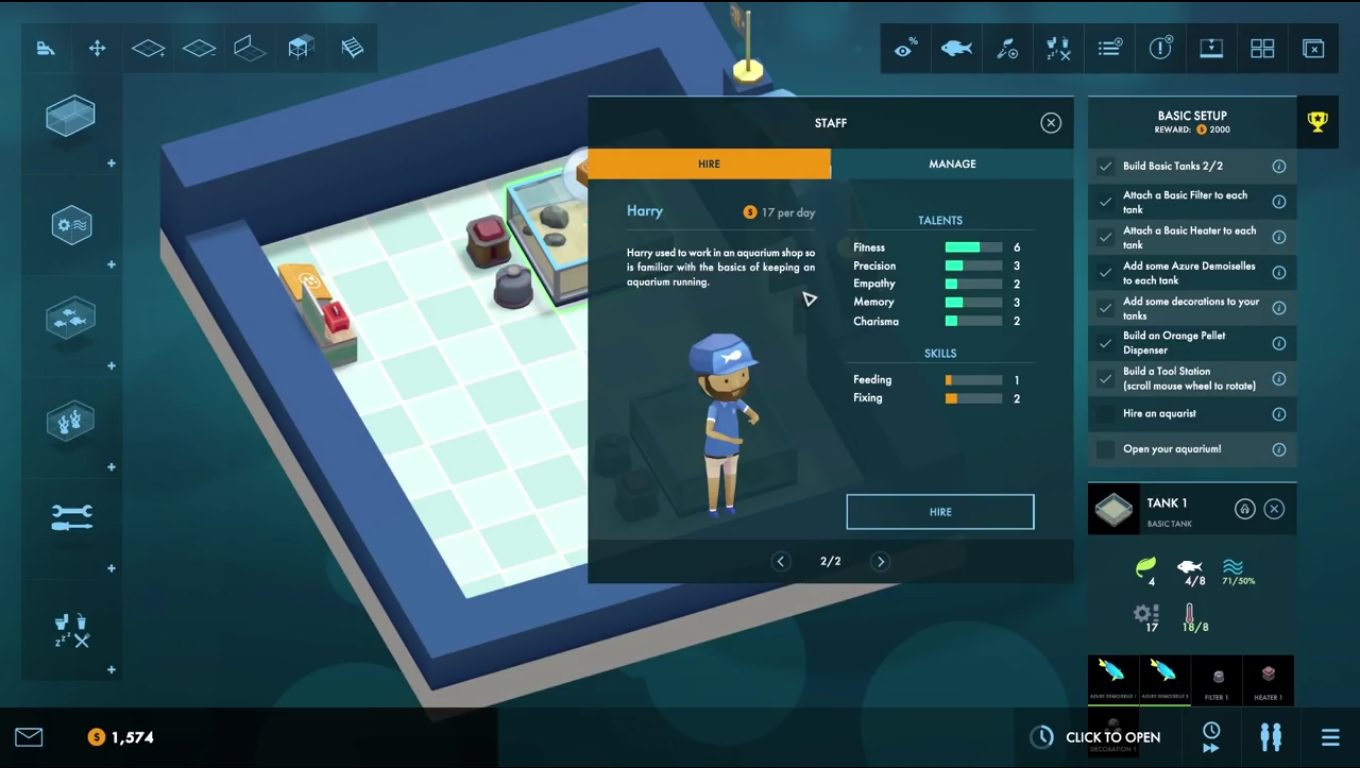 As you lay out your aquariums, which is a puzzle unto itself, filling them with fish will attract visitors. These visitors are your source for your two most important resources, Money and Ecology Points. You spend these resources to unlock new animals and equipment to further improve your aquarium, and just like all tycoon games, there’s a delicate balancing act between keeping things running smoothly and constant expansion that must be struck.

One interesting mechanic Megaquarium uses is the aspect of tank visibility. Each tank has a rating that demonstrates how often your visitors see it. Obviously, you’ll want this as close to 100% all the time, so you’ll need to plan your tank and room layouts carefully in order to ensure that your fish can actually be seen.

The game features a pretty thorough tutorial and information system as well, so it’s pretty easy to figure out what’s going wrong if you feel lost. The UI is very intuitive , and the actual level adjusts with the camera movement, making the game much easier to control overall.

The game includes both a Campaign and Sandbox modes, allowing for lots of replayability as you try to find the most profitable aquarium layout and contents.

Megaquarium also makes rejiggering your layout a very simple affair with intuitive controls and camera movement. Expanding your aquariums is also really easy, and fans of Big Pharma should feel right at home here as well.

In terms of performance, there’s not much negative to say. The simple art style and UI ensure the game runs smoothly even on lower-end hardware. Sometimes trying to suss out how the AI pathfinding works was a bit dodgy, but not a huge issue. Although later in the game you can direct the flow of customer traffic to guarantee that certain tanks are seen with the advent of one-way signs and other blocks. 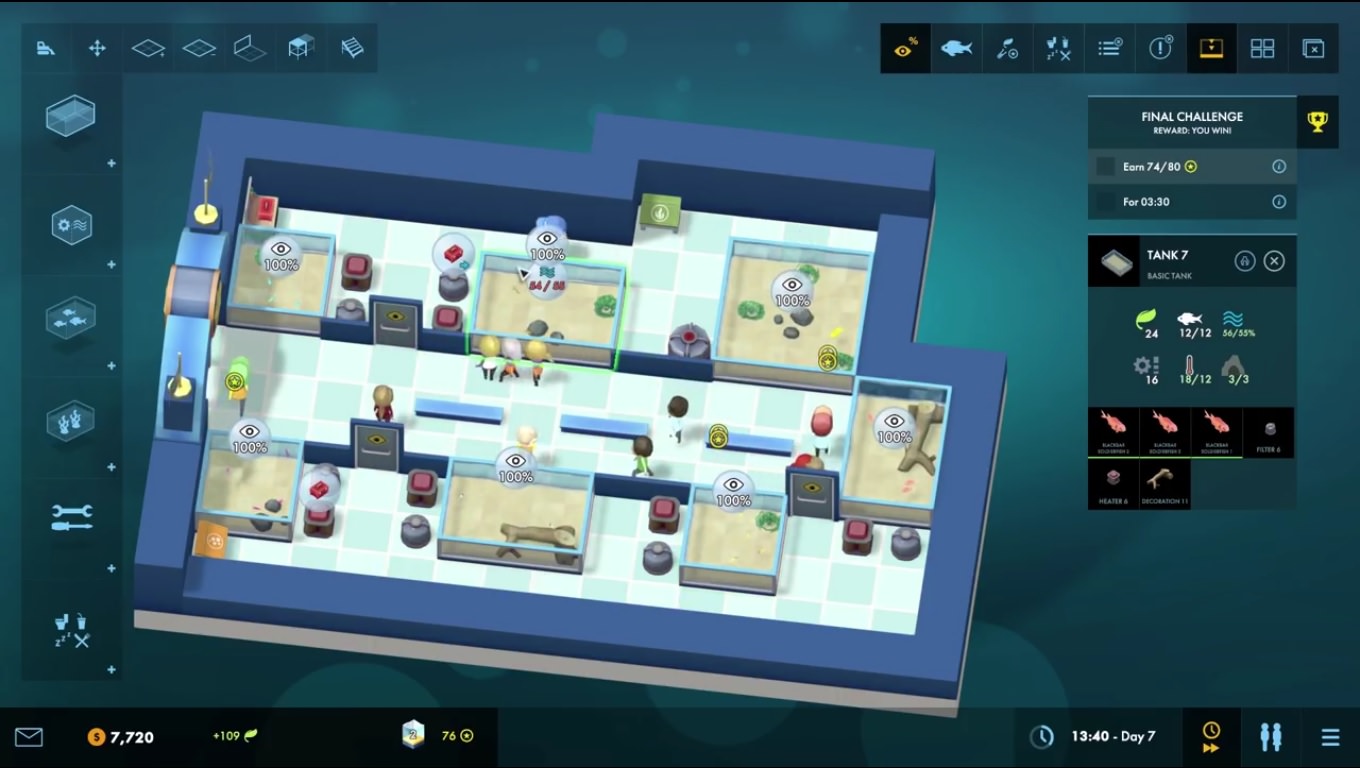 All in all, Megaquarium is a fun niche experience that’s good for a short trip, much like a real aquarium. You won’t be awestruck by its complexity or gameplay mechanics, but it’s a fun distraction from the din of more difficult games in the genre.

I do wish there was more variety of fish and decorations though. Another minor complaint was that there was no obvious way to undo a mistake  when placing walls aside from deleting the object once it’s placed. It’s a minor issue that will only happen a few times though.

Though my time with the game was relatively short, I definitely enjoyed it. Managing all the moving parts is absolutely a niche appeal, so genre fans, or those that enjoyed Big Pharma, would likely want to pick this up. The game is simple enough that even new fans who are drawn in by the concept should enjoy themselves. The game isn’t too difficult, so don’t worry about tearing your hair out in frustration like with much more complex tycoon games.