Food Fantasy is here, and it’s time to dig into this delicious mixture of gacha mechanics, anime waifus and hero collection. Food Fantasy is the latest offering from mobile developer ELEX, the same company behind Clash of Kings. So how does this new game hold up against the spicy competition, let’s find out.

The biggest draw in terms of base design is the art style and related elements, and while it will definitely turn some players off, the mix of the sleek anime style and a variety of unique characters can be appealing. Sure, it’s a staple of the hero collection genre that Food Fantasy is firmly planted in, but it works on a deeper level thanks to the blending of other mechanics.

A lot of the enjoyment from the game seems to come from a similar place as the core gacha mechanics. The joy of discovering the outcome of your efforts is supposed to be the engaging part, it’s meant to keep your coming back for a seat at the proverbial table. To encourage that, Food Fantasy includes a wealth of noteworthy voice actors and other subtle elements.

One good aspect is that most of the OP Food Souls are randomized, and while that does mean some players will get suckered into spending more money, it does level out playing field in competitive play. There’s no way to gain a combat advantage here other than consistent UR or duplicate pulls, and that’s still down to dumb luck rather than expendable income. 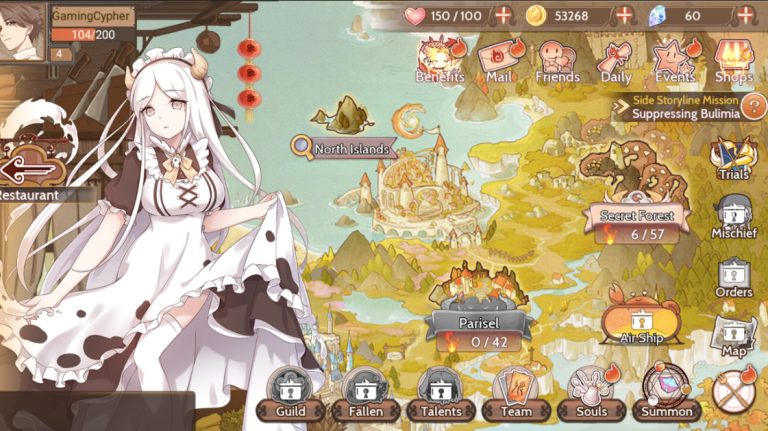 Gameplay is fairly simple and easy to understand, and being that this is a F2P mobile game, most of the idiosyncrasies are to be expected.

There are two main gameplay aspects in Food Fantasy. One is managing your restaurant, the other is the battle system that feel right at home in a hero collection game. On the restaurant side, the game is fairly standard. Players need to research new foods, develop new recipes by mixing together various ingredients, and help ensure that customers have good experiences at the restaurant. This part of the game can be fun, but it does not stand out from the multitude of other management simulators out on the market. 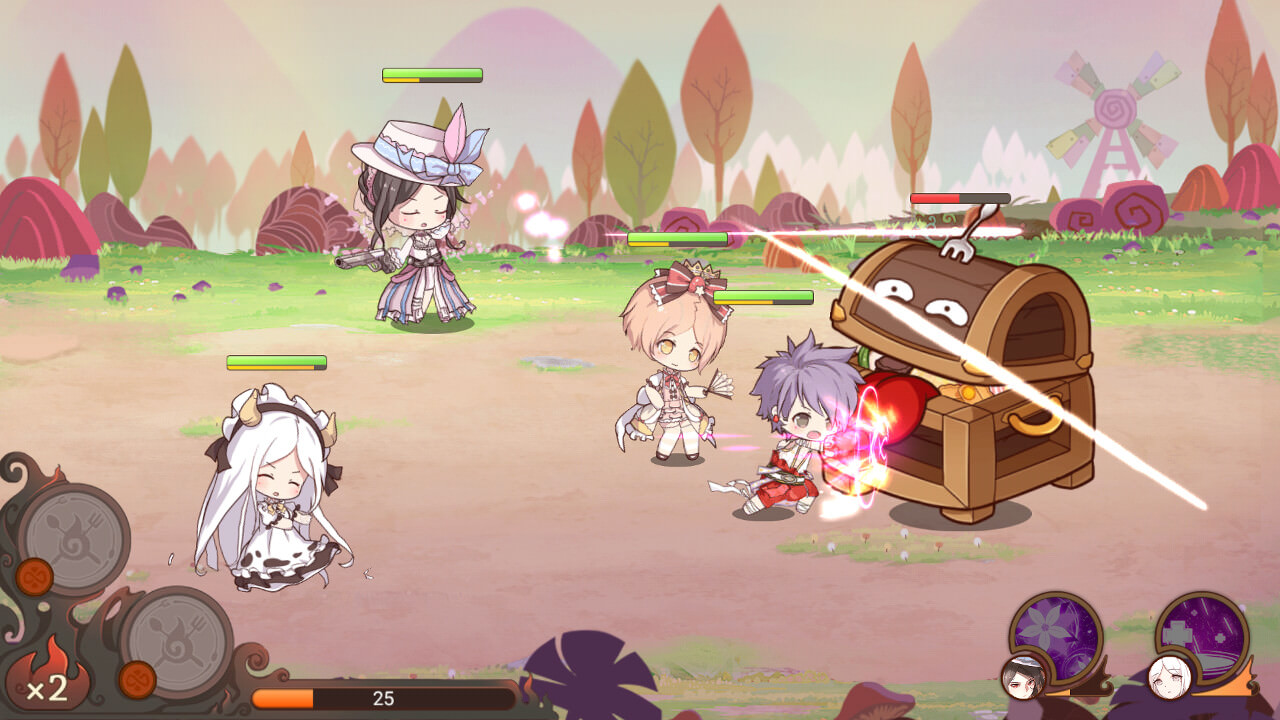 The battle system is a very standard grind up to high levels. There are a few distractions like deliveries, the Intimacy system and other minor upgrade paths for your Food Souls to keep you coming back, but it’s not super exciting at the first week or so of grinding. If you played any other hero collection game, all of this will feel very similar to you. And as someone who plays a fair bit of Dungeon Rush, this feels very familiar.

The Fame and related mechanics can be either a great or infuriating system depending on your tolerance for the typical “play consistently” attitude that Food Fantasy enforces. Casual players can still have fun with the game, upgrading their dishes and Food Souls when they get the chance, but those looking for a challenging restaurant sim might want to look elsewhere.

The mixture of timing and skill usage in battles adds a minor layer of tactics, but it basically boils down to a question of DPS and which side has the bigger number.

One of the bigger disconnects in Food Fantasy is that the two primary elements don’t seem all that well integrated. he fights and leveling system found in the game’s RPG elements don’t hold any real bearing on its restaurant simulation levels, and vice versa. It feels as though Elex mashed two separate games into one title, which makes Food Fantasy give off an extremely odd feeling.

The game performs well and looks great. If you like the art style, then more power to you because you’ll probably really enjoy this game. There were a few issues with non-English translations being shown in menus, but they were by no means game-breaking. Other than that, the game runs perfectly fine, and all the in-battle animations and effects look really spiffy.

As a Free-to-Play combination of hero collection and gacha mechanics, a lot of gamers will be infuriated by the persistence of these design choices in the whole of mobile gaming, but at least Food Fantasy gets it somewhat right. The game hands you enough rewards to gain new Food Souls and level them up, but the highest tier of player is heavily influenced by the need to be the best and to put money into the game. Ultimately, one can only fault devs so much, because as long as people continue to pump money into these slot machines, devs will continue to implement them. And while I think there are absolutely better and less manipulative ways to monetize mobile games, Food Fantasy isn’t shoving it in your face at least.

And the added challenges of the Hard-Mode stages, wave-based Catacombs, PVP-esque Showdown or day-specific Trials will keep you coming back, if that sort of thing interests you. But at some point there’s a feeling of repetition that sets in with these kinds of mobile games. And that feeling is definitely there in Food Fantasy.

There is a lot to like in Food Fantasy, but it’s not without it’s flaws. And even though I enjoyed the game quite a bit in my short time with it, I may not be coming back all the time. I will probably boot it up every once in a while, sometimes out of compulsion or boredom, other times because I’m genuinely interested. But I will say that Food Fantasy is good enough that I’ll never feel negative for playing it. Which is more than I can say for games like WWE Champions or Dungeon Keeper Mobile, which roadblock every bit of progress to foist players into becoming payers. For that alone, I have to give this game some praise. Which frankly says more about the state of mobile games than anything else, jeez that got dark.