CCP isn’t wasting any time on delivering what players have wanted for years in EVE Online at this years EVE Vegas celebration. We already saw how the developer plans to rework war declaration mechanics, but now there’s more good news.

So without any delay, let’s dig in to what CCP has planned for EVE Online.

The new line of Upwell structures are named the Fast Logistics Extensions (or FLEX for short) and will have a variety of useful strategic functions. FLEX are CCP’s attempt at finally implementing a form of player-controlled Stargates in EVE Online, so players are pretty excited. These new assets are meant to replace the Jump Bridges from POSes, and will fulfill many of the same functions. And since they’re built into the network of Upwell structures alongside Citadels and Engineering Complexes, they’ll have many of the same management and reinforcement mechanics of other player-owned assets.

Other than the player-controlled Stargates, There’s the “Tenebrux” cyno jammer and “Pharolux” cyno beacon – the latter of which will include access lists. You’ll also be able to configure your structure to allow only allies or open them to the public, and can even add a tax or fee for using your structures.

There’s a big problem though, at least judging from the player reaction to these announcements concerning FLEX. These new structures have a major logistics hurdle removed for short-range Supercapital deployments, Say hello to the Ansiblex Jump Gate. 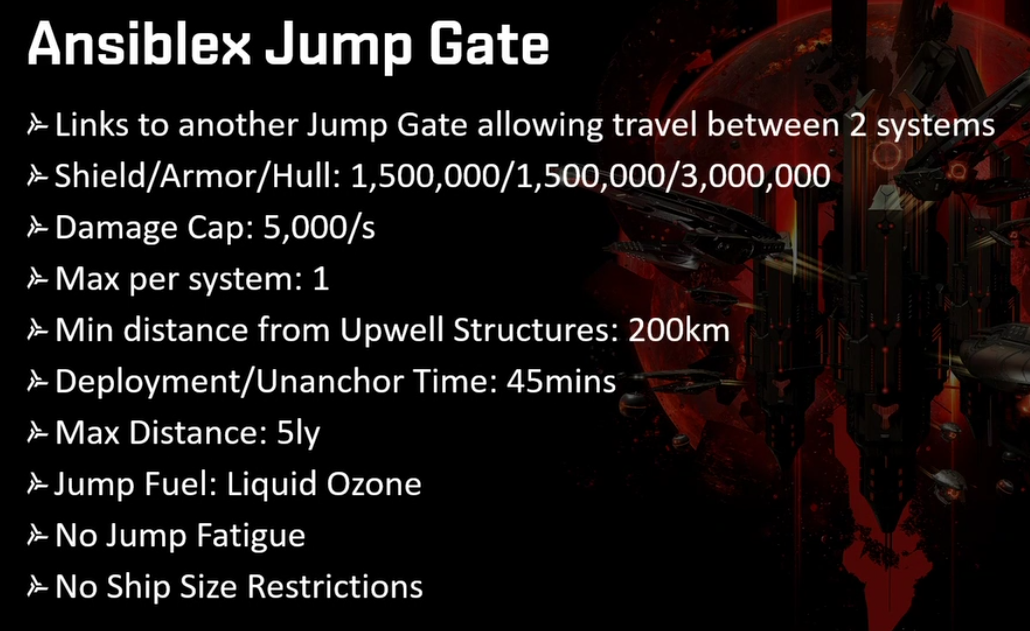 That “little” baby can now allow travel between close-range systems without the need to incur Jump Fatigue. (For a full explanation of Jump Fatigue, go here.) In short, this will allow Supercapital assets to be deployed within an alliance or coalition zone of control much easier than the existing Jump Bridge mechanics. Shaving off even one jump worth of Fatigue can expedite the travel time for these fleets by quite a bit. And as expected, some players are concerned about the long-term strategic impact, especially among NullSec blocs where the focus remains on massive fleets with Super support.

The restrictions for travel distance and number per system do mitigate their usefulness a bit, but it’s arguable to what degree.

The flipside of these gate is that it could encourage much more conflict between smaller gangs as it creates more ingress and egress points between strategically vital systems. I fully expects some skirmishes around both ends of these FLEX networks when they do go live.

Coming this Winter, fleet Abyssal deadspace runs will be possible. These runs will allow three frigates to enter and engage in normal Triglavian content for triple the rewards.

There will also be a new PvP element that allows players to square off in 1v1 match in an enclosed arena for a cache of special Triglavian rewards. The winner can also loot the loser obviously. These conflicts will see highly skilled PvP players duking it out in fast-moving cruisers with high DPS, so if you really want to see how good you are in a one-on-one fight, this is your chance.

Another new addition will come in the form of new Precursor ships in various classes. A Battlecruiser geared towards absorbing DPS will be released alongside Triglavian T1 and T2 Logistics Cruisers. There’s also a new Destroyer in the mix as well. The blueprints, skillbooks and materials needed for these craft can be earned by completing runs in Abyssal Deadspace pockets.

The new structures and PvE/PvP content in Deadspace isn’t the only cool thing CCP had to show this weekend.

The New Player Experience is also being further streamlined with new additions that condense information, delivering relevant information to the player all in one place. “The Agency should be a one stop shop for all content going forward.”, said CCP during their presentation. Everything should be easily accessible with this revamp. Star system and structure info, quests, player groups and so much more will be right at your fingertips through the Agency menu.

CCP also confirmed that the EVE client will finally switch over to a 64 bit client early in 2019, which allows the game to use more than 4GB of memory, as well as lifting some roadblocks keeping developers from implementing performance and quality changes to the core engine.