DICE has outlined its plans for Star Wars Battlefront II for the remainder of the year, starting off with July’s free Hero Starfighters update.

Check out the image below for all the details on updates and DLC plans for Star Wars Battlefront II in 2018. 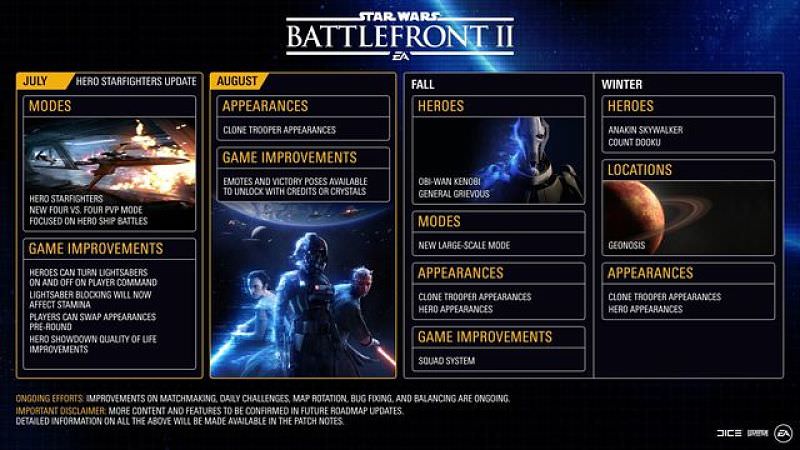 According to these announcements, there’s a lot planned for the previously troubled shooter. Since EA and DICE have pulled game-altering microtransactions from the FPS, it’s been a long road back to gaining player trust. Part of the devs plan to do just that is to keep adding in new content, and balancing existing content, all for the fun of the players new and old.

The first round of changes comes this month in July with the inclusion of a new Starfighters Hero mode. The newest mode allows you to strap yourself in some of the Star Wars series’ most iconic fighters from the Light and Dark Side, so expect to mix it up with the likes of Boba Fett’s Slave 1, Tallie’s A-Wing, Yedi’s Interceptor, and of course the Millennium Falcon.

In terms of non-gameplay affecting updates, Star Wars Battlefront II players can now change their skins between each round, so that’s pretty cool.

The Autumn updates are where things really start heating up. Two new Heroes, Obi-Wan Kenobi and General Grevious will lead the charge on a new “Large Scale” mode that has a lot more players and bots in it. No more details beyond it being a much more chaotic fight.

Finally, winter will see Anakin Skywalker and Count Dooku joining the fight. Anakin was a bit of a whiny git, although Dooku, despite sounding like a rip-off Count Duckula, was played by the late Christopher Lee and is an all-around badass. I mean, the guy defeated Obi-Wan and Anakin together, chopping off the latter’s arm in the process, and then managed to battle even Yoda.

By the way, both the Autumn and Winter updates will bring in new cosmetic appearances for a variety of characters and classes as well.