BattleTech started as a series of tabletop games decades ago. There are several video games from through the years based on the BattleTech franchise as well. Now, Harebrained Schemes has added their own giant-robot-them-up to the pile of slag and burned-out robots.

In terms of canon, this game is set in 3025, the Succession Wars Era of the BattleTech Universe. What that means is that it sets the player into an era of the universe where groups of noble houses in the Inner Sphere battle it out over control of space and resources. The backdrop for the main story campaign is that you’re a MechWarrior working with one of these houses, when an attempted coup forces you out into space on your own.

There’s an expanded singleplayer campaign and a multiplayer arena mode for players to enjoy. Some fans are concerned that multiplayer balancing may negatively affect the singleplayer experiences in BattleTech, but that doesn’t seem to be the case.

As one would expect, the missions and battles in this game are highly tactical. You field a lance of up to four bipedal battlemechs in open-ended, turn-based combat encounters that cover swathes of open terrain. Unlike many of its tactical peers, BattleTech doesn’t use a grid—this is a far more granular wargame than most, asking you to pay attention to not just the position of each mech but also its degree of rotation, its speed, and its relationship with its environment. One wrong move can end with your mech getting blown to bits. 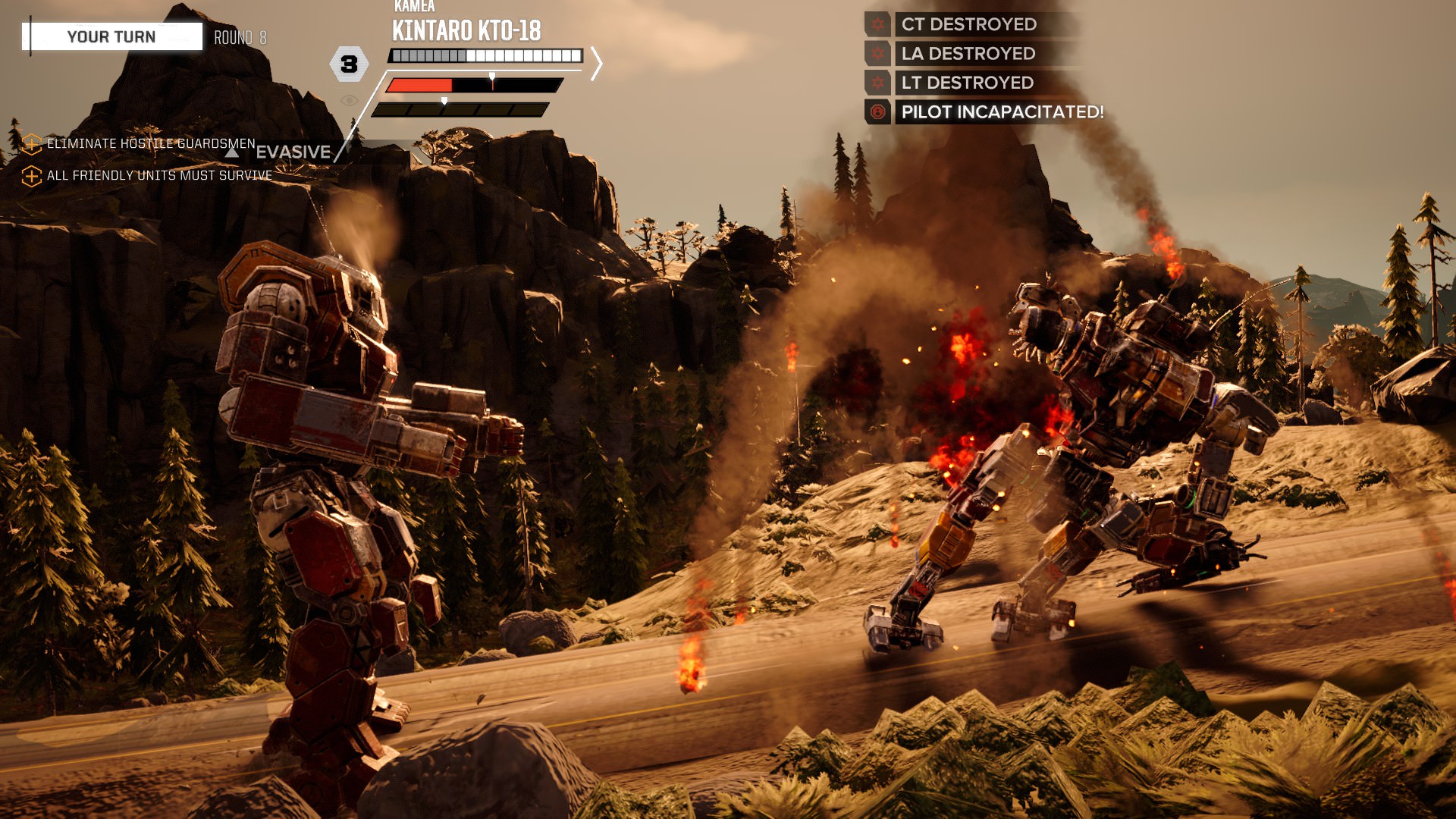 The management layer of BattleTech is built around the concept of running your own merc outfit, and it’s actually much more fun than I expected. Sure, managing facility upgrades for morale as well as mech repairs and retrofits sounds like it would be tedious, but because the UI is so well done it’s not a chore at all.

The sheer number of mech types and equipment mean that you’re not hurting for customization options within your lances either. There’s plenty of depth that allows a player to choose their own solutions to the given parameters of a mission. This player agency is a nice thing to see.

One issue that will hurt some players experiences is the random damage outcomes. Sometimes your mech will be able to tank multiple volleys of missile fire, sometimes a small tank will blow an arm off of your mech in one salvo. It’s this inconsistency that can ruin your plans and shift your entire mercenary company into panic mode.

Having to juggle all the different aspects of running your merc company can be a bit cumbersome, but not overwhelmingly so. When a pilot gets injured or a mech gets their arm blown off, it drastically changes the plans you laid out.

There’s also a fairly constant focus on spectacle at every aspect of the game. The tactical aspects of combat and the different mech types and loadouts make for an enjoyable visual experience. Playing your way through multiple missions while trying to manage your outfit is well-done overall. And it has sufficient challenge and does a good job of communicating the gravity and consequences  of your actions.

The persistence in your finances, lances and other management aspects is a constant reminder of your failures that forces you to “git gud”.

The interactions between characters is a little stilted at times, the characters don’t feel like they have that much depth. While it’s nice that the downtime between missions isn’t spent entirely in menus refitting mechs, it’s just a bit threadbare.

The one major criticism I would lay against the game, aside from minor performance issues, is that the threadbare tutorial will make it hard for some players to figure out what’s going on from moment to moment. 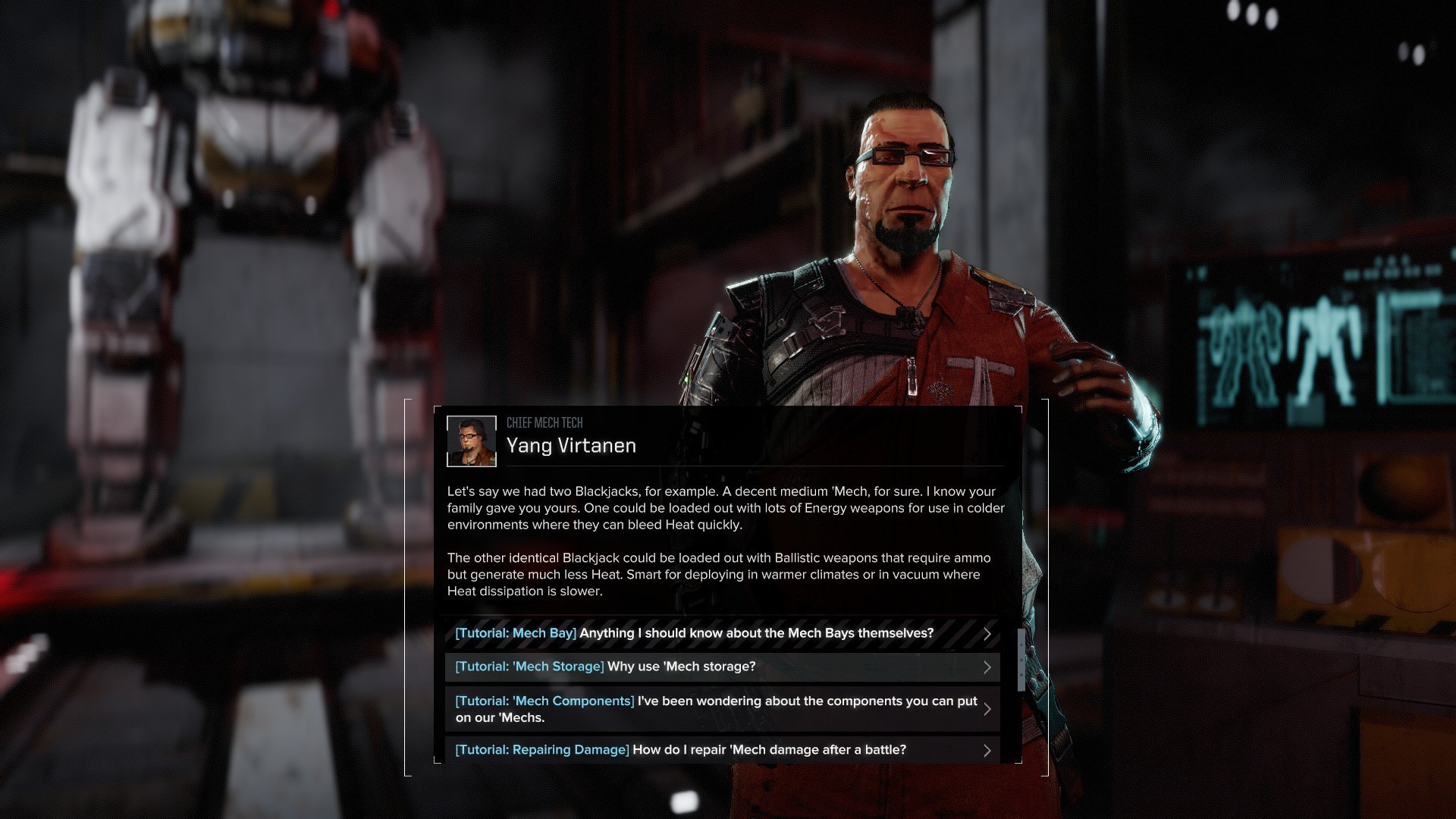 Even on a lower-end machine BattleTech runs fine. There’s some occasional slowdown in menus and during heavy action scenes, which is annoying. But it’s definitely not game-breaking.

Controlling your mechs on the battlefield is very intuitive, and the UI presents all the relevant information in an easily understood way. The menus for managing your mechs and changing out parts works similarly well.

The visual design of everything from the cutscenes to the mechs themselves has a very appealing style. Some of the in-battle visuals look a bit dated by modern standards though.

At $40, the pricepoint might feel a bit steep for more value-oriented gamers, but the investment is worth it. The multi-layered experience makes for fun and engaging gameplay. The tactical battles are always a challenge due to randomized outcomes, sometimes this can be frustrating if you’re struggling to pay the bills, but I had no problems due to careful planning and good luck.

The wonderfully done emergent story that interweaves story missions with the wider mercenary campaign is a real treat. Whether you’re looking for tactical robot combat or a heavier sim experience, BattleTech has your back.

There’s no “Iron Man” mode, so you can save scum if you want, but anyone who does will lose out on much of the challenge brought on by a mission going bad. This could be considered an oversight by some, but it feels like Harebrained Schemes felt the game would have been too unforgiving for new players with such an experience. And even without that option, I still had plenty of fun getting my mechs torn to shreds.

There are some minor issues with understanding what the UI is telling you, as well as performance, but those should likely be fixed in upcoming patches.

BattleTech is a long-running franchise with lots of games, and Harebrained Schemes has done a great job recreating the universe of humanity in a time of warfare and strife. It's that state of constant conflict and tough decisions that seems core to the design and execution of BattleTech, and it works out pretty well.

Despite some minor performance issues and mildly outdated visuals, the game is a lot of fun. The singleplayer story is well-built and tells an interesting story. The way that the experience seamlessly blends tactical wargames with a deep and rewarding management simulation is commendable.

As a whole, it's a strong contender for earning your money. The time you spend with it should be fun if the core concept appeals to you at all.