Albion Online – How To Make Boatloads of Silver

How do I get silver?

There are three main ways to accrue currency, outside of purchasing it with Gold, in Albion Online. Trading, Gathering/Crafting and killing mobs. The easiest of these for new players will undoubtedly be killing mobs so we’ll cover that first.

Silver is primarily dropped from humanoid mobs out in the world, hunting the areas ranked T2 or higher looking for rare resource spawns and high-value mobs is the bread and butter of the beginning player. Starting out, you’ll want to do a few things before you even consider gathering, trading or crafting for wealth.

The number one thing you should do is get your first Donkey mount. Using a mount will vastly increase the amount of weight you can carry while riding said mount, so using them on gathering runs is a must to bring back hundreds of kilograms of loot per run. Here’s a basic breakdown of the differences between the three mount types. But just for simplicity, assume that horses are fastest, Ox carry the most weight, and Donkey exist as a trade-off between the two. Once you get your Donkey go ahead and complete all of the starting zone quests, these will help you get a bit of starting Silver as well.

You’ll want to maximize your play time in Albion Online for peak efficiency. So Opportunity Cost will be a huge factor in deciding what resources to farm and which mobs to kill. Early on, you should just be focusing on rushing your tools to Journeyman ASAP. These tool upgrades will vastly improve the speed of farming T1-T3 materials, and you’ll be able to build a decent stockpile of these basic resources for later at the same time.

The next thing you should consider is optimum routes from resource runs to home. You goal here is to find an area that has high value, but minimizes both travel time and competition. The starting zones have quite a few areas with multiple resources in a short circuit. So look for areas where while you’re hitting one resource, another in the circuit is respawning. Finding high density areas with a lower concentration of players but also a high concentration of resources will be tough. So expect competition even in Friendly zones. People will consistently try to snipe high-value resources, so be on the lookout and have alternate paths you can take if another path you like is being hoarded.

Mobs and resources are constantly spawning in the world, and the loot contained by mobs will continue to grow the longer they are alive, this means that most mob spawns in highly trafficked areas will be quite bad for maximizing silver income from farming mobs. So stick to less traveled areas when hunting Silver from mob drops. You could also time your farming in certain areas when there are fewer players online.

Facts of life when farming mobs:
* Travel, freshly spawned mobs have the least amount of silver. Often territories that are perceived as too dangerous have the best rewards.
* Mobs that have been alive for a long time often carry up to 20 times the amount of silver of freshly spawned mobs
* Only wear what you can afford to lose, you should be coming home with more silver than the value of what you left home with.
* Group up! Find a Guild or some other Solo players and group up with them! Even just 2 players together can take on much harder mobs.
* Look on the world map! Find the closest treasure territories, they are often a good source of silver.

Finding a vendor or building that has a very low tax is a key to saving money. Sometimes it can be hard to find especially after the official game release since people are going to increase tax a lot.

You should not sell your gear at all cost if your aim is to progress crafting. There are a lot of players out there trying to sell their equipment through live chat or auction house. It is a quick way to make some silver, but your crafting progression can be heavily hindered as well.

But fruits and veg aren’t the only thing you’ll be growing. There’s tons of Animals to grow on your farms as well.

Your farm is located on your private island so you need to buy one. To do this your character must have premium status. (Once bought you won’t loose it when your premium status expires!)

You buy the island from a NPC in a city. Which city is up to you but be aware that ideally you visit your farm once a day so choose the city where your guild has its island or near the main guild territory. This way you can get your items to market or storage faster.

Once in this city you need to find the island merchant:

You’ll really want to upgrade your island to level 2 as quickly as possible, this will cost you 25,000 Silver up front. So aim for that amount with mob farming or Gold Selling before you even consider going into farming in Albion Online. 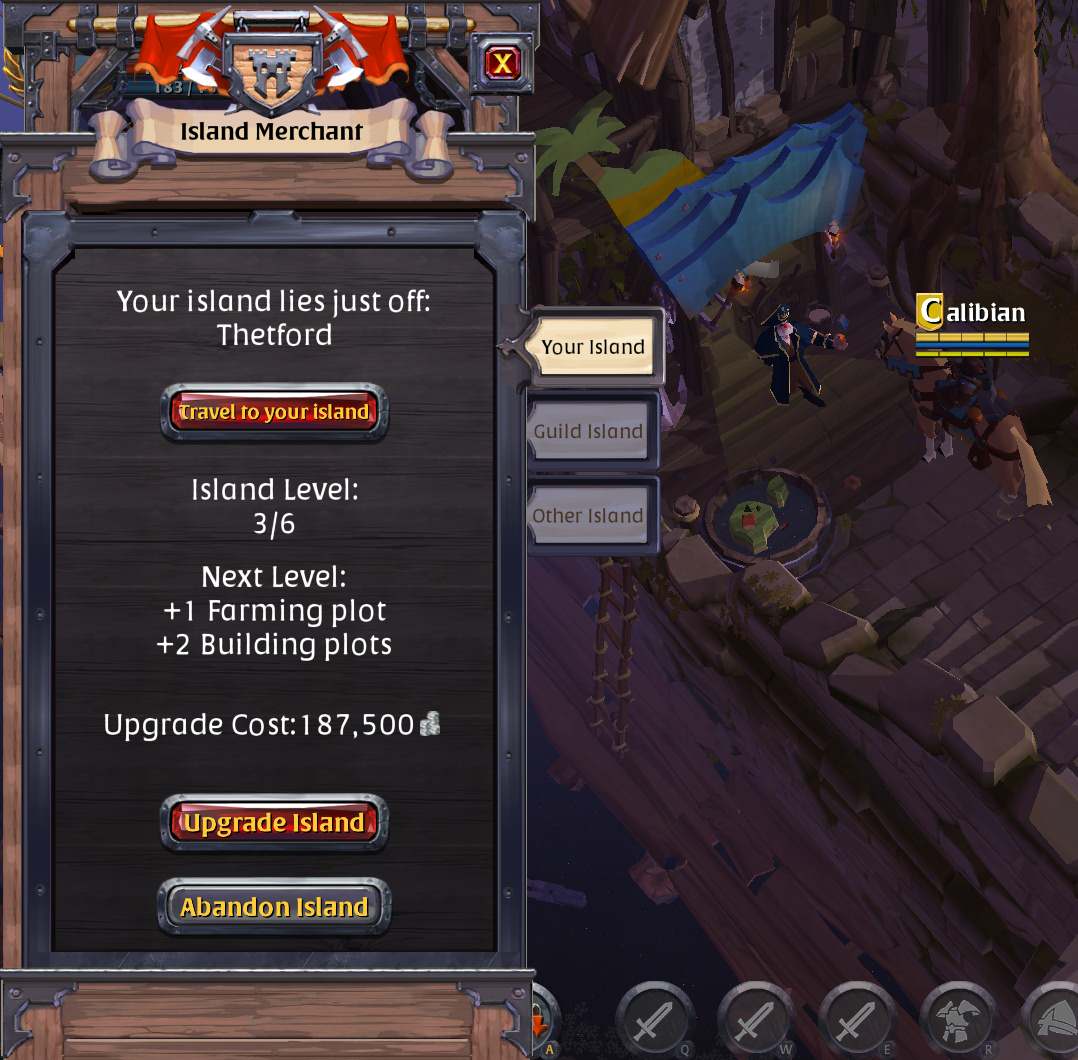 After you’ve purchased and upgraded your island, the next step is building your plots. Head to the northwest corner of your island to find your first plot. Open up the build menu, and build the Farm under the Farming tab. 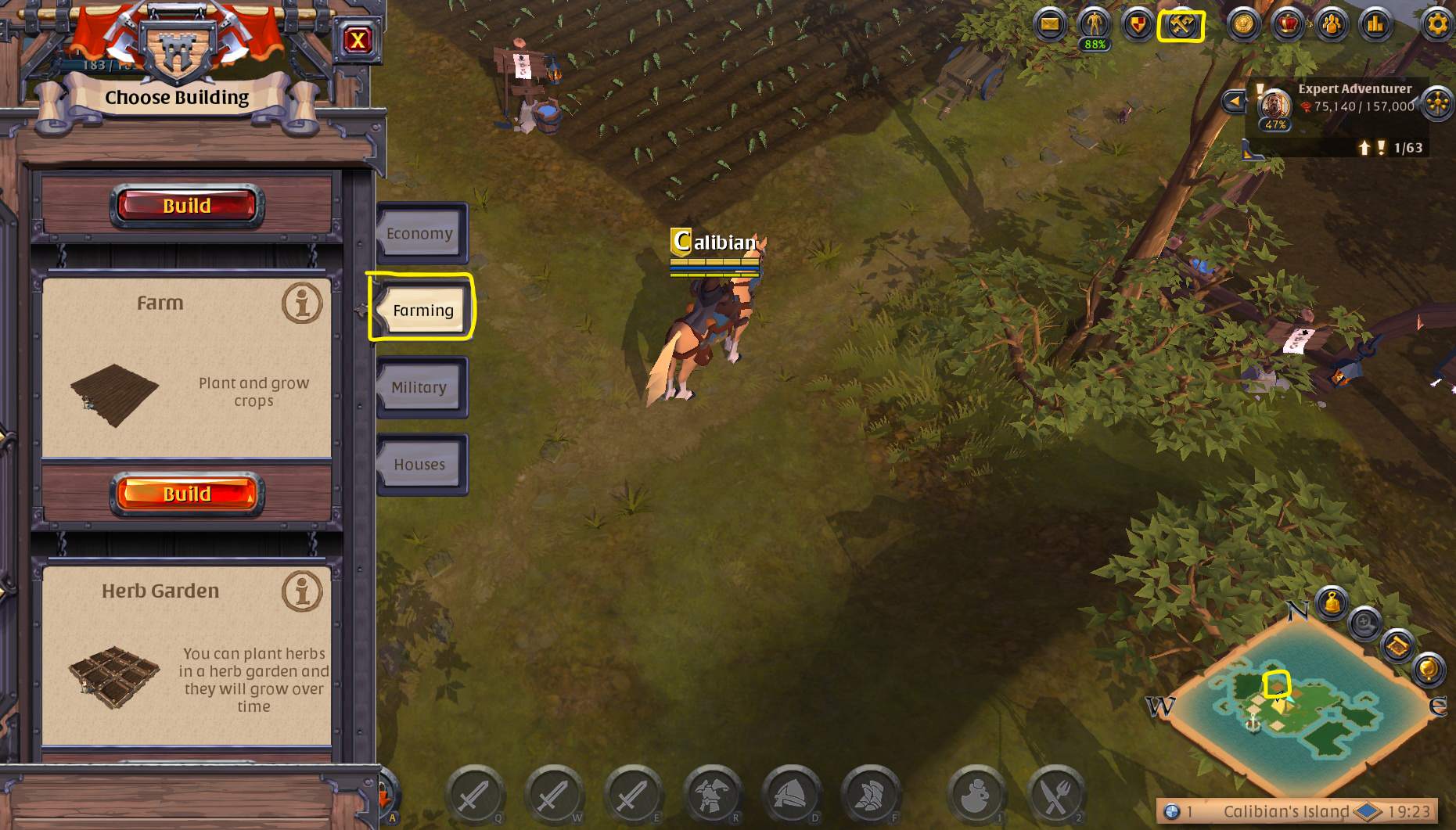 When you start with farming you can either buy carrot or bean seed. You can place 9 seeds on your plot so you should at least have another 9,000 Silver for carrots to start. Once you’re setup with your plot, it’s time to buy seeds. 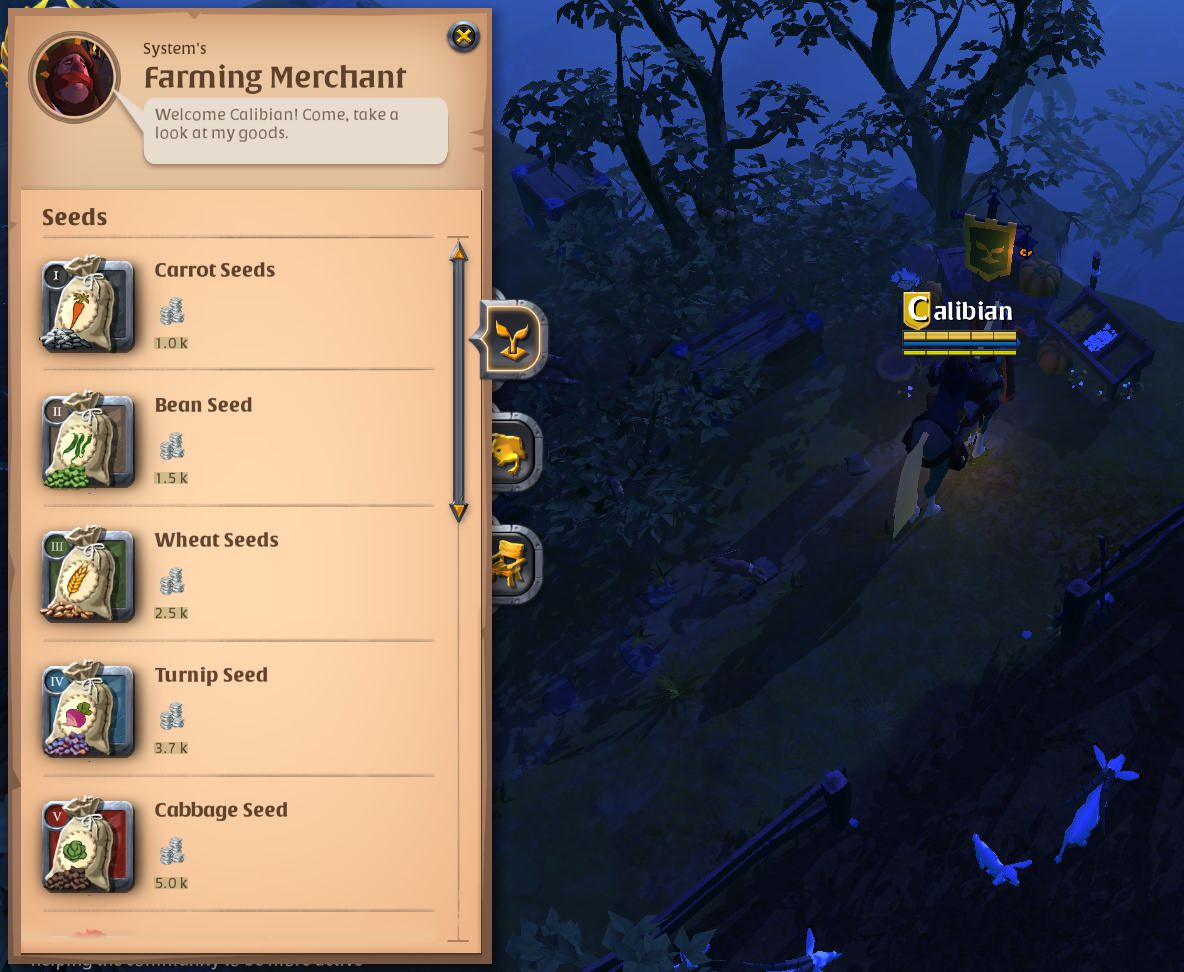 It’s at this point that you’ll have to start considering what to plant. This is the point where market conditions become vitally important. Depending on how long after launch you’re starting up with farming, you’ll want to check the market for both seeds and the finished product that they grow into.

Every crop has a “Projected Seed Yield” meaning the chance you have to get a seed back when you harvest the crop. When you water the plant your chances get higher this doesn’t stop at 100% as you can get more than one seed back. You can get 200% yield with enough watering. 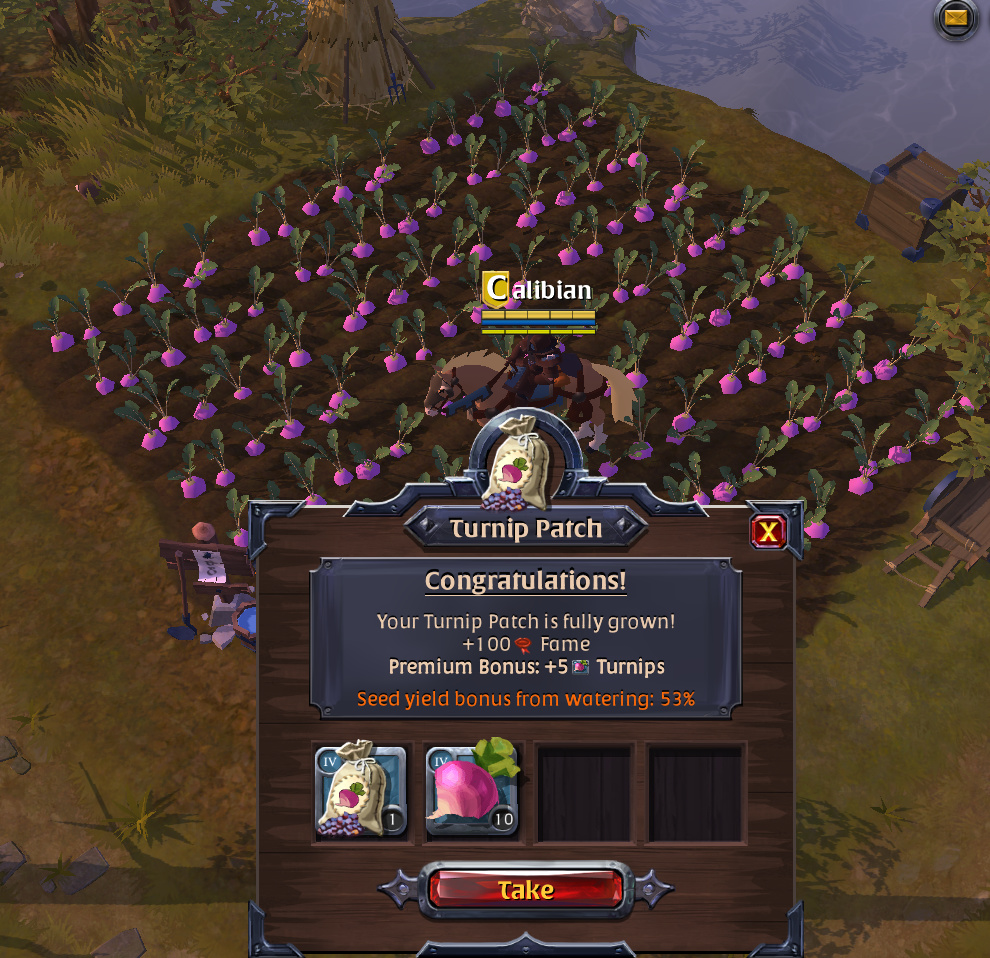 You pay for this with Focus. At the beginning the cost is 1000 Focus/plant. This Focus cost goes down the more you plant a crop. On your Destiny Board you have a skill for every crop that increases every time you harvest that crop.

The outcome of your crops is determined primarily by RNG, watering frequency and whether or not you have a premium account. Premium users get 6-12 food items per crop, normal users only get 3-7.

I would also recommend creating a simple spreadsheet that has a listing for each crop and the outcome for minimum peak yields attached for each crop. Then you can just plug in market values for each crop and calculate if there is any profit in growing a certain crop.

The process of selection for the best crops to plant is generally a function of value over time. In the beginning you should decide just how much active time you want to invest in your crop beds. As you just started, focus on the cheaper crops and playing the bubble of the early launch periods. There is a lot of Silver to be made in riding the wave of popularity that a surge of new players creates. The key though is getting off before the price starts dropping.

There are of course multiple other aspects of money making relating to farming and cooking.

Farming also allows you to raise animals starting by building a pastor on a farming plot. Once constructed, you will be ready to raise animals. First, you need to purchase baby chickens from a farming merchant.

After that, place them on a pastor. It is recommended to feed them with crops from your harvest. Then, you need to wait for them to grow. When an animal is mature, it will produce a baby. You can, then, right click a baby and use them again to grow an animal.

You can also pick up the fully grown animal which can later be butchered or used as mount depending on an animal. Some animals such as chicken can be left on a pastor to provide eggs which are an important ingredient for cooking.

There are currently 8 different cooking specializations which can be changed upon game release.

You can specialize all of them if you wish. However, it is recommended to only specialize in only a couple of specific types due to a high amount of required fame to level them. Once you decide on your cooking specialization, you need to cook required dish to progress that specialization.

For now let’s end this section with some basics about Focus and Gold.

Sell that starter Gold ASAP. Buying a Starter pack grants you some Gold, and prices will be very volatile in these first few months of open release, use that to your advantage. If you feel comfortable trading, try speculating on the price of Gold long-term. But the easiest move for new players is simply to list the Gold they get from Founder Packs at a higher margin than market, and set the listing for 1 month. This way you can maximize profit over a longer timescale. I’d recommend selling half of your Gold long-term, and keeping the rest to take advantage of price spikes. This means keeping a close eye on the Gold market every time you log in. Prices will shift quite a bit as more people sell their Gold, so weigh your need for 100K-200K Silver now versus more later during price spikes. 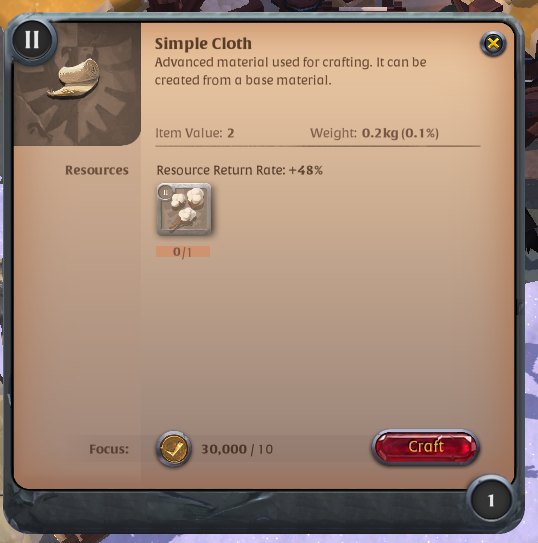 Focus is a bonus that players can use to massively improve crafting speeds and yields. RRR is Resource Return Rate, which dictates how much of your investment of materials is returned to you when crafting completes. For example, crafting in a town will result in a resource return rate of 15%. If you were to use 100 cotton to craft 100 linen, then you would receive a refund of 15 cotton. Crafting with Crafting Focus enabled increases the resource return rate. Crafting Focus will max out at 30,000 points and regenerates over time, even when you are logged out. The recovery rate is increased with a premium account allowing for a gain of 10,000 focus per day. The table below illustrates the default resource return rate before enabling crafting focus and with focus enabled.

How to place and move your Camp in Fallout 76 Wastelanders

Is Baldur’s Gate 3 coming to PlayStation 4 and Xbox One?