This fast-moving and highly flexible build offers multiple options for mapping and boss fights in Path of Exile.

This combo is very niche as it uses a lesser-used skill and some specialized Uniques, so I would say this is a build for more experienced players. That said, this build can switch pretty quickly to boss killing mode, all while maintaining a high Life pool and good damage mitigation. A simple Gear to Gem swap will have you back in the fight in no time, and while this build wouldn’t be well-suited to farming Uber Elder, it can be useful as a League Starter to carry you to Red Maps.

If you want to clear end game maps and kill most bosses in the game with ease, this is the build for you. The defenses of this build make it fairly tanky, so it’s even possible to do top-end content with experience and the right gear. You could drop Shaper with this build if you know what you’re doing.

If you’re using Kaom’s Roots, switch to Soul of Lunaris or Soul of Solaris for end-game boss fights.

Kill All for the bonus Passives if you’ve capped resistances, otherwise go for Alira for Resists. 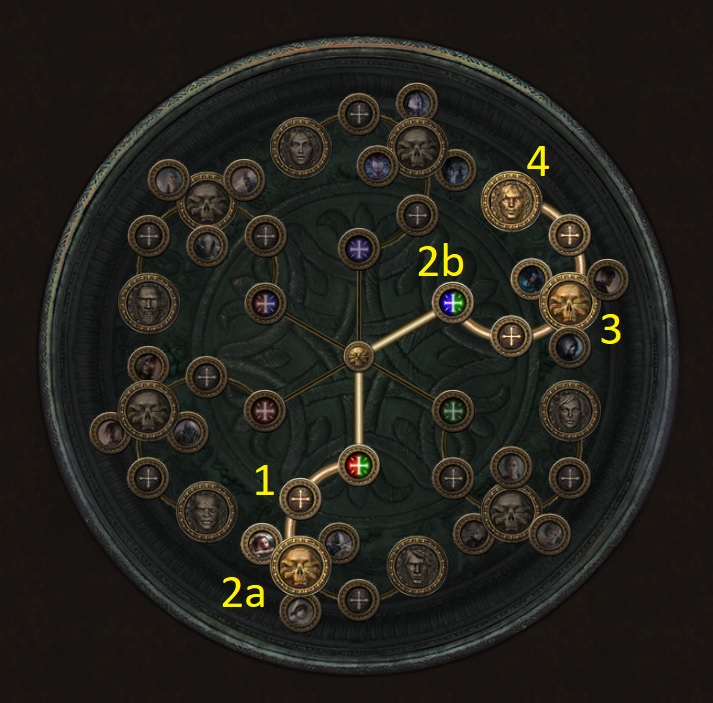 You could also use these Corruptions on Gloves:

You could also level this build using another Melee skill like Molten Strike will farming the currency to buy the two uniques that are optimal for the build.

Infernal Blow is the best leveling skill for this setup with Facebreaker.

Start off with Infernal Blow, link it with Added Fire Damage and Ancestral Call.

At Level 38, take off Ancestral Call and switch to Multistrike, and take off Faster Attacks to switch to Increased Area of Effect (Concentrated Effect for Bosses). You’ll also want Elemental Damage with Attacks linked at this point.

Around Level 40, Added Fire Damage becomes less useful, and could be dropped in favor of a Physical to X Support Gem. X is the type of Elemental Damage you would get the best effect from Wise Oak. For example, Physical to Lightning offered more DPS with that active.

You can Swap out Infernal Blow for Ice Crash as you feel comfortable with the DPS, and you can keep all your other Gems in place.

At level 60, you may want to switch Herald of Ash to Arctic Armour temporarily if you feel too squishy or die too much.

Prioritize Claw buffs on the Passive Tree to make leveling easier in terms of DPS.

We switch out Increased Area with Concentrated Effect for Bosses.

Elemental Damage is your secondary damage, but I would focus primarily on Physical.

Critical Chance to increase the likelyhood of massive buffs to your DPS.

Since this build uses Facebreaker, you’re scaling damage based on your unarmed DPS. This means stacking Physical and Elemental Damage as primary sources, and using a shield to add defensive flexibility.

NOTE: While leveling, aim for the following stats on any fillers you use in either slot.  This assumes you’re using another melee skill to level while farming the currency to buy the uniques you need.

Starkonja’s Head grants really good Life bonuses and increased Attack Speed. It’s an OK choice for this build as a cheap early game pickup. Replace it with an Abyssus later in mapping though.

A Rare with a pretty standard array of stats is another potential placeholder here. The real star for this slot that makes the build shine a good Labyrinth Enchant, check above for the recommendations for that. Otherwise, here’s the stat recommendations.

The easier option here is a Loreweave for the added Elemental Damage.

If you want to use a Rare instead, go for one with as much Life and Armour as you can get. Although I would strongly recommend sticking with a Loreweave for this build.

Darkness Enthroned, when combined with Abyss Jewels that buff the right damage and resists, is BIS.

Facebreakers is the basis of this build, and can be obtained really easily. Make sure to combine with the Claw nodes on the Passive Tree and Rigwald’s Curse to effectively scale DPS. No real replacement with this setup without major Passive Tree changes.

Kaom’s Roots are good stop-gap Unique due to the ability to keep your speed up, because you’ll need to be dodging damage while your attackss mop up.

Rare boots with max rolled Life, Resists and Movement Speed are great as a generic choice, but you may find yourself a bit more prone to taking hits than you would like. This one is more of a personal judgment call. Although if you’re running a high-end boss like Uber Elder, Kaom’s are your best bet.

Rigwald’s Curse is a vital Unique for end-game content as it allows much more DPS scaling through buffs to Claw Attacks.

An Amulet with a combination or high Intelligence, Physical Damage and Life is a good choice here for early game.

The Taming Unique rings are really strong here. The damage and resists are just insanely good for filling holes.

Rare Steel/Opal Rings are great for this build and it’s Physical and Elemental Damage. Use the stats below as a guide for that.

Lion’s Roar – This utility Flask is a great addition for an emergency reduction to incoming DPS. If you need to get out of harms way, quaff this and start moving.

The Wise Oak – This flask is great for both defenses and damage scaling with this build.

Taste of Hate – The damage mitigation by converting Physical to Cold is really useful, and the Freeze immunity potential is great for emergency escapes.

Watcher’s Eye – Get a version with added Crit Chance for a good DPS buff.

Shadow of the Tomb Raider shows off the Forge DLC

How to Get Aeos Gems in Pokémon Unite

How to catch the Barreleye in Animal Crossing: New Horizons