Hearts of Iron, and indeed the whole of the Grand Strategy genre has always had a fearsome reputation. A reputation of dizzily-complex mechanics hidden behind a maze of percentages, visual output, charts, unit icons and technology trees. As expected, Hearts of Iron 4 continues this trend, at least for brand new players. What it seeks to do from the get go is turn the indecipherable mess into a seamless flow of useful information for the players. The game is as complex as previous titles, but makes that complexity much more accessible.

At it’s core Hearts of Iron 4 is a simulator for World War II.  Whether the course of a single game will follow history or diverge wildly is up to combination of AI triggers and player choice. At the start the player can choose three major points. What year to start in, either 1936 or 1939 and what country to play as. The other major decision is whether the AI will follow a mostly static historical path, which can still be heavily influenced by player action, but this means the war will play out similar to history in most cases.

Getting into the game will take a little more dedication than demanded by contemporary Paradox offerings, though. While the user interface mostly does its best to be friendly and intuitive (the aircraft deployment section is a rare, clunky outlier), there can still be an awful lot of logistical and economic production information to process at once. The tutorial does a semi-reasonable job of introducing basic concepts like army battle plans and research trees via Italy’s occupation of Ethiopia, but by no means manages (or even attempts) to explain every aspect of the game.

You’re presumably supposed to fill in the gaps with the in-game links to the Hearts of Iron IV wiki pages. Except even post-release a lot of those pages aren’t even close to complete, so that’s not a great help. Their Beginner Tutorial video series is a more reliable bet for now.

The gameplay centers around leading your chosen nation through the quagmire of managing internal and external politics, military decisions, technology research and economic mobilization in the most chaotic period in human history. Who wouldn’t enjoy that? Each experience will vary wildly depending on the nation you choose. For example, it’s far harder to turn Greece into a powerhouse compared to its Fascist neighbors of Italy and Germany. It’s this decision making process that draws in longtime fans. The choices and hardships make the game exceptionally difficult and engaging. Or just maybe, some people want to digitally smash the fash by taking out the Axis powers. That’s the beauty of the franchise, while it does have a set end point, it’s often player goals that offer the most gratification.

Pulling off these goals is where the game shines. HOI 4 will throw a variety of starting scenarios, negative modifiers and events at the player for them to parse. Choosing the best outcome for your war machine is vital to success in these instances. From choosing what portions of the extensive tech tree to research, to planning production lines for tanks, planes and equipment make up a huge portion of the game. But even these hard decisions play second fiddle to the army planning and management. 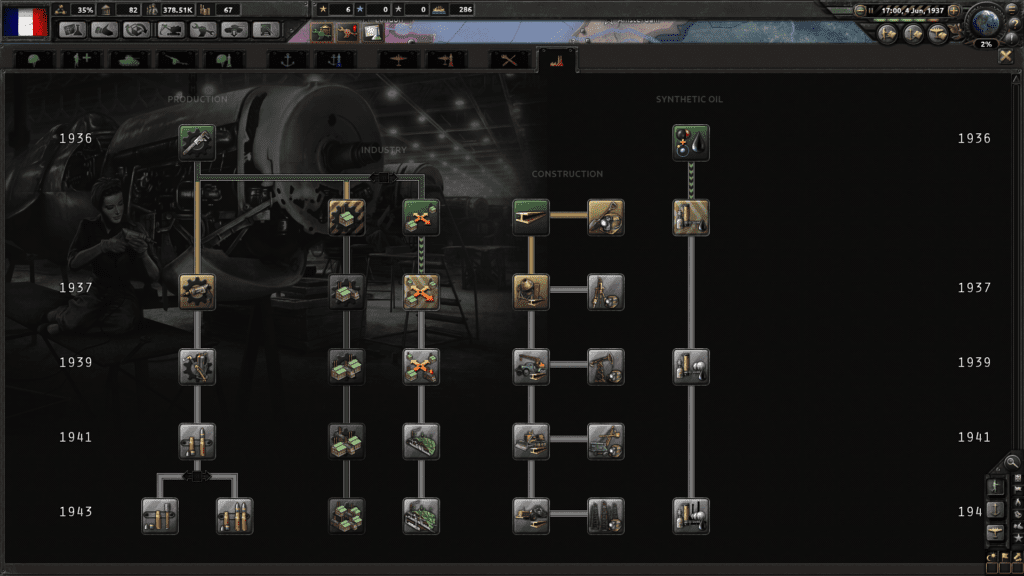 This is just one page of the massive tech tree.

The central mechanic of battle planning and preparations makes controlling dozens of divisions across multiple fronts a breeze. Although your production and research decisions will influence your success or failure in those actions. A few mouse clicks can draw up an invasion of an enemy country. Once you initiate the plan, the AI will take over end choose the best path of advance to achieve it’s ascribed goal. The system works most of the time, and makes the worrying about army movement that was a problem in earlier games much less stressful.

Army, navy and air management gets more stressful when AI allies are involved. At times, it feels like the player is the only competent power in the room, and the only one interested in ending the war. In one game, by 1944 only the US and USSR were standing between Axis domination. I watched for almost three in-game years while my allies Turkey, Venezuela and Germany landed tiny groups of divisions in Florida, routinely getting overrun.  The AI seemed incapable of organizing an effective naval invasion despite having a fair amount of both air and sea control. All while Italy (me) and a group of Balkan and Middle-Eastern states swept through the USSR. Another annoyance in this instance was the victory point system. Unless you work to subvert the national unity of your target, you have to control a huge pool of vital victory point provinces to override their unity. We finally overtook USSR in 1946 by pushing all the way to Mongolia, from Romania. The Axis finally triumphed in the US by succeeding in a Fascist coup in late 1947 that started a civil war. This allowed us to land in New York and sweep up their remaining forces in a couple of months.

This is where one of the more obvious issues comes to light, sometimes the AI is just dumb and plays overly conservative. At times it’s better to force the advance manually in order to leverage an advantage like encircling enemy divisions. But most of the time, the AI is somewhat competent. Some quirky UI choices make things like reinforcing existing armies or navies with new equipment a chore, although this can be remedied if one takes the time to meticulously plan, organize and name your military structure. Luckily, management of resource stockpiles and reinforcement of air groups and base units themselves is almost entirely automatic after initial setup. So all in all, this is a minor gripe. The biggest issue with the game is from a mechanics learning standpoint. As a player of previous titles, the massive changes had me a bit lost in my first few games. The sparse tooltips just aren’t enough to overcome the feeling of uncertainty I had that caused me to make bad decisions and effectively lose my first game as Italy. It wasn’t until I watched the video tutorial series produced by Paradox, and a few gameplay videos, that I got my stride and managed to achieve victory in my next few games as Italy and USSR. Newer players might feel the same issues with grasping core concepts. So I would suggest taking a sincere look at the game through at least the tutorial series before deciding if it’s a worthwhile purchase.

This game is going to make demands of those who’ve rarely (or never) played a Paradox title, and will even be a bit daunting for people like myself who are familiar with contemporary games like Europa Universalis IV. Some of the series hardcore might take the view (and I’ve seen complaints to those ends) that Hearts of Iron IV is too streamlined in comparison with its predecessors; but there’s going to be plenty of complexity here for the majority of players.

Crucially, that complexity isn’t arbitrary or impenetrable. With a bit of time and thought it does become clear how the game’s various systems work. Confusion will morph into confidence, and then a little admiration for the interconnected mechanics. At that point, Hearts of Iron IV blossoms into an engaging and rather fascinating alt-history way of fighting the defining conflicts of 1936-1950. Just be aware that it can be a tough, embattled road to get there.

Overall, HOI 4 is a niche title that's trying to make it's complex gameplay more accessible. And in some ways it accomplishes this with stunning ease. Some challenges will be difficult to overcome for new players, but revamped tutorial series' from the developer and the wiki integrated into the game make this easier than previous titles. Once a player grasps the core concepts, they will likely enjoy hours of virtual wars from just a single game, and that's to say nothing of the nearly limitless replay value.Being a strategy game, I would recommend it for most fans of the franchise first and foremost, but new players will likely find HOI 4 more easy to get into than previous entries. The game is not without it's issues in AI and quirky design choices, but these have mostly a minor impact on enjoyment.Performance-wise, the game will handle all but the most extreme scenarios with ease even on somewhat modest hardware. The game might begin to chug on lower-end machines with a couple thousand divisions in play, especially on higher speeds. Although any decently up-to-date build should have no issues in normal gameplay. No major crashes were encountered in my time with the game so far.HOI 4 is an enjoyable title for those looking for a challenge, it's not without it's shortcomings, but for those with an interest in the Grand Strategy genre, it's a worhty choice.