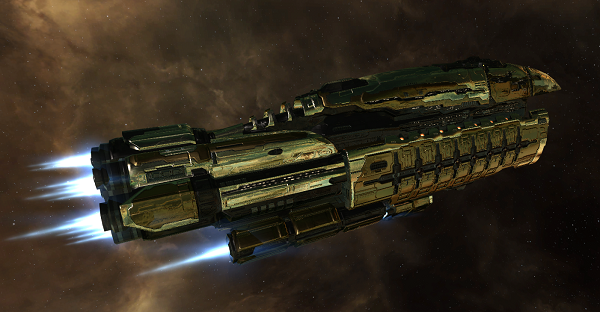 SAFIZON – The Imperial flagship TES Auctoritas  was sighted in the Norgoh constellation of Domain today, accompanied by a flotilla of escort vessels as she traveled across the Throne Worlds toward Ebidan, where it is rumored the flight trials of the most recent addition to the Amarr Navy are due to begin this week.

Auctoritas was announced as the new Ceremonial Imperial Flagship and officially named by Empress Jamyl Sarum I on July 20th, when she visited Amarr Navy Headquarters in Safizon to inspect the Royal Shipyards during the vessel’s initial construction.

Billed as the “most technologically advanced vessel in the Imperial Fleet”, details of her capability have remained under close guard given the fact that the Empress herself will be her pilot, however The Scope has learned from a number of subsystem contractors that she will benefit from the most advanced armor layering technology ever fitted to a vessel of Amarr design, as well as new class of Antimatter Reactors that are more than 30% more efficient than those fitted to the Amarr Navy’s standard Abaddon class.

The vessel departed Amarr Navy headquarters around four hours ago, with a number of military enthusiasts waiting to catch images of her polished, gold plated hull as she made her way toward The Throne Worlds.

It is expected that the vessel will spend up to two weeks in flight trials, testing everything from the construction and durability of her chassis, to the performance of her weaponry and engineering subsystems before she returns to Safizon for her final fitting and formal commissioning.