TGS this past week was a treasure trove of gaming content. And now we’ve got a whole bunch of news about Jump Force, the upcoming anime-laden fighting game from Bandai Namco.

A pair of gameplay segments were cut together from demos showcased at Tokyo Game Show, both of which can be found below. The first one features commentary while the second is pure gameplay, but both put a lot of effort into showcasing the characters from various popular anime franchise. We get to see Naruto, Goku, Blackbeard, Hisoka, Gon, Ichigo, Frieza and more in action across various stages. There’s a lot of different good guys and villains in these gameplay segments, so be sure to check them out to see if you can spot your favorites.

But it’s not just a ton of gameplay footage coming out of TGS that has fans excited for Jump Force. Bandai Namco Games also announced the details for pre-order bonuses and the Collector’s Editions of the game on the various platforms.

The Jump Force Collector’s Edition’s centrepiece is the massive 30cm diorama featuring Goku, Luffy, and Naruto. It also comes with a copy of the game in a steelbook case, and three art boards showcasing some of the more iconic characters. The Collector’s Edition will be available on Xbox One and PS4, and comes in at a staggering price point of $259.99 for the full set.

In terms of pre-orders, anyone who snaps up the standard edition of the game will get themed costumes for characters from the One Piece, Dragon Ball, and Naruto franchises. There’s also a unique lobby vehicle themed after Frieza’s hover pod from DBZ. 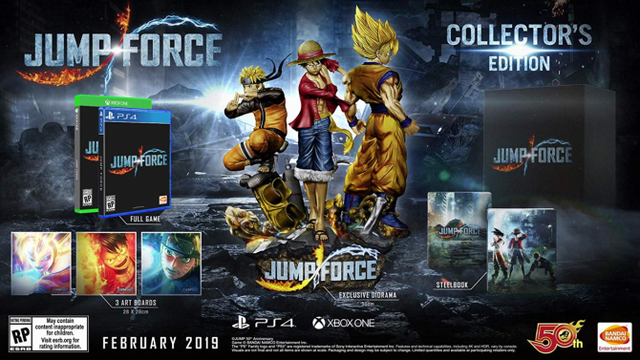 Jump Force is going to launch in February next year on PlayStation 4, PC, and Xbox One.

Grinding Gear Games answers questions about Path of Exile 3.9 and Conquerors of the Atlas

Undertale is getting a physical Collector's Edition on the Switch

Everything we know about Bonehilda in The Sims 4: Paranormal

How to Equip Layered Armor in Monster Hunter Rise