It’s highly recommended that those reading this guide check out both the New Players Guide to POE, and both the War for the Atlas Guide and the 3.0 Mapping Guide, in order to understand the basics that this new guide will build on. If you’re still looking for a potential starter build in Delve League, check out our recommendations. You might also want to check out the Delve Patch Notes.


This guide is a work-in-progress and will be updated over the course of the League.

Path of Exile patch 3.4 introduces the “endless dungeon” system that is the Delve. These increasingly difficult maps are essentially a replacement for the more traditional mapping end-game that POE is known for.

Niko the Mad has made his journey to Wraeclast, and now you need to help him explore the depths looking for Voltaxic Sulphite. The league adds an infinitely scaling dungeon called the Azurite Mine. When finding a deposit of Voltaxic Sulphite in a zone, Niko the Mad will open a Delve into the mines.

Once you enter the Mine, you’ll spawn next to the Crawler. Be careful, this is your only light source, and the Darkness WILL KILL YOU SPEND TOO LONG IN IT. Keep moving, and don’t worry the Crawler scales it’s speed to yours. Just focus on staying alive and keep mobs from attacking the Crawler. Each Delve is broken up by Checkpoints that mark the end of one trip and the beginning of another. These also act as Waypoints within the Azurite Mine, that way you can jump between certain tiers of levels after you passed them. You can use Niko’s shaft to jump ahead when leveling a new character. His shaft ends ten levels before your highest character level. So if you’re level 70, a new run can start from level 60 Delve content.

One thing to keep in mind concerns your subsequent characters delving deeper. Your first character in Delve is essentially a trailerblazer. Your other characters can follow their lead on successive Delves by using a secondary tunnel down. This secondary tunnel is created every 10 levels deep or so.

After you find your first cache of Voltaxic Sulphite, Niko will open a path to the Mine Encampment. This is the hub for Path of Exile 3.4 and it contains some very useful tools.

Head over to the Voltaxic Generator and check things out. If you want, you could also craft a couple Flares or some Dynamite at this point. Once you’re ready to move on, click on the Subterranean Chart and you’re ready to begin your Delve adventures anew. 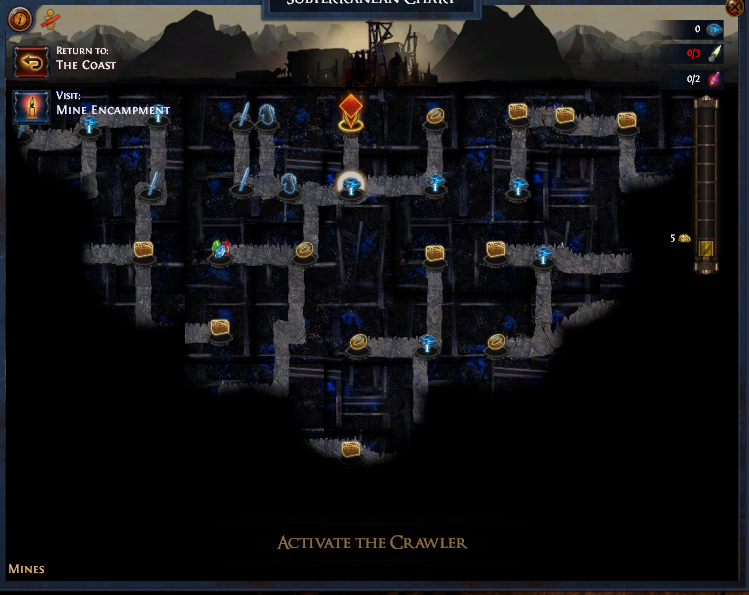 So here’s the basic idea, the further down in the Mine you go, the higher the base level of the content in runs on that level. Moving horizontally across a level will give you several Delves that are all the same general level. Bear this in mind when progressing so you don’t accidentally wander into a death trap.

As you look at the Subterranean Chart, pay attention to each of the nodes. You’ll see markers for Armor, Weapons, Currency, Azurite and more. These markers denote what kind of rewards you can receive from that particular “Room”.

Sulphite is the minable resource which you use for the dual purpose of powering and upgrading the Crawler. You’ll find piles of it in every area during Delve League. You’ll also need it to craft Dynamite and Flares for your adventures. So in short, be sure to always have more on hand. Bear in mind that Dynamite is thrown in the direction your character is facing, not where your mouse cursor is placed.

Sulphite in the wild

The Crawler is your lifeline during Delves. The Crawler is also the mechanism by which loot is primarily picked up during a Delve. So kill mobs closer to the Crawler to ensure your loot is automatically grabbed. Once you reach the Delve checkpoint, all the loot from that run is dropped.

As you’re progressing through the Delve, be on the lookout for cracks in the walls around you. You’ll know that you’ve found a destructible wall because it’s model slightly sticks out from the surrounding area. These are areas of wall that can be detonated with Dynamite. Exposing these hidden areas will often lead to hidden treasure chests containing all manner of loot. Most of the time you’ll need to use Voltaxic Flares to carve a path through the Darkness to find these hidden troves. Although you should use them sparingly and get out of the Darkness ASAP.

As for finding the Fractured walls, the best way seems to be running along the light path while dragging your cursor along the edges looking for a red outline that isn’t a mob. The walls themselves will somewhat resemble a wooden palisade in its look as well. Sometimes the walls will spawn a couple screens away from the light path, so bring Flares.

As of patch 3.4.1, Fractured Walls will always pop in a single Dynamite.

Another couple things to look out for are Forgotten Chests, Azurite Caches and other goodies. These hidden treasures will be scattered randomly along the Crawler path in each Delve Area. Look for things like blue beams of light, tiny golden sparkles or other visual cues that stand out from the surrounding darkness. The strategy I found less stressful is just to backtrack to Delves that have already been completed and then hunt for loot. Chasing after the Crawler and taking a death isn’t worth the risk, at least in early Delves.

When you’re following the Crawler check the small nooks and crannies off the main path you’re following for golden sparkles and blue lights, these are signs that loot drops are in those areas. It’s very common to find extra Flares and Dynamite as well. It’s definitely worth backtracking once you finish an individual Delve run to pick these items up.

Here are some telltale signs to look out for that denote loot or spawns of rare items.

The other reward for completing certain Azurite Delves is a pile of Azurite. This is banked on your characters, and can then be turned over to Niko in exchange for things like Crawler upgrades and Resonators. 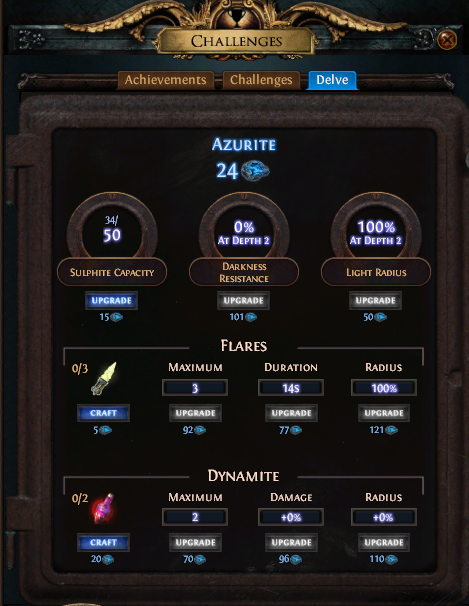 There are lots of stats that can be upgraded with the Crawler. The primary stat categories are as follows:

For the full upgrade tree and costs in Sulphite for each level, head over to POEDB.

Throughout your journey into the Azurite Mines, You’ll eventually encounter Timeworn Reliquaries and their Keys. (Make sure you’re using a good loot filter to highlight them.)

The Timeworn Reliquaries are special keys first appeared in the Legacy league, and can be exchanged for a single random unique item. These are essentially the new version of Uniques for Delve League. Although these Delve items won’t have Legacy rolls. For all of the Uniques that can drop from these chests, check here.

One of the major new additions coming with Delve League concerns crafting, specifically with Resonators and Fossils.

These new socketable currency items work just like Alchemy or Chaos Orbs, but you can modify the RNG of the potential rolls by placing Fossils into them.

There are two types of Resonators – Chaotic and Alchemical. These have the functionality of Chaos Orbs and Orbs of Alchemy respectively. Each can have a number of sockets. Ones with many sockets are harder to find than ones with few.There are between 1-4 sockets on each Resonator depending on rarity. Primitive, Potent, Powerful, and Prime Resonators can be found. You can also purchase some Resonators from Niko in exchange for Azurite.

The types of fossils currently in the game can be found below. The POE community has also managed to put together the drop biomes for each fossil type as well. The name of the Delve zone corresponds to the fossils it can drop.

*FW means it can only be found behind Fractured Walls.

POE YouTuber ZiggyD has managed to string together a couple of guide videos on some methods for both farming the Darkness in Delves for currency and loot. There’s also a guide for finding hidden side areas reliably.