Millions of copies have been sold of Monster Hunter World. Players are hunting Elder Dragons and other beasts left and right, and some players are no doubt getting lost in the massive depth of the game. We’re here to help you though. Armed with these simple tricks and zone details, you too should be able to vastly improve the amount of crafting materials you can gather.

Finding resources is crucial to success in Monster Hunter World, this is because those resources are needed to craft weapons and armor that are themselves the key to hunting.

The map displayed below will teach you a circuit that you can use to collect all the basic materials you will ever need.

Hunters will need to “start from the node on the cliff in front of the central camp” and follow the color-coded path. Players should note that the green path will have the hunter above ground and the red path means to go underground. By the time the hunter has finished the described path, the nodes will respawn, and the player can begin again.

This infinite mining map run is best done as a high-rank hunter, as this will allow high-level nodes to spawn and be accessed.

You can find a full map of the run from Reddit user MisterTopside below: 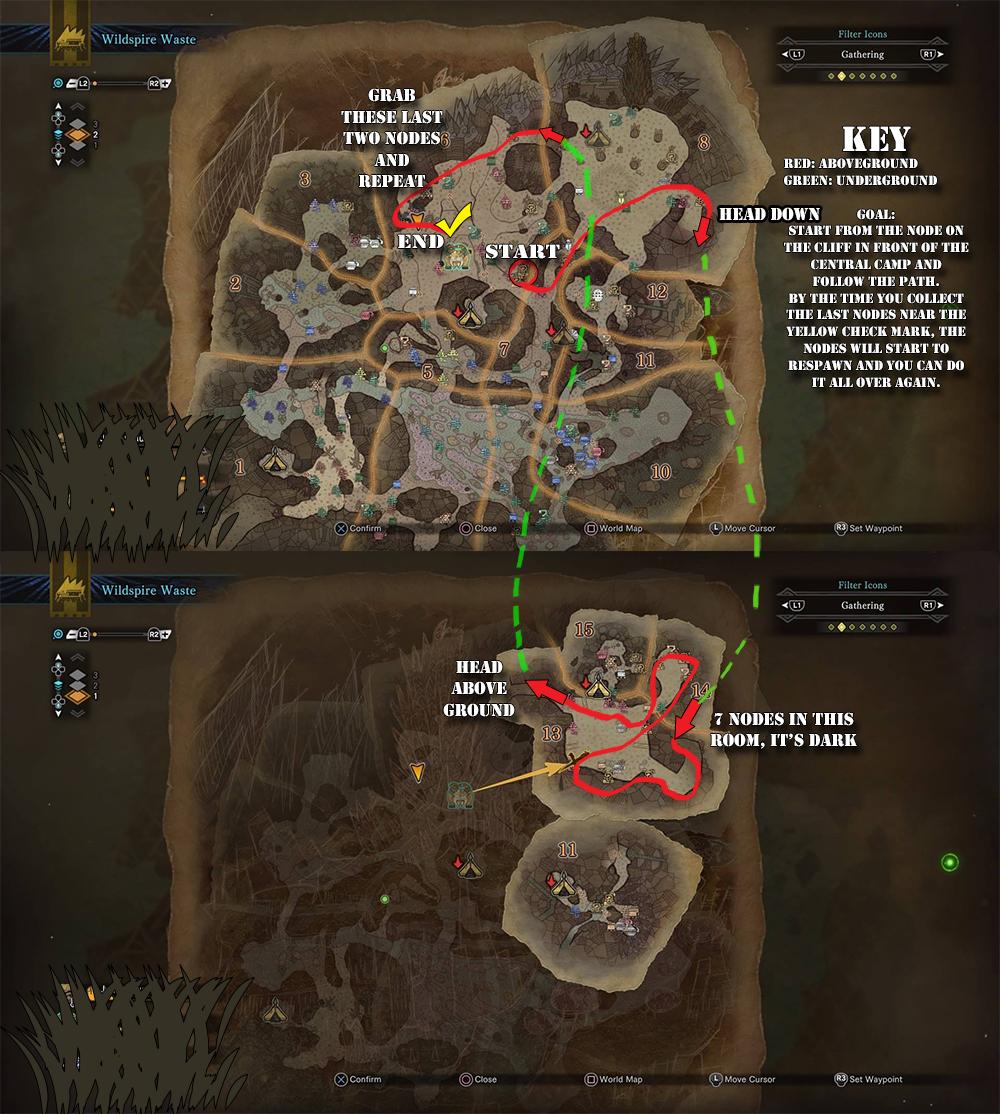 Getting Some Coral Bones and Coral Crystal

Coral Crystal and Coral Bone are particularly significant items in Monster Hunter World, for they allow players to craft a variety of the action-RPG’s most powerful weapons, as well as some of the best armor in the game.

Those looking for the best place to farm Coral Crystal would do well to visit the border between Areas 10 and 11 on the Coral Highlands’ map. There ought to be three outcroppings on the western side of Area 11, which is northwest of the Northeastern Camp. Additionally, Area 20 should also yield positive results in the search for Coral Crystal to mine.

There are several respawning bone piles for Hunters to collect throughout the Coral Highlands, but the best place to farm them is Area 2 on the map, which will have three spots close together. Follow the path running through Area 2 from south to north, head east at the fork, and players should see all three along the way. The first two ought to be on the right-hand side, with the third one being on the left.

You can find a full map of the run from Reddit user MisterTopside below: 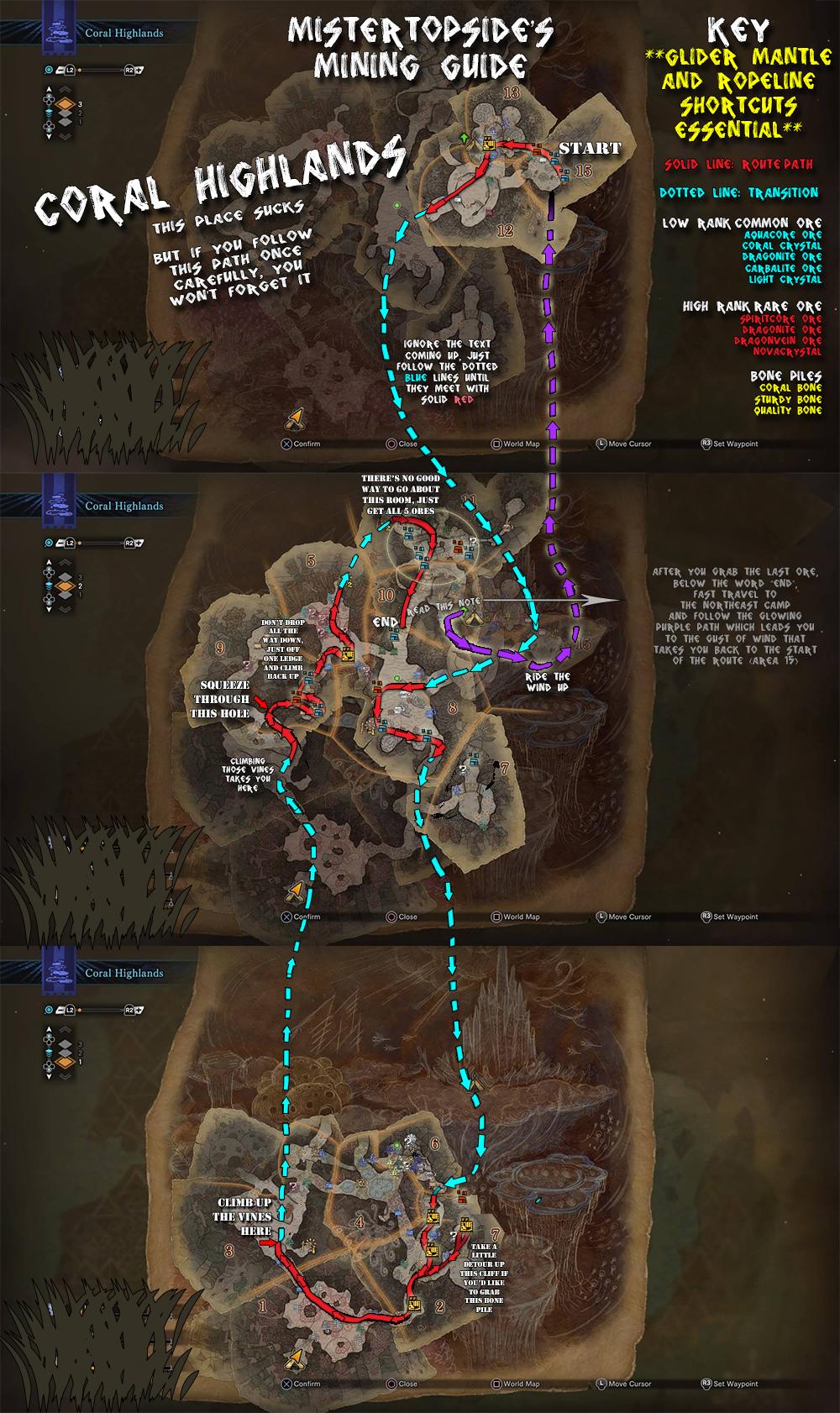 Shout out to MisterTopside once again for another area farming map for Monster Hunter World. This time we’ve got a guide for farming materials in the Elder Recess zone. This zone loop is pretty long, but has a huge wealth of Ores, Stones and Bones available to the player. Just be sure to bring along some healing items and cooling potions to deal with the environmental effects in these areas.

As usual, you should try to bring along gear that boosts gathering speed and effectiveness if you have it as well. This means the Origin armor set will grant those that preordered a bit of a bonus in the form of Forager’s Luck and Master Gatherer piece bonuses. 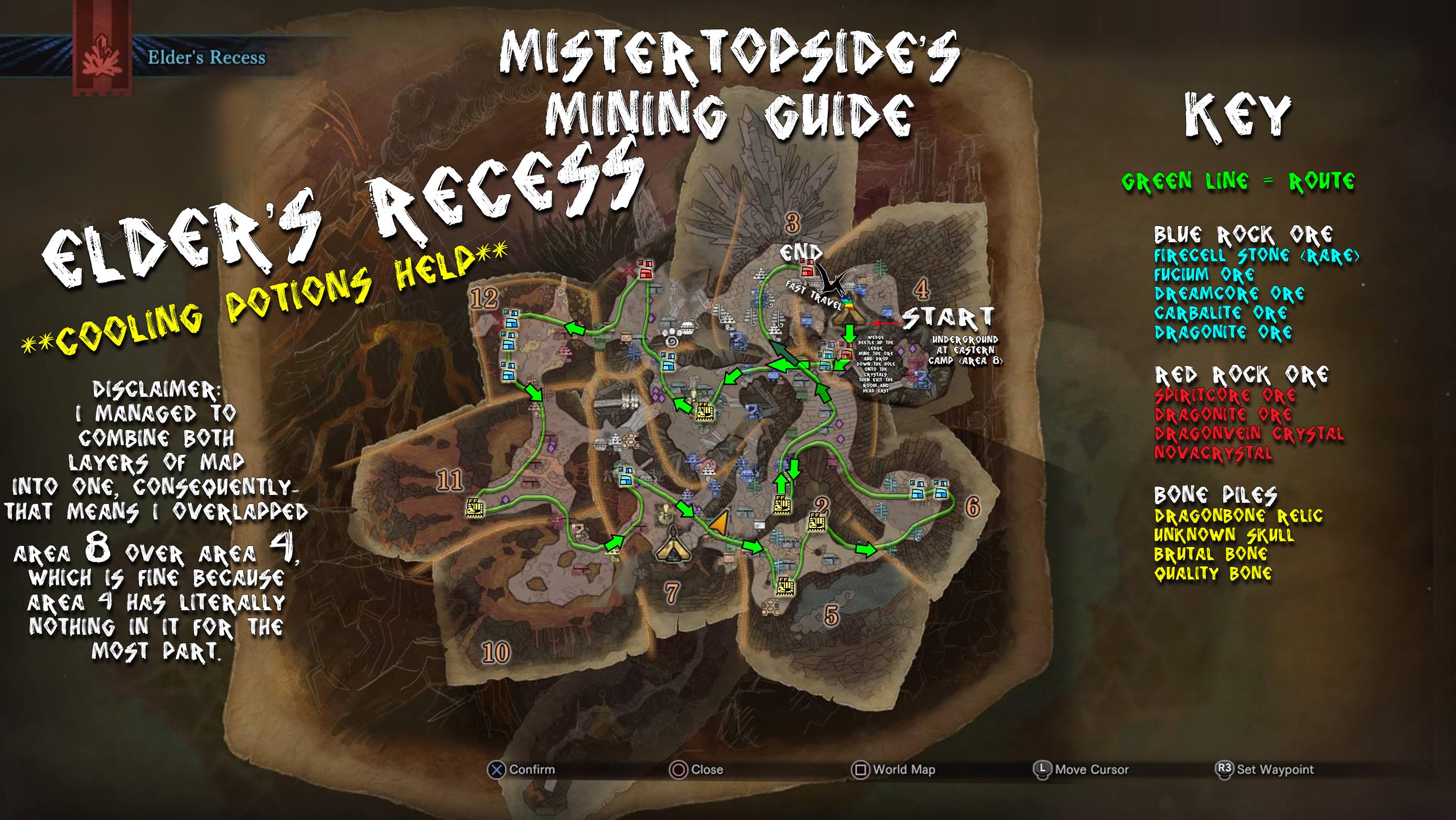 One of the rarest crafting materials players can collect are monster gems, but there are steps players can take to increase their odds of obtaining gems/rubies while playing Monster Hunter World.

The obvious approach to increasing your farming yield is using the Plunderblade, but let’s cover some other angles you could use.

Resource center bounties are another way players can earn gems and rubies in Monster Hunter World. If players complete all the weekly limited-time bounties, they will be rewarded with a Gold Wyverian Print, which can be used at the Elder Melder to craft specific monster gems and rubies.

Finally, the last way players can obtain these rare crafting materials is by speaking with the Argosy. As pointed out by YouTuber Mtashed in the video guide above, this method is the least reliable as the Argosy may not necessarily have the gems and rubies that players want.

How to get the Plunderblade

The Plunderblade is one of the most useful items in all of Monster Hunter World. The Plunderblade is a tool that players’ Palico partners can use in the game to dislodge rare resources from the creatures that one fights in the game. Whether it’s teeth, claws, carapaces, or other objects, if fans’ cat companions have the item in tow, it can yield up to 15 pieces per enemy.

Combining this item with the other tips in this guide will turn the player into a crafting powerhouse.

Head to the Rotten Vale

For starters, to undertake the Grimalkyne Palico Tribe quest in the Rotten Vale and obtain the Plunderblade, players will need have completed the three previous Grimalkyne Tribe quests, which are all region specific. This means that you will need to have encountered and helped the Grimalkyne Tribes in the Ancient Forest, Wildspire Waste, and Coral Highlands zones in order to proceed with this next part of the quest.

You can find the Tribe easily by heading to Area 13, which can be reached easily from the realm’s Central Camp. This is where one will often find the Odogaron skulking about. Should the monster be absent from this location, though, the Palico-like Grimalkyne can be found who will flee quite quickly.

After they flee from Area 13, your next stop is Area 15. Head along with West wall in this area until you find a cave system Venture inside to find the missing Tribe members.

Once you encounter the Grimalkyne, you’ll find out that it’s hungry. Just pull some Raw Meat from your inventory and hand it over. You’ll get a small cutscene that will end with the player getting the Plundeblade.

Be sure to speak to your Palico once you get back to the personal room in the Astera social hub. Change equipment to equip your new best friend.

With these tips and tricks in tow, any MHW player should be able to vastly improve their crafting output.