Vell will be making its first appearance this Sunday in Black Desert Online. Here is what you need to know to defeat it.

Every Sunday between 12:00 PM and 1:00 PM CET/PST (EU/NA servers respectively) the boss will appear in the Margoria, North of Lema Island. Remember that it takes time for Vell to actually reach the surface of the water. 30 minutes before Vell breaks free, there will be an alert message for all servers. That should give you enough time to get your group together and get into position.

An Epheria Sailboat or Epheria Frigate is absolutely required, as you have to go to the Ocean and damage Vell with ship cannons. In order to loot Vell, your party or platoon must get raid contribution scores. If you do not have an Epheria Sailboat/Frigate, you should be in a party or a platoon with someone who has a ship.

However, there are also ways to use rowboats and fishing boats. When one of your party/platoon member dies, you can help them get back to Vell’s Territory quickly using your rowboat or fishing boat. You can also use small boats when killing adds.

Vell spawns at Vell’s Territory, an area at north of Lema Island. Be aware that the mini-map will not show your location, as you’re on the ocean. To reach Vell’s Territory, leave from Lema or Tashu island and head straight north.

Vell will spawn in these 13 Servers:

When Vell is breaking free, the weather will turn cloudy and rain will fall, and another alert message will appear on all servers. About 10 minutes before Vell actually surfaces, there will be a giant whirlpool near where it will appear. This whirlpool can cause a lot of damage, so be cautious.

When Vell finally breaks free, it will be surrounded by rocky structures jutting out from the ocean in a rough circle. You’ll generally want to keep your distance from these. Being inside these areas when attacking Vell may deal more damage, but it makes you significantly more vulnerable to his AoEs.

Vell can only be damaged by cannons and matchlocks. There are also some adds “Lopters” around Vell that will attack player ships. These Lopters can be defeated with [Hunting] Matchlocks.  Do not sit stationary in your ship, Vell has several powerful attacks that he will use against stagnant targets. Just stay mobile, keep your distance and pay attention to his attack pattern and you should do fine.

Stocking up on food such as Hunter’s Salad that buffs Matchlock damage can be a blessing for this fight,

Vell will also use a rage-based ability when dropped below a certain HP threshold, he’ll create a small tsunami that can kill groups if they get hit by it. Be sure to dive under when you see him thrashing about as he’s about to trigger a wave.

If you manage to defeat Vell, you can loot your reward from his corpse. These rewards may include some of the new items: Vell’s Heart and Rainbow Coral Ring. 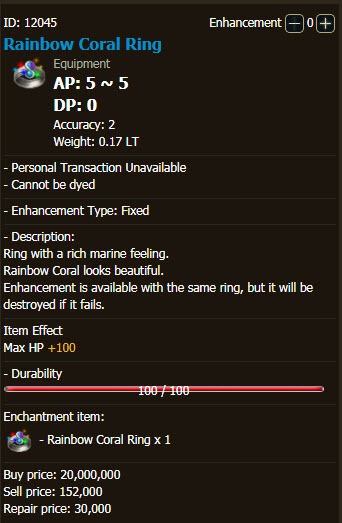 Other rewards are Black Stones, Hunter’s Seals, Cron Stones, Coral pieces, and Gold Bars (10G, 100G, and 1000G). Also, Vell’s Fine Powder, an item that can repair the durability of Vell’s Heart, will be dropped.