Disclosure: A free copy of the game was provided by the developers, @ConfluxGames.

An interesting combination of CCG and puzzle game is the order of the day in Triplicity. Instead of a typical CCG experience, progressing between one match and the next is an exercise meant to test both your ability to solve increasingly difficult puzzles, and your ability to think through tactical issues in a CCG environment.

So is Triplicity playing with a full deck, or is it half-shuffled? Let’s find out.

As a Unity game, it’s pretty simple at first glance. But you’d be a fool to not notice the real depth hidden beneath the surface.

There are two main gameplay loops here. In the first phase, you’re moving colored blocks around a simple grid to match them with their corresponding space. Complete a sequence of these puzzles and you’ll unlock the next duel in the chain.The puzzles get increasingly complex as the game starts chucking more colors and convoluted maps at you. 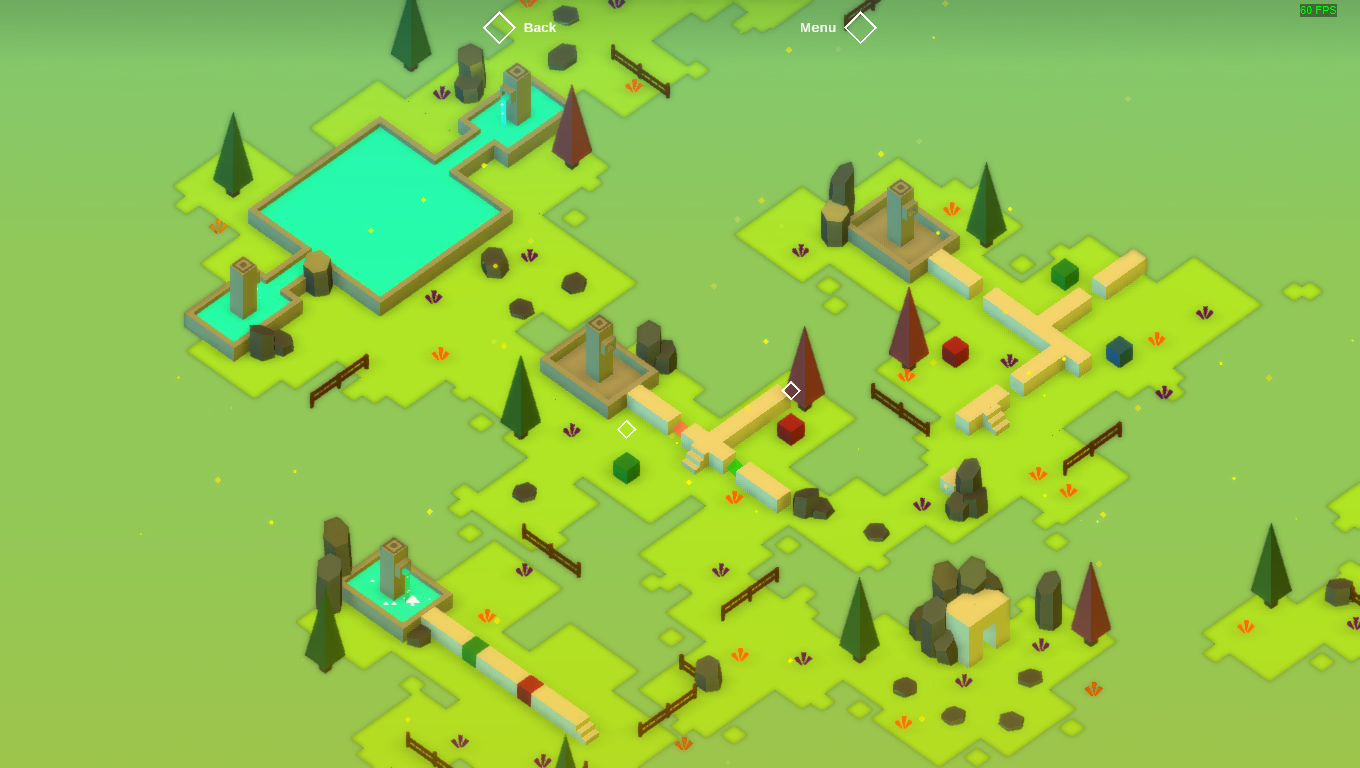 This is where the second main mechanic comes in. The duels in the CCG portion of Triplicity are built around very basic foundations, but with a surprisingly engaging outer layer of strategy.

You start each duel with 30 Life, and 3 Mana. Each turn your draw a hand of 3 cards and you can then spend your Mana playing cards on one of 3 spaces on your side of the field. Are you sensing the pattern between the name of the game and the mechanics yet?

The duels play out in a format very familiar to any player of games like Magic: The Gathering. Cards can usually only attack the space directly opposite them. Flying cards can attack any square though. The goal is to win a duel by reducing your opponent’s Life to 0.

With only 180 cards, you might think the game would be lacking in depth or strategy, but you’d be wrong. The inventive combinations with card abilities like Shield, Fireball and Freeze can make for some very interesting and sometimes tense moments during a match.

If you manage to win a duel, you get three random cards as a reward. These cards are usually in line with the difficulty of the duel you just won. So that means your deck will almost always be just about equal in terms of power with the next duel.

The visual style is pretty simplistic, but still charming. The same can be said for the puzzles. Moving colored blocks around is strangely compelling. The duelists are little diamonds, which I found cute. Don’t ask me why, I just do.

The difficulty curve is steep, but not insurmountably so. You’ll lose a few duels along the way, but over time you’ll build up more interesting and powerful decks that can overcome even the toughest challenger.

There’s also a practice and Tournament mode that focuses exclusively on the CCG side of things if puzzles aren’t your speed.

The deck editor is also well-done. The UI for that is just like the rest of the game, simple and easy to use. 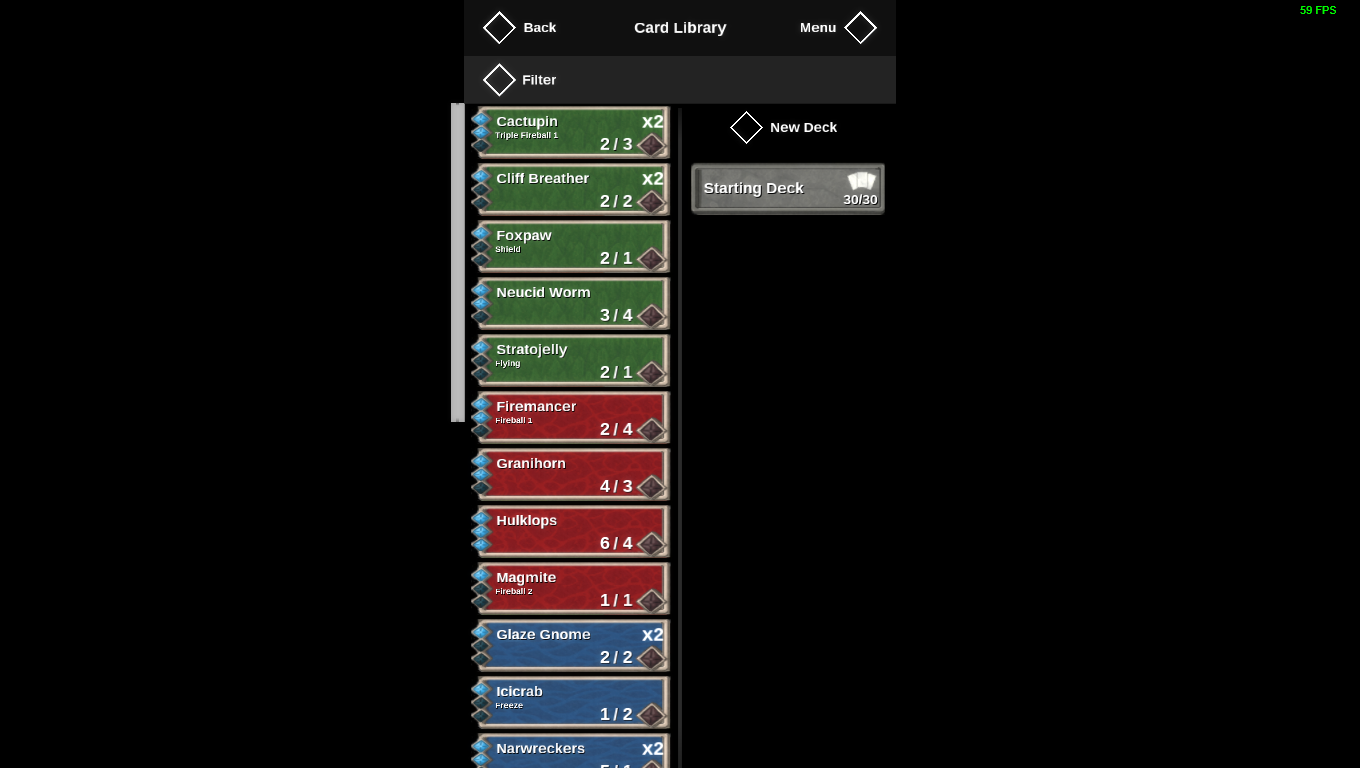 As it’s a basic Unity game, don’t expect too much in the graphics or sound department. The simple art and sound can actually be quite charming if you let yourself get drawn in. The animations are all smooth, and not surprisingly, the game performs well even on meager hardware.

Every aspect of the UI and the art is intuitive enough to understand at first glance, which is a great sign.

The mechanics are all very easy to understand and you’ll be dueling with the best of all the little diamonds in no time.

At $9.99 on Steam, there’s a decent amount of depth. There’s a 10% discount for the Steam launch as well, so you can’t really go wrong for $8.99. I’d recommend this to any CCG fan looking for a casual experience with a unique twist. Even if you’re not too into puzzle games, Triplicity is pretty easy to grasp, so it doesn’t feel overly daunting. Some might feel it’s a bit too expensive for a simple game, but you’ll probably get your money’s worth with a few hours of gameplay. Especially since you’re likely to enjoy those hours at least a little bit.

I was pleasantly surprised by this little game. I spent much more time than I needed to playing this simply because of how much it drew me in. If you find yourself looking for an enjoyable time-waster, or have some interest in either CCGs or puzzle games, you should probably pick this up.

Triplicity is a little hard to classify in some respects. An interesting CCG that draws some major influences from early MTG, with a huge dose of a puzzle game thrown in. That combination might seem strange, but after a few relaxing hours with the game, you'll be drawn in just like I was.

Everything performed well, and the major design components are all well crafted.Don't be fooled by the minimalist artstyle into thinking the game is boring. There's a surprising level of depth for a casual game like this. The UI echoes that same minimal art style, it's very intuitive despite it being little more than a basic set of shapes at its core.

As it's a very niche title, enjoyment will be very subjective. But I would definitely say you should pick it up if you have some interest in either genre that Triplicity falls into. The game definitely scores some points for originality and ease of use too.

Overall, Triplicity is an above-average game with a deceptively deep niche appeal.
7/10