As more and more alliances and coalitions jockey for position to be prepared for the looming specter of “Fozziesov”, a horde of expensive ships, including many supers, seem eager to explode.  First up, a large scale ~1000 pilot engagement in Stain.

The battle started over a Nulli Secunda POS in the system of NZG-LF.  As CFC and Stainwagon began to bring the POS down, it was quickly discovered that a large force of Nulli supers were vulnerable once the POS went down.  Acting quickly, the combined CFC/Stain forces bubbled the supers to trap them on grid. This led to a mad scramble to bring in Stainwagon Archons and Wyverns to hit the supers off field, or at least try to.

Their plans were quickly ruined by the appearance of Nulli T3s and a PL TFI fleet.  Both of which began working on clearing Hictors and allowing the Aeons and Nyxs to apply DPS.  In the end, Nulli made it out losing no supers but a sizable number of subcaps.  While the CFC and Stainwagon pilots lost a Wyvern, 5 Archons, and a slew of subcaps.  Battle Report

To continue the current spate of recent super-capital losses we have yet another Nyx to go on top off the scrap heap.

On the 28th of March a Nyx class super-carrier piloted by TARIKAS CANARIOS of Northern Associates. [NA.] alliance joins his fellow alliance mate robbie syke’s who lost his Nyx less than 48 hours earlier. 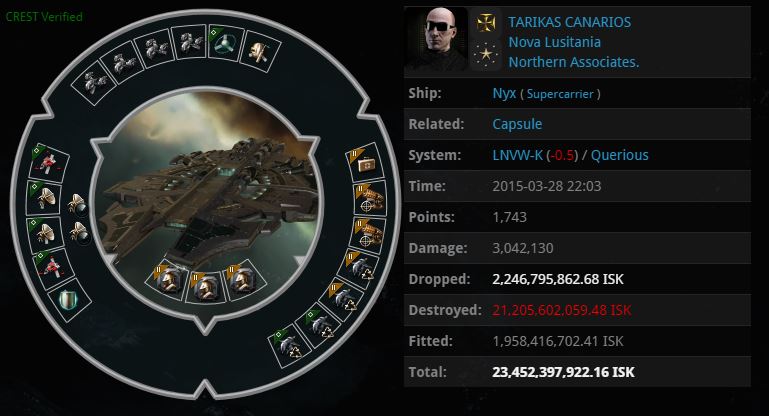 The circumstances of this seem to be jaded somewhat by a discrepancy between standings according to each party. Prior to this even EON Alliance [EON] had apparently had blue standings with [NA.] but according to a comment on the killmail by a Voll Horst “Eon was neutral/red over 1 hour before the nyx die! So if the guys can’t reset standings or dont relog….” However, in response to this these alliance mails found on Eve Skunk show that they apparently saw them as blues still, although there can be no true confirmation either way.

The often-publicized HERO deployment to Sakht has been mostly completed.  HERO members are still in a general state of disorder after some of the more noteworthy things that have happened this week.  But they seem to be doing alright.  Even to the point where leadership stated in their recent CNM meeting that yet-unknown groups have already approached them about hiring them for upcoming fights.  It remains to be seen how this will all play out.

Black Legion. also took a knock on the chin today.  Engaging in sporadic fighting with Snuffed Out in Abune.  The Black Legion. forces became aware that their movements were being watched and that members of the Low-Sec entity Snuffed Out [B B C] were looking to get the drop on them and maybe score a valuable kill.  In the subsequent fighting, over 100 Billion ISK was destroyed between both sides.  Including the loss of a BL Nyx.

In our final blurb today, even the long-standing group Provibloc got in on the action.  Brawling with [NULL]., a group who has long stood in opposition to Provi.  Today, a capital strike force fielded by Provi executed a hit-and-run attack on a [NULL] Avatar, accompanied by two Aeons and a Nyx Mothership.  The trap of a Provi Hictor waiting cloaked off a supercap bait fleet worked perfectly, allowing Provi and various gangs to destroy one of the Aeons and the Avatar-class Titan.

Nice write up. Im really interested to see how delve pans out, I’m loathe to admit it but I think the CFC are going to be best poised to take advantage of fozziesov when it hits.