Starship Corporation is a game all about one thing, building spaceships. The game has been in Early Access on Steam since 2016, and it’s finally hitting it’s full release on May 3, 2018. So after all of that time, how does the final product stack up? Let’s find out!

In Starship Corporation, you aren’t the head of a sprawling intergalactic empire, you’re just one of many companies in a massive capitalist economy vying to supply multiple organizations with the ships to fuel their own ambitions. It’s a unique twist in a genre laden with multiple versions of what are essentially the same game.

As far as game modes, there’s a campaign as well as a sandbox mode that’s basically just a limitless campaign. The game does include a very well-done tutorial that makes learning the absolute basics of Starship Corporation a breeze.

You can take contracts from the open market, or build ships for your company fleet. And as you would expect, each ship needs to fit to certain criteria. If the contract client needs a freighter with minimum crew comfort and amenities, that’s what your blueprint should contain. It’s this core gameplay loop of designing ships according the market conditions that makes up the bulk of the initial challenge in Starship Corporation. There’s a lot of complexity in the game and it’s all built into the various mini-games the player will undertake as you try to make their company profitable. 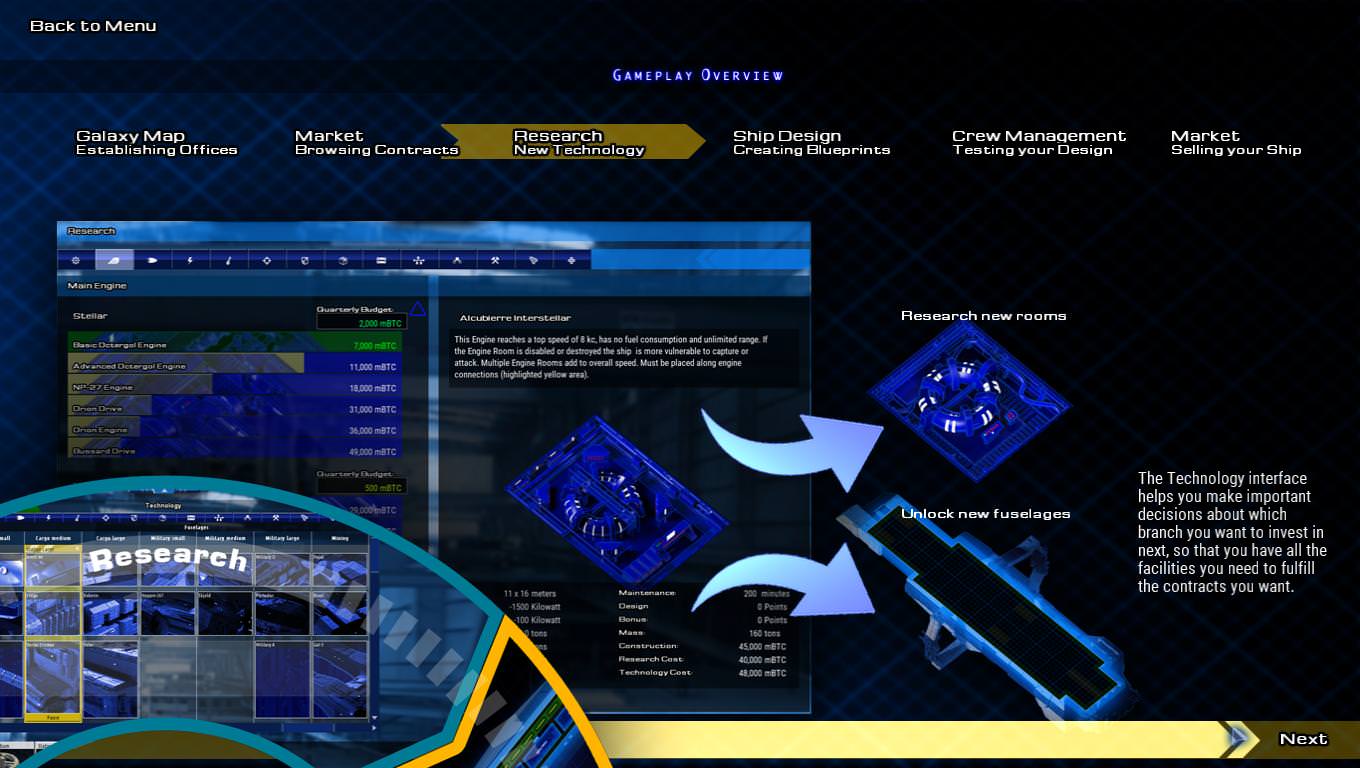 And when it comes to making money for your company, there are two main ways to make that happen. Once you have a completed design saved as a Ship Class you can choose whether to deliver it to a contract client or to send it out into the galaxy earning mBTC through random events and encounters. These encounters fall into basic categories of mining, military and research.

Now you might be wondering what you can spend that mBTC on, well mainly it goes towards research and the cost of building ships. You have to dump money and resources into all of your ship hulls and components, so picking the right research priorities is vital to success in the early game. Picking the wrong techs or layouts in the early game can sink your company.

So once you have your first few technologies picked out and researched, you move on to the building phase. It’s at this point where the depth of the game comes in.

Remember all that depth I mentioned in the previous section? Well, the majority of it comes from the part of the game that comes after you build your ship blueprint. Once you finish planning your ship layout, it will be transferred to the mission simulator

HEP (Hostile Encounter Program), ERS (Emergency Response Strategies), and SOP (Standard Operating Procedures) are the three primary parameters that are being tested in these simulations. Each of these represents a snapshot of the capabilities of your ship in various roles. Each contract you take will have a certain minimum rating in each of these categories that correlates with the best reward. It’s the management of contract requirements alongside and efficient use of resources and money that’s the real challenge in Starship Corporation.

The mission sim is genuinely the most fun and variable part of Starship Corporation. Assuming you can get through the other tedious aspects and find a stride, you could have a lot of fun. Dealing with all the different disasters could work as a game on its own.

As a core concept, the balance seems OK. The early game is a bit rough if you’ve never played before though. You can definitely make the game slightly easier by specializing though. For example, start with a narrow selection of ship hulls and designs, then retool those basic designs for specific roles. I decided to specialize on industrial and mining craft as my primary money-spinner in the early game.

The other major aspects of the game outside of the simulations and ship planning is all about managing your intergalactic empire. Moving ships around the galaxy map is fairly easy and the management is actually pretty simple. The most complex part of the game here is planning out your research. 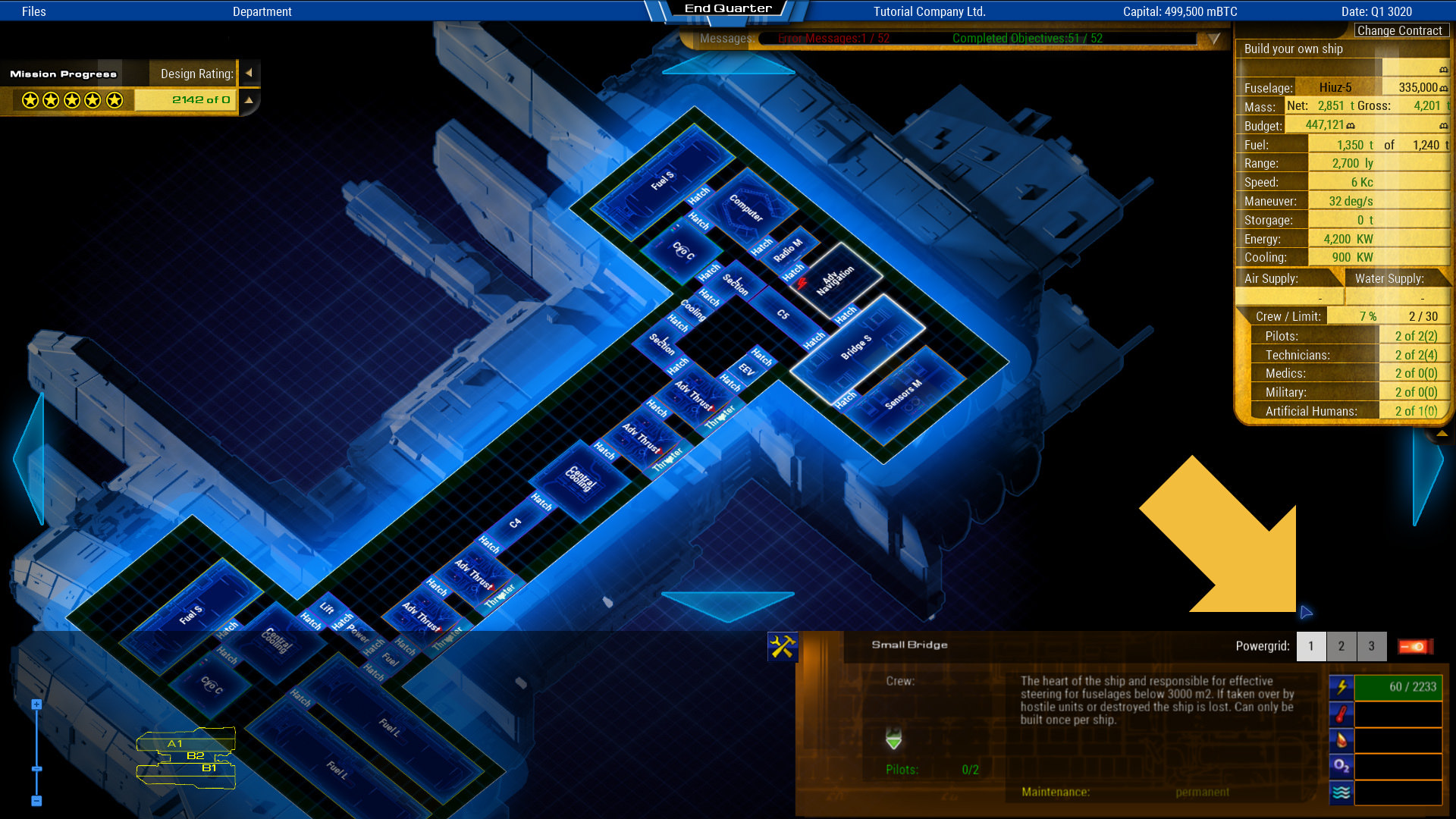 The building UI is my first major hangup in terms of overall design and usability for Starship Corporation. The UI for planning blueprints is a bit too cluttered, and sometimes UI bugs make navigating module types a bit annoying. The designing of ships is difficult to get a handle on as a newbie, but it’s something you’ll learn and get more efficient at with time. Although the fact that ship designs are saved and become usable across any savefile is actually quite helpful for cutting down tedium on repeat playthroughs.

There are other issues with general UX that I found annoying as well. Having to dig through menus in the ship planner is a bit slow, and the information presented to the player in this phase is sometimes unhelpful because it’s so vague. Sometimes you’ll have to simply manually check every deck on your ship for that missing power connection to satisfy a missing requirement, that’s pretty tedious.

These kinds of issues are all over the place, and on their own are not game-breaking, but it’s those tiny extra bits of tedium that just seem to compound in Starship Corporation. There are things that are helpful though. Like when checking a contract, the contract will explicitly tell you what parts you don’t have researched. It’s these kinds of conflicting execution that reflect an intent to polish the experience, but overall polish feels like a task that the devs seem to have failed to fully complete. 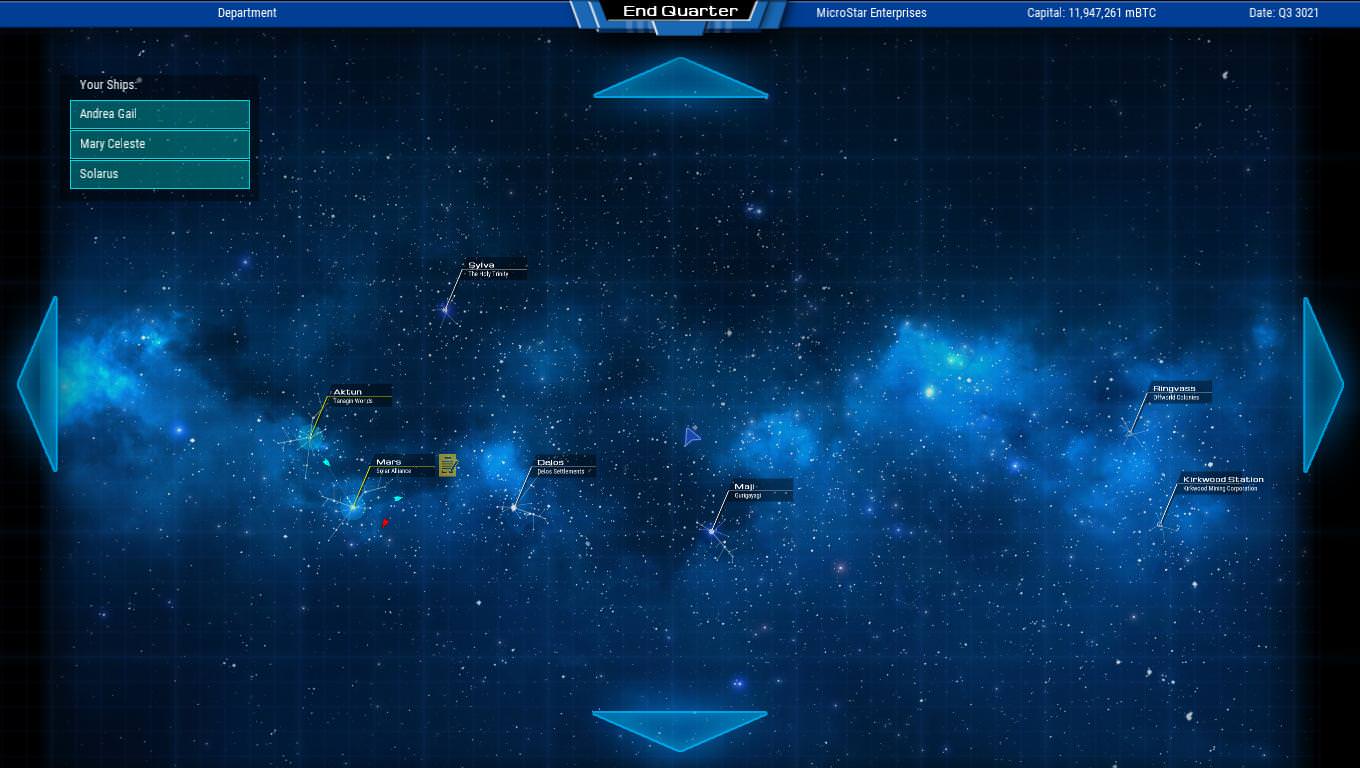 There are lots of issues that I experienced during my playtime. A handful of crashes or hangs of the application were quite annoying as I lost out on some progress. And there’s the irritating load times, this isn’t a graphically demanding game at all, but it can still take up to 10 minutes to boot.

All of this is made even worse when perusing the Steam forum looking for solutions to the issues I was having and seeing lots of complaints about how buggy the game is. This is not a good sign.

I also noticed a handful other non-intrusive bugs like tutorial voice-overs that looped incorrectly or text for star system names that broke outside the bounds of the UI box it was meant to inhabit. There’s lots of these little quirks in the game, but hopefully at least some of them will be fixed soon. In terms of usability, the UI is OK, there are some minor issues with diagnosing problems in the build menus, but those can be overcome with experience.

It doesn’t help the total experience that Starship Corporation feels like it’s trying to be two different games. Overall, the design and testing phase of your ships is the best part of the game, and it leaves the management and economics part of it lagging behind.

As a  $20 game, there’s enough things wrong that make it somewhat difficult to recommend that people pick this up at full price. This isn’t to knock the core game design or its implementation, but rather a reflection of the poor and buggy state of the gameplay itself. After 2+ years of work, a full release should be more polished and refined than this. At the end of the day, Starship Corporation is a great game idea that’s been flouted by a combination of bugs and tedium.

While the concept is fun, especially for someone like me who has a particular fondness for industrial-focused space sims, there’s a lot of problems with this game that seriously hurt the overall experience. It’s challenging, sometimes too much so as there are some balance issues. But these pale in comparison to the deeper issues with usability that seem omnipresent.

Overall, despite some pretty big missteps in UX and gameplay intuitiveness, there’s a fun and long-lasting game in Starship Corporation. The biggest issue is the combination of tedium and bugs that undermine the fun sections like missions and economics.