A supercarrier belonging to an alt of one of EVE’s more prolific players, TinkerHell. has been destroyed today in the system of Vey in Placid.  TinkerHell is regarded as one of the game’s richest players and is well known as someone who hotdrops other supers using his Revenant. 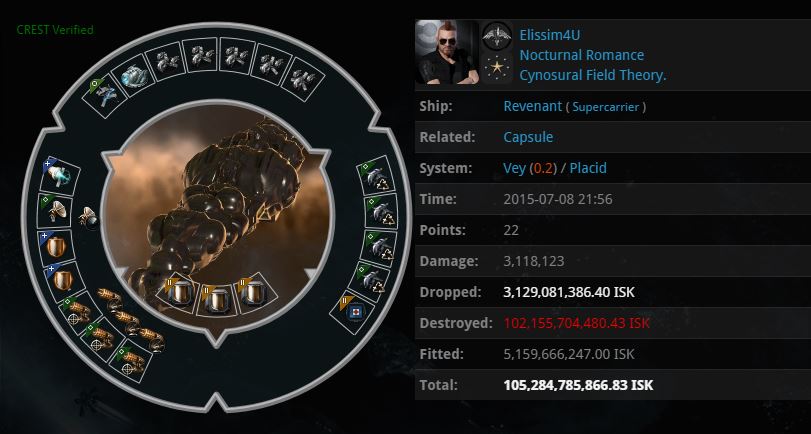 The super was brought into the system to kill an Erebus Titan that had been found in the area. It turns out that the Titan was actually bait arranged by Snuffed Out to draw in supers trying to fish for kills.

As soon as the Revenant landed on grid, a previously unknown Purifier decloaked and lit a cyno. Through said cyno came a force of more than 50 Subcaps with Heavy Interdictor support. The super dies shortly thereafter.

We received intel on a cloaked Erebus in Vey. We moved a cyno and bridged in HICs, decloaked the Erebus, brought in some battleships and TinkerHell’s Revenant.

It turned out that the Erebus was bait. A Purifier with a cyno decloaked as soon as the Revenant jumped in, and a fleet of Snuff Box subcaps with HICs followed.

The Revenant managed to warp out, but it was caught as soon as it landed. The pilot’s client crashed as soon as he landed, but there was nothing he could’ve done at that point anyway. Snuff supers soon entered system to finish him off.

Congrats on the kill, that was really good bait.