Rockstar has announced that Red Dead Redemption 2 will be getting three special edition releases, including a massive Collector’s Box that doesn’t include the game, because that’s a thing that games do nowadays.

This $100 box of tat that doesn’t include the $60 game does include the following “collector’s items”: Metal tithing lockbox inspired by the Van der Linde gang, collectable challenge coin, double-sided poster, six shooter bandana, treasure map, pin set, playing cards, Wheeler, Rawson and Co. Catalogue, and 12 cigarette cards. So if you wanted to massively overpay for some themed Red Dead Redemption 2 stuff, here’s your chance. Alternatively, just wait until people try to dump the junk on Ebay a few weeks after release for much cheaper.

Next is the Red Dead Redemption 2 Ultimate Edition. This adds a world map plus a range of online bonus goodies, such as the blackrose bounty hunter outfit, copperhead enforcer outfit, black chesnut thoroughbred, free access to the survivor camp theme, free access to additional weapons, and rank bonuses. This version all includes all of the content from the lower editions. This version includes the game, and also costs $100.

All versions of Red Dead Redemption 2 include pre-order bonuses, which include the War Horse and Outlaw Survival Kit in-game items, and a ‘Cash Bonus’ for Story Mode if you pre-order the game digitally. Anyone who pre-orders the game from the Xbox Store or PlayStation Store before July 31st, 2018 will get the “Treasure Map” in-game item. A bonus item that makes it easier for the player to hunt down in-game wealth. 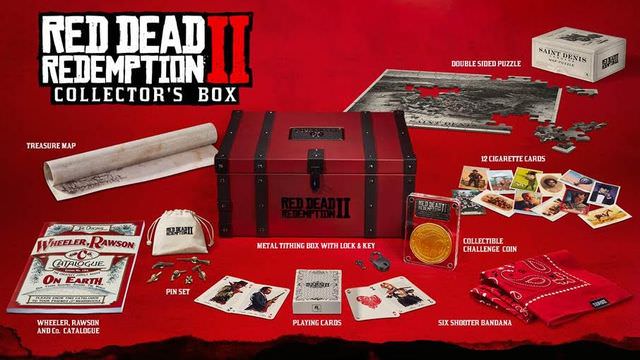 So in other words, Take Two stripped content from the base game to encourage pre-orders, as is the usual tactic with AAA gaming these days. Who wants to bet this content gets sold as DLC later on?

All digital pre-orders of Red Dead Redemption 2 from the Xbox Store and PlayStation Store include a bonus bunch of GTA Online cash that will be immediately added to your Maze Bank account.

Here’s the official blurb from Rockstar for adding this bonus cash to your GTA Online account once you’ve pre-ordered Red Dead Redemption 2.

Let’s be honest, I’m sort of dreading the possible future that this game will get inundated with micro-transactions for in-game items and cash, much like GTA V, and that they will poison the game experience. The game will have these micro-transactions because Take Two made too much money from GTA Online not to include them. It’s just a question of how much they affect overall gameplay and balance. By the way, Take Two doesn’t think loot boxes are gambling, so there’s some legitimate concern with these kinds of things in their games.

Red Dead Redemption 2 is due for release on PlayStation 4 and Xbox One on October 26.