Niantic is currently going all-out on the in-game events for Pokemon Go over the summer. And fans are noticeably excited, so excited that they’ve revved up the speculation machine and started to wonder what if/when Shiny versions of Eevee evolutions will land in the mobile ARG. One particular group of users are sharing an image, which can be seen below, that speculates on which variants may show up in the game. Check it out. 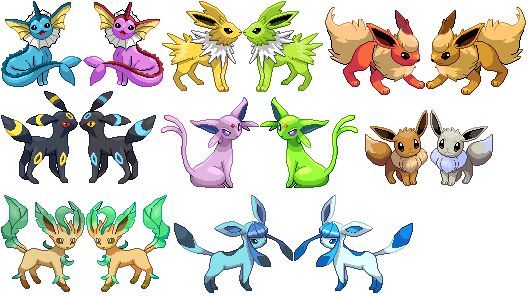 And since Pokemon Go players have been scarily good at predicting what additions and updates land in their favorite game, I’d bank on this being at least somewhat accurate if I were a betting man. We’ll probably find out in the next few weeks exactly what will get added in the Eevee Community Day event, and what special requirements need to be satisfied for captures, so stay tuned.

But it’s not just Shiny evolutions that has people excited. Pokemon Go Fest is also running this week, and some really interesting exclusive content. And at the very least, it’s not the festival of sorrow like the first event in Chicago. Some things are better, like the game actually works this time. Although there are reports that food lines were incredibly long. So it seems like the typical issues faced by a relatively new event with a huge number of people attending.

But regardless of logistical issues, there’s a pretty good reason for fans to endure the problems. Pokemon Go Fest attendees this year get the chance to catch Celebi, but it ain’t as easy as it sounds. For those curious as to how Pokemon Go Fest attendees will catch Celebi, or anyone who wants an idea of what to expect from the quest, here are all the steps and objectives:

No seriously, that’s the real requirements for this thing. At this point, it’s unclear when Celebi will be available to everyone, but fans shouldn’t have to wait too much longer.

Players can also catch new Pokemon like Torkoal, as well as a whole host of Shiny variants that appear to have their spawn rates boosted at the event. So if you’re in Chicago, get out there and catch some new Pokes.