This is it, it’s time for the new Challenge League in Path of Exile. This time, POE will pull a Lara Croft, but unlike the Incursion League which cowered in the ruins above ground, we’re going much deeper beneath the surface in the Delve League.

Delve League introduces a hybrid version of previous gameplay and Challenge League mechanics with a journey into the Infinite Azurite Mines.

This mine is the first endless dungeon for Path of Exile, and it’s possible to reach levels that are far beyond even the toughest maps in the Atlas. Behind this expansion is a simple question, can you survive the dark?

Left untouched for over 250 years, the Azurite Mine has been consumed by a malevolent darkness that cast out the Eternal Empire. Niko, an inventor, has harnessed the power of Voltaxic Sulphite to create a machine called the Crawler that can pierce the darkness. Delve into the mine but don’t leave the Crawler’s light for long or you’ll be crushed by the darkness. The Azurite Mine is full of treasures for those brave enough to risk the darkness for short periods of time. Use flares to venture farther away from the Crawler’s path, and dynamite to destroy unstable walls which conceal even greater rewards.

Your goal with delving deeply and greedily is to guide a special mining machine called the Crawler to certain resource zones on different levels. The Crawler constantly attracts enemies you see, and it’s your job to beat back the endless hordes of darkspawn beasts and reach your goal.

By the way, that goal is buried deep underground, and the labyrinthine maze of ruined and decrepit halls is going to be tough to traverse. Helpfully Grinding Gear Games are adding a new map system to POE to manage that. You can check out a preview of what it will look like down below. 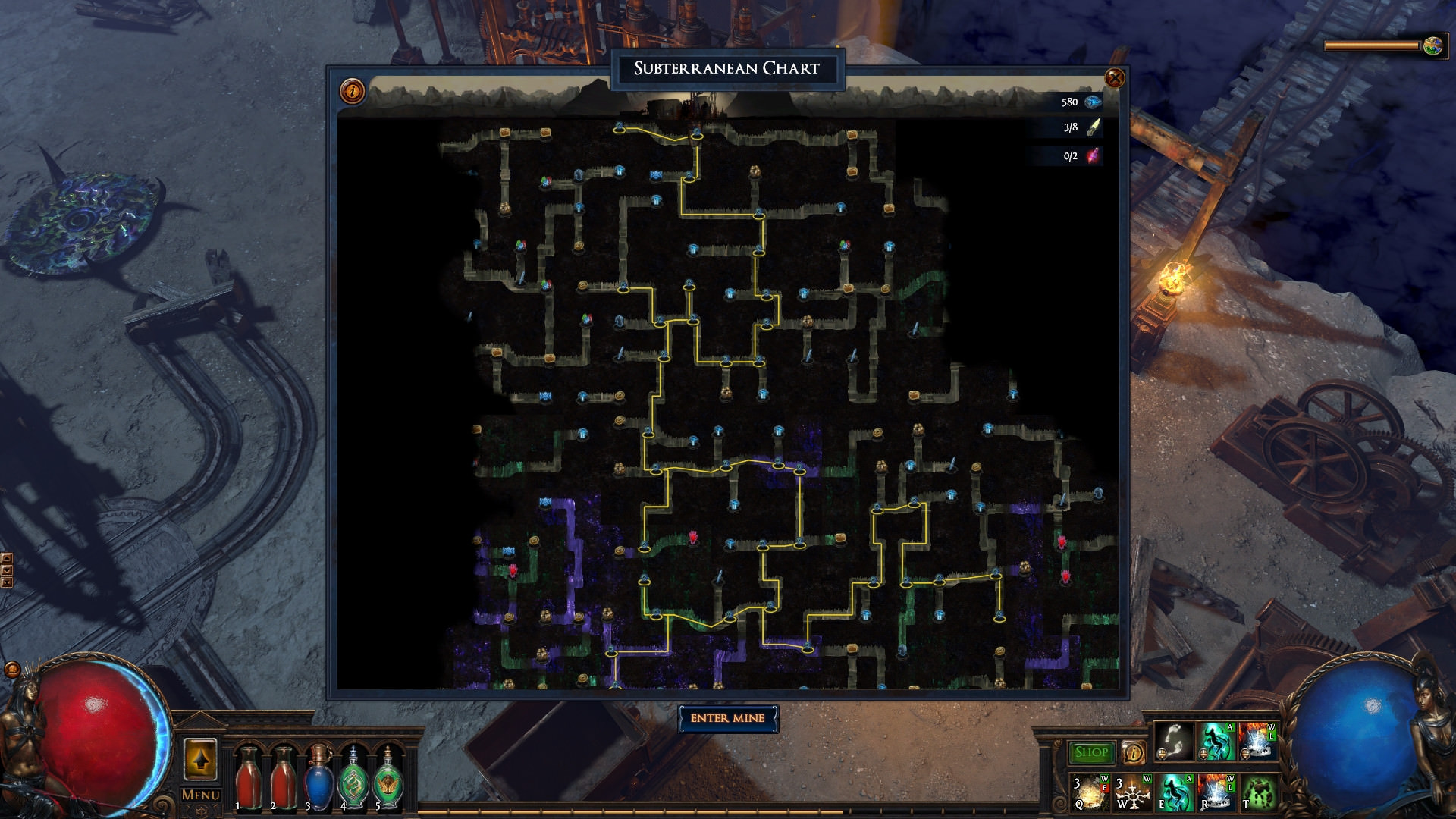 What is that goal you ask?

Well aside from grabbing loot, which the Crawler helpfully hoovers up for you, you’re looking for two sets of items in particular. Timeworn Reliquaries and Alchemical Resonators specifically.

The Timeworn Reliquaries are special keys first appeared in the Legacy league, and can be exchanged for a single random unique item. These are essentially the new version of Uniques for Delve League. Although these Delve items won’t have Legacy rolls. So no +1000 Life Kaom’s Heart for you.

Also in the mines are Alchemical Resonators, which are special socketed crafting items. By filling them with Fossils also found in the mines, you can use them to craft some ultra-powerful gear. Maybe even some unique mod rolls will be thrown into the mix as well. We’ll have to wait to find out. The Fossils can help limit mod pool rolls, so if you want to block Physical Damage rolls, you can do that with this new system.

All in all, this could turn out to be an interesting way for POE to address the constant power creep problem without having to nerf every build into the ground. As of next month, there will be a new endless dungeon that will eventually decimate the most overpowered builds if you venture deep enough into the depths. In fact, that’s actually what the goal is. GGG want to know what the most OP builds are, so they built a League specifically to challenge players into finding them.

If you’re a brand new POE player, be sure to check out our various builds and guides for the best action-RPG on the market.

The Delve Challenge League launches into Path of Exile as part of the 3.4 patch, on August 31, 2018. Keep your eyes glued here for more Path of Exile news as we get closer to that date. And rest assured, we’ll have a beginner’s guide to help you through the dark after the League lands. Until then, tide yourself over by watching the trailer for the 50th time like me.

Special treat for those of you that came down here. Lucky boy ZiggyD managed to snag some world-exclusive gameplay footage from a recent deal with GGG. It’s pretty cool to see the new League mechanics in action, check it out below. There’s a lot more depth and complexity to Delve League than other Challenge Leagues, so we’ll need all the help we can get to prepare.

How to get perks in Call of Duty: Warzone

System Shock Remake gets a final demo and new teaser

Providence Bloc Loses Another Skirmish Over the D-GTMI System