As March closes out, EVE Online and is having it’s own form of March Madness.

First up we have HERO coalition. Who have now largely completed their deployment to the Delve/Fountain conflict and are currently poised to engage in upcoming timers in the constellation of NJU-QV.  The upcoming fights are marked as offensive timers so it seems that HERO will be playing a third party role in the fights,  The effectiveness and outcome of these engagements however, is still up in the air.

It’s no secret that HERO has issues.  Their chosen strategy of trying to keep the HED-GP pipe in Catch open for the stragglers and those few staying behind, while simultaneously dividing their forces in Sakht is a questionable one to me.  They have sufficient numbers to stand a chance, but the real question lies in the effectiveness of their doctrine choices.  The scope of which is further limited by the relative inexperience of their newer pilots; which also hold back the speed at which they could transition from their reliance on Ewar, to a more effective Assault Frigate doctrine.  Sure, Ewar can be great, but the skills required only carry a new player so far.  These doctrines are also hilariously easy to counter with raw DPS.  Especially considering that new pilots have a very hard time keeping frigates with little to no tank alive in a pitched battle.

HERO has restructured part of it’s Jump Bridge network to focus it’s forces in Catch, but how much this will help cannot be known.  The idea of holding Catch is further complicated by the recent departure of Arik Alabel  from the position of MilDir.  He has been replaced by Anna Niedostepny.  Whose welcome email echoed leadership sentiment on current plans from the last few weeks.  It’s entirely possible that such a transition could cause some lag time in adjustment as Anna takes over.

On another note, often relating to HERO, is the discussion of Fozziesov.  I’ve seen many people espouse the idea that such changes will make BNI/HERO a more formidable entity to contend with.  I take issue with this idea to a degree.  Will HERO be in a better position?  Possibly.  With the importance of grid control over a constellation being more reliant on numbers rather than super/cap grinding, HERO may be able to leverage their numbers into gains.  But again I come back to the same underlying issues with their doctrine and experience.  SOV changes won’t make frigates easier to keep alive, nor will it make ECM more useful.  If anything, there may be more focus on keeping these force multipliers off-grid by their enemies.  So I don’t think sheer numbers will do what those people say they will.

But enough about that lovable groups of newbs.  Now on to some dank super and capital kills.

A skirmish between the group Dead Terrorists and Gate Camp Theory broke out, resulting in a Nyx kill.  The  Nyx was killed, this time in the lowsec system of Thelan in the Sinq Liason region after apparently being baited and then counter dropped in a successful trap. This is the 9th Nyx to be destroyed in the month of March.  It was successfully destroyed by Dead Terrorists [IKILU] and Knights of the Posing Meat [FETID] who provided the bait with friends Already Disbanded [AD] working alongside both of them. 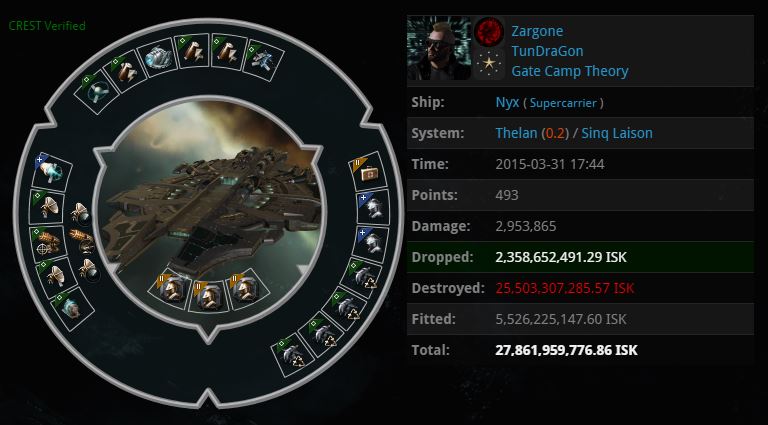 In a much less dramatic, but more impressive development over the weekend, Black Legion. destroyed a large number of Dreadnaught capital ships.  The move was explained by BL as being a purely economic one.  As the extreme difficulty of moving these capital assets from Venal to the Delve conflict zone in Aridia was deemed to be too great to warrant risking the losses that would have been incurred.

BL pilots opted to mass suicide Billions of ISK worth of assets rather than move them, citing deals with N3 renters to replace them inside the deployment zone at a discounted price.  The move puts little strain on the alliance or the line members.  As mass self-destruction of insured unfit hulls pays out ~2.5 Billion ISK.  The difference between replacement of the new hulls and insurance payouts is being covered by leadership.  Only incurring a few Billion ISK in overall negative losses for the alliance.  In total it’s estimated that ~40 dreads were destroyed.

Now, on the topic of the escalating war in Delve.  It remains to be seen what will happen as more groups dogpile into the region.  I’d assume that without further support, N3 will be locked into a two-front war with CFC and the Russian alliances basing out of Insmother.  There are whispers that N3 will reach out to various groups in the area including Pandmic Legion, TEST, and the Geminate Coalition to help either act as diplomatic envoys, or if needed be the iron heel to crush any attempts at usurping valuable moons and assets.  Then again, Russian alliances have a history of being unpredictable, so they could pull a fast one a gobble up more SOV before N3 or it’s allies can respond.

The overall current tone of speculation is that the mass build up of supers after the B-R battle from the Halloween war may culminate in one final sendoff super brawl for Dominion sov.  Whether this will come to fruition is unknown, but I certainly hope so.  Because seeing the clock reset so to speak on the massive balls of supers just before Fozziesov would be a great way for the playerbase to shake off the stagnation.

Temtem is basically as close as we're getting to MMO Pokémon