Waking the Tiger is out, and the changes it brings are many and complex. The aim of this expansion was to add depth, especially to the war in Asia during WW II between Japan and China. This area of HOI IV has always been a little lax in terms of depth, and Paradox wanted to fix that.

So what have they changed, and does it make the game better or worse? Let’s find out!

The core design philosophy for Waking the Tiger extends beyond revamping the war in Asia. Of course, new National Focuses for various nations is the most obvious change in this regard. But there’s something much more interesting beneath the surface.

The National Focus trees have been changed for Japan and it’s puppets, many of the various Chinese factions, and some major powers like Germany and the British Raj. Each of these new Focus Trees allows for a single idea within HOI IV to be more engaging and interesting. That idea is player choice. These new focus trees offer alternate historical paths such as restoring the German Empire by opposing Hitler, or creating Socialist state in Japan and joining with the Soviet Union in an alliance against Fascism.

It’s clear that every aspect of Waking the Tiger‘s design is influenced by the goal of increasing the variety of decisions, and strategic blunders, the player can make. There’s a lot of new content and flavor added in this DLC and it makes for a surprising fun experience for even the most experienced HOI IV player.

I made the decision in my first game to play as Communist China, and was pleasantly surprised by the branches of the tree and the choice they offered. Being able to develop different political characteristics and military options is a core component of agency in HOI IV, and it’s great to see that applied to the Asian powers. Taking a peek at the other new trees shows much of the for other nations.

Another new feature revolves around the Command Power system. This expansion to the Army EXP system allows the player to assign specific traits to Generals and Field Marshals. Players can also organize a more robust chain of command by placing their combined armies under different Field Marshals to pass more combat bonuses to their troops.

But even before I got into the game, I noticed another new change as well. Expanded difficulty modes. Newly added Civilian and Elite difficulty modes add more choice for new and experienced players alike. And according to Paradox, almost 40% of players start of Recruit, with a smaller percentage moving up in difficulty as they spend more time in the game. This change will likely serve to increase player longevity in Hearts of Iron IV. 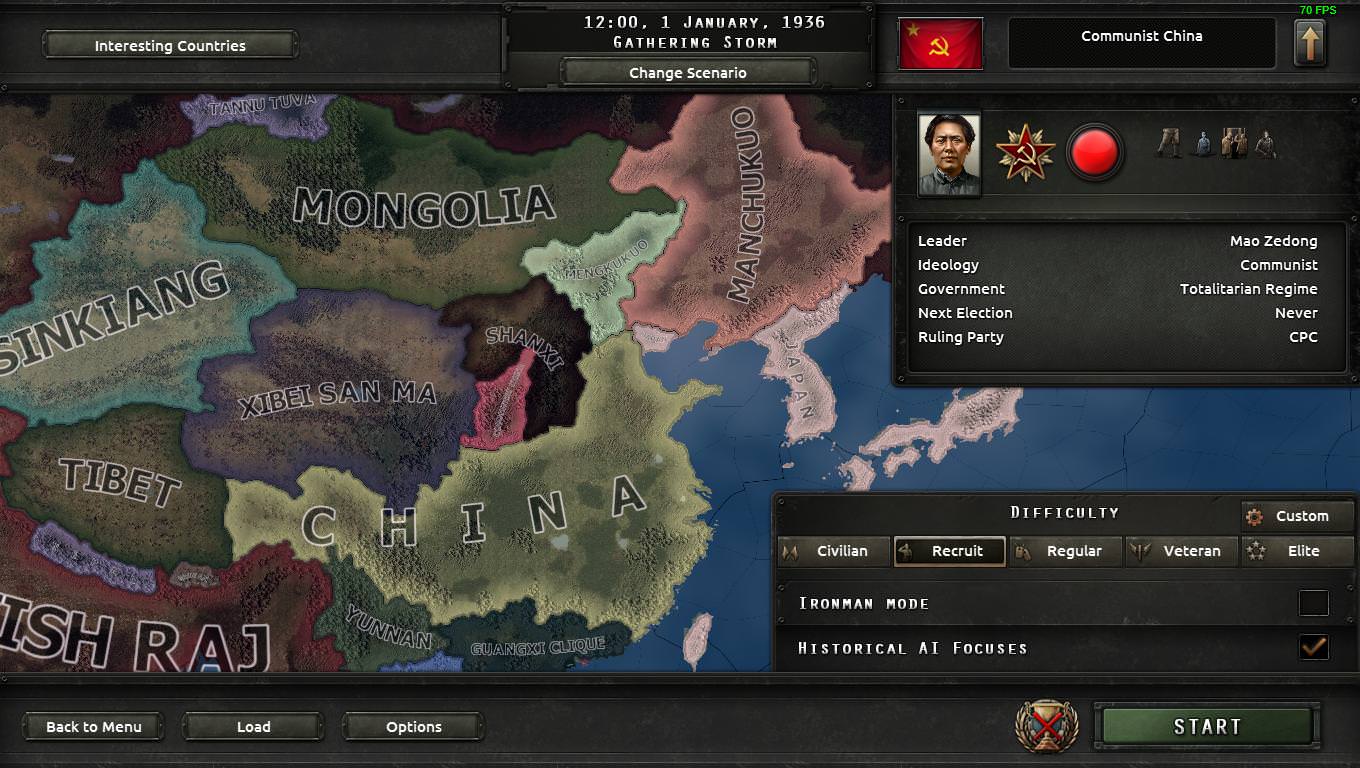 Although it must be said that most of these new features are not unique to Waking the Tiger, but are instead part of the 1.5 update to Hearts of Iron IV. If this was a review of the 1.5 update, I’d be much more inclined to like it, but we’re supposed to be focusing on the DLC here.

There are a lot of minor and major changes in this DLC. From a tech tree with unique tech icons, to new unit icons, there’s a lot of little improvements in immersion that make the game that much better.

Aside from cosmetic upgrades, there’s a lot of quality of life changes in the DLC that just make me want to play HOI IV more. For example, a simple change to the factory interface that makes it so you can scale the UI to 5x or 10x the factories in a single UI cell makes it so much easier to manage large production lines. No more having to set up multiple Infantry Equipment lines.

Improvements to managing equipment like Consolidation are also nice, especially if you’re playing with lots of divisions and need to save on equipment. 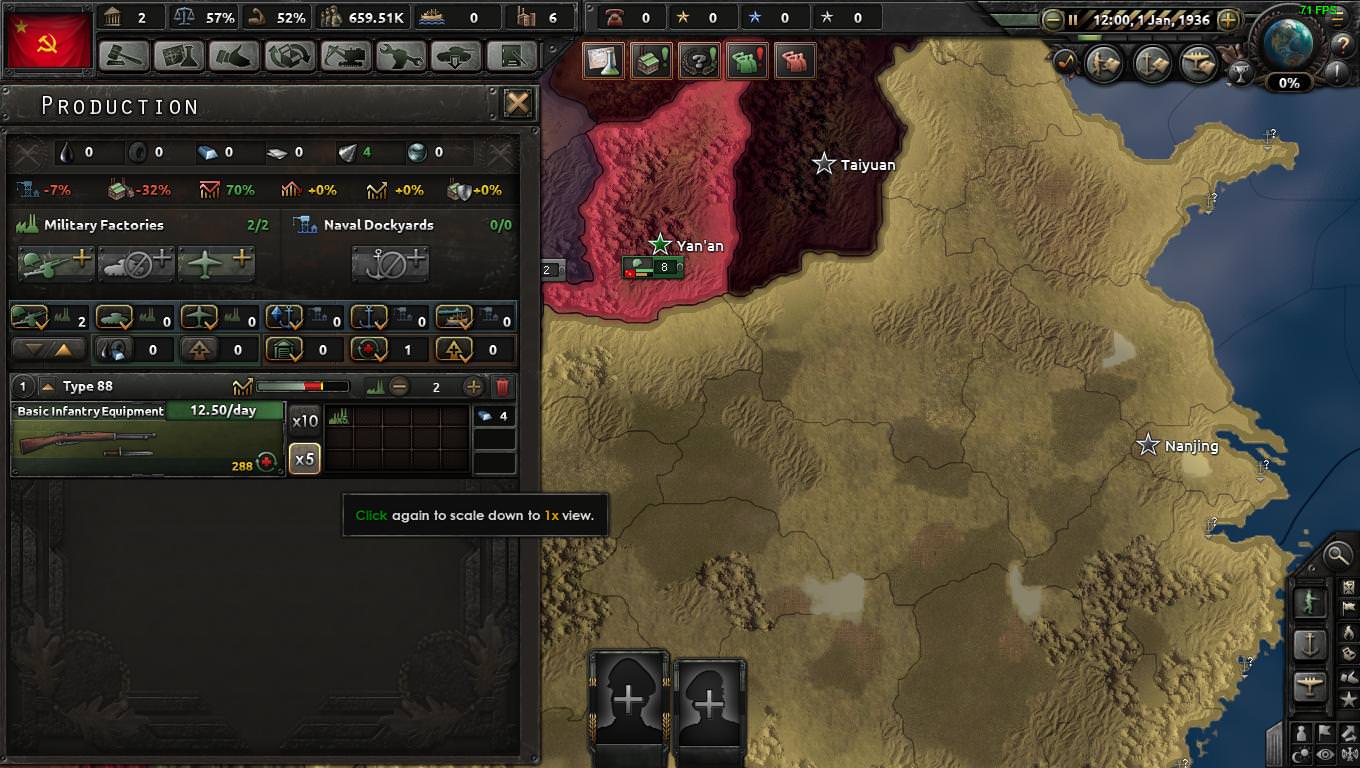 My biggest complaint with Waking the Tiger is that as a standalone expansion it might seem somewhat threadbare. But there’s a surprising amount of depth to the expansion itself. Sure, many of the new features like the UI changes and the Decision tree are free. But Waking the Tiger includes tons of unique Decisions such as decisions simulating historical events, the choice to form unique nations like the Roman Empire, and even some decisions that simulate political rivalries with more depth than before.

There are some other neat little ideas like troops acclimatizing to the weather that are cool of Paradox to include, but don’t add all that much to the gameplay. Some of these other additions include, new sounds and voice-overs, new achievements, and new 3D models for some units and more.

Let’s be fair here, as an expansion to the Asian front of WW II, Waking the Tiger excels at what it wants to do. But it does feel a little weak as a package for the price. Just like in our Stellaris: Apocalypse review, the DLC feels like there’s a lot going on, but if you strip away 1.5.0, it’s a bit less impressive as an update.

I did have a lot of fun with the games I player overall, but the sticker price was a bit of a concern.

As usual for these kinds of releases, not much has changed in terms of performance that’s incredibly noticeable at first. At speed 5, there’s still some slowdown due to calculations in the background, but this is unavoidable with Paradox games as far as I can tell.

I didn’t encounter any crashes or major slowdown during my time with Waking the Tiger, so that’s good. HOI IV has always been a solid game, so no real surprises here.

At $19.99 USD, there’s a lot of content here. A massive expansion of the political and military aspects of Hearts of Iron IV to such a degree that it completely changes the character of the game is worth it to me. A newer player to HOI IV may want to skip out on it unless they’re really keen on getting the full experience of the war in Asia.

If you’re not that big of a fan of HOI IV, I would say to wait for a sale before picking it up.

As someone who has spent nearly 200 hours in Hearts of Iron IV, Waking the Tiger will definitely keep me playing even more. It is paradoxically both disappointing and encouraging that the devs are packing in so much content into the free 1.5.0 update, but that takes away from the usefulness of Waking the Tiger just a bit considering the $20 price.

If you want a free copy of Waking the Tiger, check out our giveaway. The more people that join in, the more codes we give away!

With a whole slew of new systems in play, Waking the Tiger certainly adds depth to HOI IV. One of the more noticeable mechanics changes is the increased granularity of politics. Instead of Political Power controlling national decisions. You now also have to juggle Command Points, War Support and Stability. Each of these new systems ties into an expanded economic and political simulation meant to add more depth and realism where previously the game was a bit one-dimensional. If Paradox wanted more depth, they certainly achieved that much

As a standalone product though, Waking the Tiger both succeeds and fails. It wins points when it comes to adding depth to a previously lacking aspect of HOI IV, but loses them again for being a bit lackluster for the sticker price.

I might recommend it to the hardcore Paradox fan who wants more depth. But for a new player, I would genuinely say they should spend time with the 1.5.0 base game first before picking up any DLC. So enjoyment and value are going to be pretty subjective here. I'll rate them based on my personal opinion as a huge fan of Paradox games.

All of this isn't to say that Waking the Tiger is bad, quite the opposite in fact. It's just coming across as a bit confused as Paradox have pushed major new features into a free update, and then even more features into a paid DLC.