GameStop is launching a rental program – for PowerUp Rewards Members

Over the last couple of days, a lot of stories have ran over rumors about a GameStop rental program in gaming media, it turns out these rumors weren’t false. 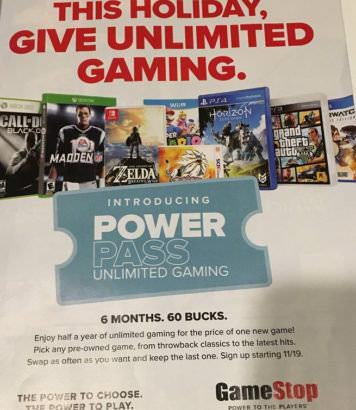 PowerPass will be a part of GameStop‘s holiday strategy, and as such, can be purchased as a gift. For $60, gamers can enjoy “unlimited gaming” for six months, with customers able to select any used title they wish, including retro games. At the end of the six month period, subscribers can choose one game to keep.

Staring November 19th, members in GameStop’s PowerUp Rewards program – which functions like many other discount and rewards programs – are allowed to enroll in a special rental program for used games.

PowerUp Rewards has three tiers (two of which carry an annual fee) that come with their own set of perks for GameStop customers, including discounts on games as well as a subscription to Game Informer magazine.

Now this rental program might sound strange to some people considering that games retailers like GameStop have been slowly downsizing, GameStop themselves closed 150 stores over the last year.

All things considered, it looks as though the PowerPass rental program from GameStop is a great deal for budget-oriented gamers. It gives them unlimited access to as many games as they want within the six month period, and could very well convince many to stick with physical media over digital games.

The real draw here is that this program will be roughly 33% cheaper than the nearest competitor, GameFly. As a GameFly member, you can rent as many games as you want and play them as long as you want for $22.95 per month for 2 games at a time, or $15.95 per month for 1 game at a time. At $10 a month, the GameStop program will be a tempting draw for those who don’t mind sacrificing the convenience of games being shipped to their homes.


Whether or not the program will help GameStop shore up sagging physical sales in their previously dominant used games division is a mystery, but this diversification looks like it could be a good move to slow down the juggernaut that is digital-only gaming. Especially as GameStop looks to focus more in other areas like collectibles and tech. So Funko Pops and GameStop-branded gaming accessories will be more plentiful – yay?