It’s been fifteen years since EVE Online was released, and it’s still going strong even today. And this week marks the 15th FanFest celebration hosted by developers CCP in Reykjavík, Iceland.

There’s a lot of exciting news coming out of Iceland this year for both new and veteran players. And even if you’re not excited by the announced updates to the game, the overall theme of enjoying EVE Online for the massive social experience and space opera that it is is plenty exciting on it’s own.

So let’s dig in shall we?

EVE has grown a lot over the last decade-and-a-half, and it’s built some amazing experience and interactions over the years. The Opening Ceremony is all about shaping and telling those stories through EVE Online.

Watch the EVE Fanfest 2018 Opening Ceremony and take a nostalgic look back at 15 years of EVE Online with CCP Guard, BjornBee and CEO Hilmar Veigar Pétursson. There is also news about EVE: War of Ascension, the new EVE mobile game, and the latest updates on Project Nova.

It’s a great feeling to hear these wonderful stories of how people have fallen in love with the game, and how it relates to the future of the game.

If you’re interested in getting into EVE Online, consider checking out the trial offer for some free ISK.

Shifting gears from the Opening Ceremony, let’s talk about the real meat and potatoes of Fanfest, future updates to EVE.

The big focus this year is on the Into The Abyss expansion coming to EVE sometime soon.

The biggest planned addition with this update is the Abyssal Depths Deadspace content. This new system relies on a special series of instanced PvE “rooms” that players can complete for special loot. These new areas of space are home to a previously unknown race of humans called the Triglavian Collective. These are the same mysterious ships that have been found fighting Drifter forces across New Eden over the last few weeks.

If one were to enter these new zones, you can expect to duke it out with three new ship classes. A frigate known as a Demavik, a cruiser, the Vedmak and a battleship, the Leshak are waiting to blow you out of the sky. How will they do that you ask? Well. with a new class of weapon called an Entropic Disintegrator. This very powerful weapon deals a mix of thermal and explosive damage, but it has one major weakness, it has no falloff range. So if a player manages to stay outside the optimal range, the enemy ship can’t fire. Although kiting these ships will not be easy.

Be wary thought that the Triglavian ships aren’t the only danger you’ll encounter in the Abyssal Depths. The rooms have a limited boundary, and flying outside of it will damage and ultimately destroy your ship. The rooms also contain various modifiers, these can either be helpful or a hindrance. Their localized to the area that the bubble covers, so focus on identifying bad ones and stay away from them.

One of the major rewards for completing these rooms is that it unlocks a special item that allows a player to “mutate” their module stats. This can be either good or bad depending on RNG. The outcome can leave a player with a much more powerful variant of the starting item if the mutation comes out in their favor.

Another new event that’s being added is the Operation: Conscious Interruption event chain. This in-game PvE event will see capsuleers taking part in pitched battles against Drifter forces who are attempting to fight back against the Triglavian Collective. Players will earn rewards based on their participation in this event.

It’s not just new ships and PvE content either. The Abyss expansions also includes a much-needed revamp to Planetary Interaction to make it less cumbersome. Players will also gain access to new cosmetic items as well to coincide the release of these new in-game events.

Check out the full Keynote below:

The other major presentations at Fanfest 2018 center on what CCP is changing with player-owned and NPC structures, as well as what changes are being made to how modules and ships work.

The biggest new addition announced is the mutaplasmid tech that’s being introduced with the Into The Abyss expansion. These new techs will allow players to reroll the module stats on a given item. Think of it like a Divine Orb in Path of Exile. And as one would expect, the rolls can be better or worse than the starting stats. CCP have also made it clear that the upper limits on the rolls will be designed to be not too upsetting to the current meta-game. CCP Fozzie also made it clear that the RNG will skew towards the negative, possibly to incentivize the appeal of trying to beat the odds. 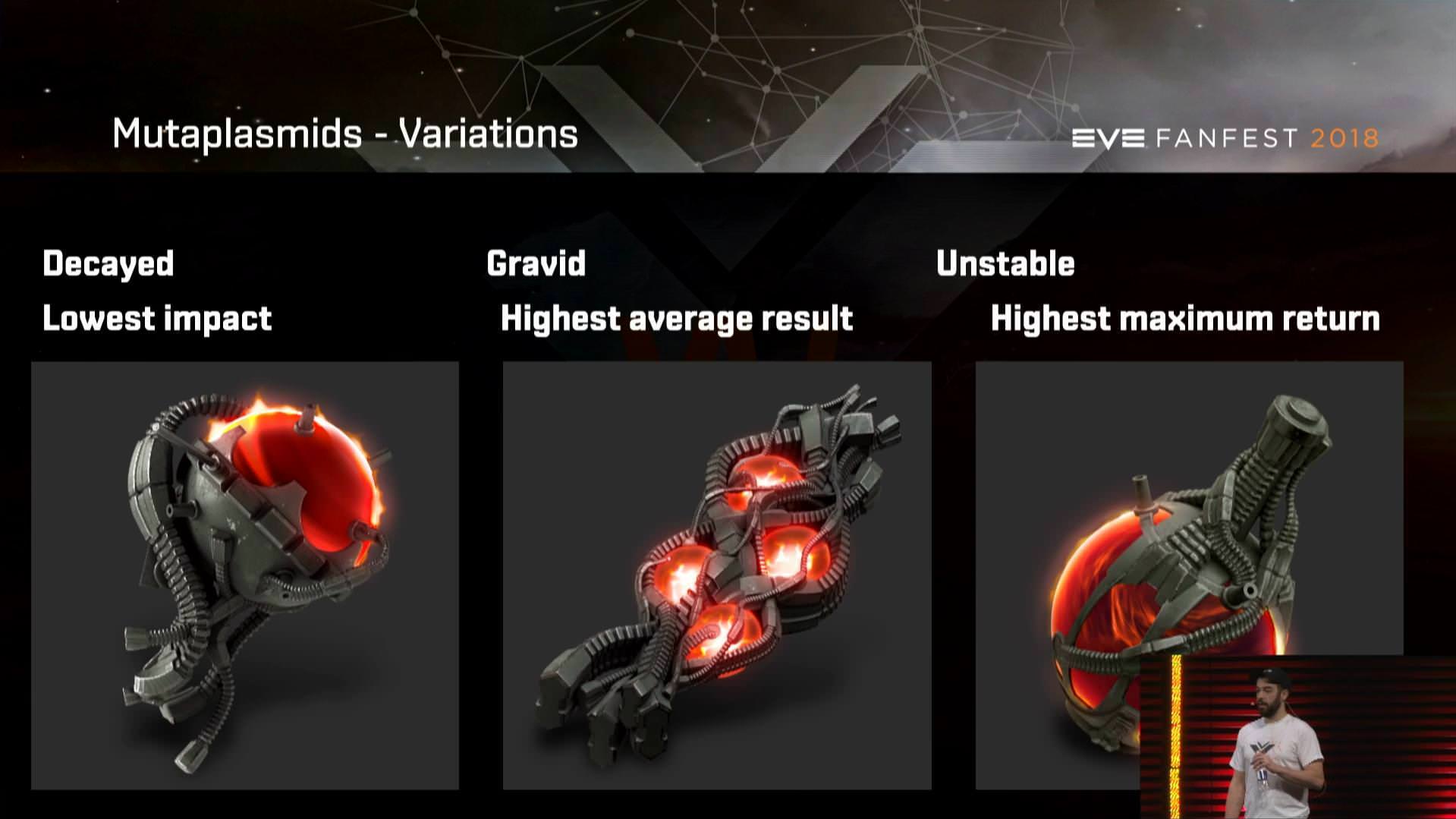 There will also be trade restrictions on these mutated modules. Mutated modules will only be tradable via the contract system. The mutaplasmids themselves can be traded normally.

Another announcement concerns the introduction of the Triglavian Collective ships and their Entropic Disintegrator weapons. These one-per-ship weapons have no falloff as we discussed previously, but they also apply damage in a unique way. The Entropic Disintegrators apply damage over time at a constant rate. The ratio of damage delivered allows these new craft to hit resist holes for any type of tank. The ratios probably won’t be too meta-destroying, but will still force other player to adapt.

One of the other major points here is that POS and NPC structures will finally be removed. On June 5 of this year, all conquerable stations and permanent outposts will be replaced by faction fortizars. There will be five different variations: one for each of the factions, and a generic one that will replace conquerable stations.

There’s also two new structures headed to New Eden in the coming months. One platform for propaganda and advertising that will essentially be player-owned billboards. These new modules will function as flags that allow players to show off as well.

Full details will follow in a devblog in the near future, and CCP anticipates public testing to come in the near future. CCP are fully committed to making structures and sovereignty even more appealing over the coming months by expanding and refining existing feature sets, so stay tuned.

If you want to check out the full Fanfest 2018 playlist, find it below:

Is Gear Tactics coming to the Xbox game pass?