Another day, another POE build for Path of Exile 3.3, this time it’s all about a build so good that it can even be run as a Solo Self-Found (SSF) build. Say hello to Dual Vaal Reave. This is a fast-moving, very high clearspeed build that wants to keep Vaal Reave up as much as possible. The Reave skill can scale some massive AoE damage, and it is easily one of the best clearspeed builds I’ve ever played.

And even though the GG end-game gear can be expensive, even cheap gear with the right rolls can make this very strong nonetheless.

Life Leech and Mana Leech are vital to the survivability of this build. Don’t stack too much Mana Leech though, as Life is far better. A couple of Mana Leech rolls from Enchants/Mastercrafting is enough for most players. Because of the Attack Speed of the build, make sure to have ENOUGH MANA FOR 3 ATTACKS AFTER RESERVING, you will run out of mana too often if you don’t hit this minimum threshold.

Life Leech – Life Leech comes from Blood Rage & Atziri’s flask, with item rolls as a secondary stack. Always keep your blood rage up for the extra attack speed but when it falls off, pop Atziri as a backup.

IMPORTANT! – If you are having trouble leeching and feel like you don’t leech enough vs bosses( especially Guardians and Shaper) then it’s because you don’t do enough damage to them or have low leech investment. In this case you should buy jewellery with extra life leech, improve your damage and come back later again or just add some leech nodes.

Intelligence – Only pick up nodes for this if you can’t get rolls on items.

Gain X% of Physical Damage as Extra Element Damage – This is what pushes our damage completely overboard and is borderline broken. Stacking this with physical damage is our primary goal.

Critical Multiplier – Your second most important DPS stat to hunt for.

Critical Strike Chance – On a weapon, it’s a lot bigger increase than Critical Multiplier anywhere. On anything else, it’s barely worth investing in.

Attack Speed – Second most important stat Worth stacking, makes you generate stacks / effects even faster which after 0.1 APS is already sort of irrelevant but also improves your whirling blades speed a lot!

Physical Damage – Our most important DPS stat! I always make sure my amulet and rings have it.

Block & Spell Block – A stat for madmen! Spell block is the best defensive stat in the game by far and makes boss fights a lot easier! 50% Block is already God mode. If you can, enchant your offhand with +5% block chance when dual wielding. I personally don’t want to play any melee anymore that doesn’t have spell block.

Frenzy, Endurance and Power Charges – We do not opt into these in passive tree as we can get close to same DPS from other sources. Reason being that we cannot generate these reliably during bosses and if we do, very rarely above 3, even with Writhing Jar.
Also having maximum of 3 Frenzy charges allows us to proc our ascendancy “10% more physical damage while at maximum Frenzy charges.” 3 Endurance charges reduces damage from hits by 10%.

Armor & Evasion – We don’t focus on armor but we don’t ignore it as well! Our passive tree including our average gear gives us usually around 70% phys reduction which is very strong! With a Basalt Flask of Iron Skin we can mostly achieve 90% reduction! Evasion is less important than armor but still gives us on average an extra 10% evade chance which becomes 60% with blind.


This build is a bit strange in that it requires switching around for better sustain in end-game mapping. Here’s an image that explains the process: 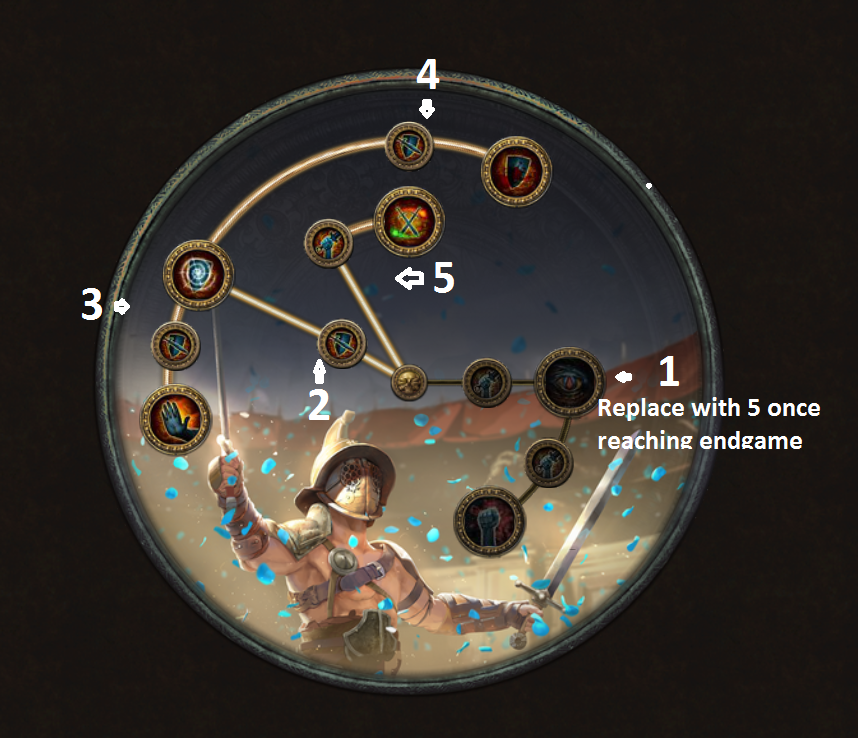 The leveling process is pretty simple, just clear mobs as fast as possible, while skipping unneeded quests. If you’re running this in SSF, it’s best to pick up quest rewards that you would normally skip like rare rings and such.

As far as leveling skills, Sunder is usually a good choice, but if you’re tired of that, just go Reave ASAP and focus on buffing damage. If you are a brand new Path of Exile player, feel free to check out our various POE guides for noobs.

You could use random unique shields instead of dual wielding and avoid taking dual wield nodes until you’ve reached Act 9. There are a lot of unique shields that have strong stats and make you die a lot less while leveling while barely losing any DPS. This will likely not be viable in SSF though as the chance of finding these shield is pretty low.

Tip: Click on the item to view it on PoE Wiki or to view similar rare items in poe.trade.

In this section you will find all the suggested items for this build. We always try to include optional gear in our listing, or try your own assuming you get similar stat rolls. Aim for high-quaity Rares if you’re replacing Uniques.


Physical Damage and Attack Speed are your main goals here for scaling DPS. Mods that add additional sockets like “Socketed skills are supported by X Damage” are a good optional addon too.

This is the slot for your stat-stick and a CWDT setup. Pretty straight forward. Stat sticks in SSF are always a bit tricky. Aim to plug any Resistance holes and to add elemental damage to your attacks for a start. Buffs to Crit Chance and Multiplier as well as Elemental Damage rolls are great too.

Loreweave since we’re focused on SSF, this is one possible route to a 6-Link. 60 Unique Rings need to be vendored in order to get it though, so get farming. Corrupted Uniques work for this recipe as well.

Failing that path, just aim for the standard Tri-Res and Life chest and get 6-links ASAP.

Abyss Belts with Life and Resistances are a good option for end-game. Other Rares might do in a pinch, but not having good rolls can make you a lot more squishy than is tolerable. Abyss Jewels are also a great source for damage buffs like these:

Attributes will need some help, so get a corrupted Amulet with as many stats as possible. Getting good Life rolls can help with survivability.

Since it’s SSF, Rare rings are most likely what you’re stuck with, so aim for the same basic set of rolls. Life, Resistances, and any increased damage that scales Reave.

You can swap the mods around if needed due to RNG.