Mirror classes and Command XP ranks are getting a pretty big buff in SWTOR. For the uninitiated, mirror classes are essentially the catch-all term for each factions equivalent classes. You’ll find an image the explains the basics below: 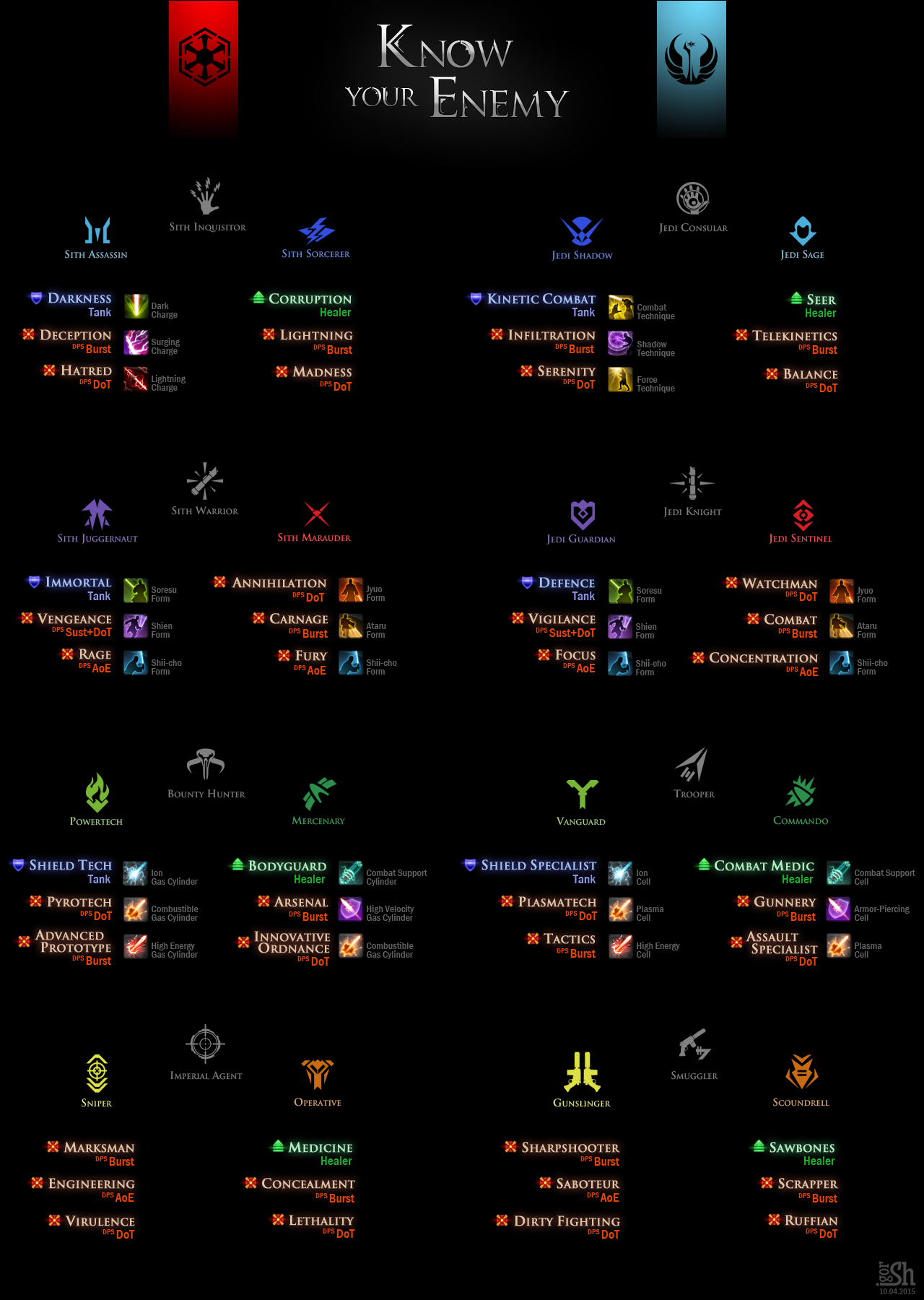 Bioware introduced the Command XP (CXP) ranks a few months back, as a secondary series of leveling paths. Each level gained of the 300 CXP ranks grants a special CXP reward crate. These crates are a great source of endgame gear and materials. They’ve also introduced the Legacy system. Which is  sort of family created from the characters on your account that allows them to share items and gear, as well as earn certain rewards as your Legacy improves.

You might thinks that’s a great system, and in some ways it is, but some players have found it to be a source of tedium and somewhat pointless.

Bioware have listened to the feedback on the CXP and the Legacy system and are working on incentivizing usage of these systems.

I verified with the team and the current implementation is intended, but I am seeing some confusion around the perk so let me explain how it works. Every time you hit Command Rank 300 on one of the mirrored base Classes (more on that in a sec) you get a 25% bonus to the base value for CXP gains. Since there are four sets of mirrors, you can gain four stacks of this buff, up to a total of 100%. It looks like this:

Separately, I know there are questions about how we communicated (or didn’t) around this perk and so let me explain what happened. When Keith put information on the perk in the roadmap, it was meant to be fairly general, but we realize if we had been more specific we could have saved some of this frustration. The requirements for the perk were born out of some technical limitations which prevented us from giving you a bonus for any character which hit 300 (such as multiple Sith Warriors). As I was gathering the notes for 5.5, I didn’t realize that limitation had been put in place and it wasn’t caught during internal review. None of this is meant as an excuse, you should have had this information before today and it should have been in the notes. I apologize for that not being communicated, that’s on me.

The above information has been added into the patch notes for clarity, we hope that you still get to enjoy the benefits of increased CXP as you rank up in Galactic Command.

What this all means is that the process of gaining CXP ranks for hardcore players is further streamlined by every character you get to max rank. The first run to rank 300 is still a grind, but it will be much easier as you play with multiple characters. Some more casual players might be annoyed by this, but Bioware are also working on class balance and other issues in SWTOR to make the initial grind easier.

How to get more ingots, leather and other resources in Assassin’s Creed Valhalla

Valve may introduce loyalty rewards in the future.

How to Equip Layered Armor in Monster Hunter Rise

How to get Wild Honey in Slime Rancher

Xbox One and Windows 10 gamers can now gift games

PCSX2 1.6.0 is out now with new fixes and code updates