There are singleplayer and multiplayer modes available, but since we’re running an early access press build, the multiplayer wasn’t online so we couldn’t test that out quite yet.

As for singleplayer, there are both campaign and custom battle modes. Custom battle allows you to pit two factions against each other and to fully pick their loadouts in terms of tanks. Although most of the bigger toys are locked behind the Prestige system. Which means you need to play games, solo or multiplayer, in order to unlock all the vehicles. There’s also quick battle mode that simply drops you into a randomly generated battle and cuts you loose. 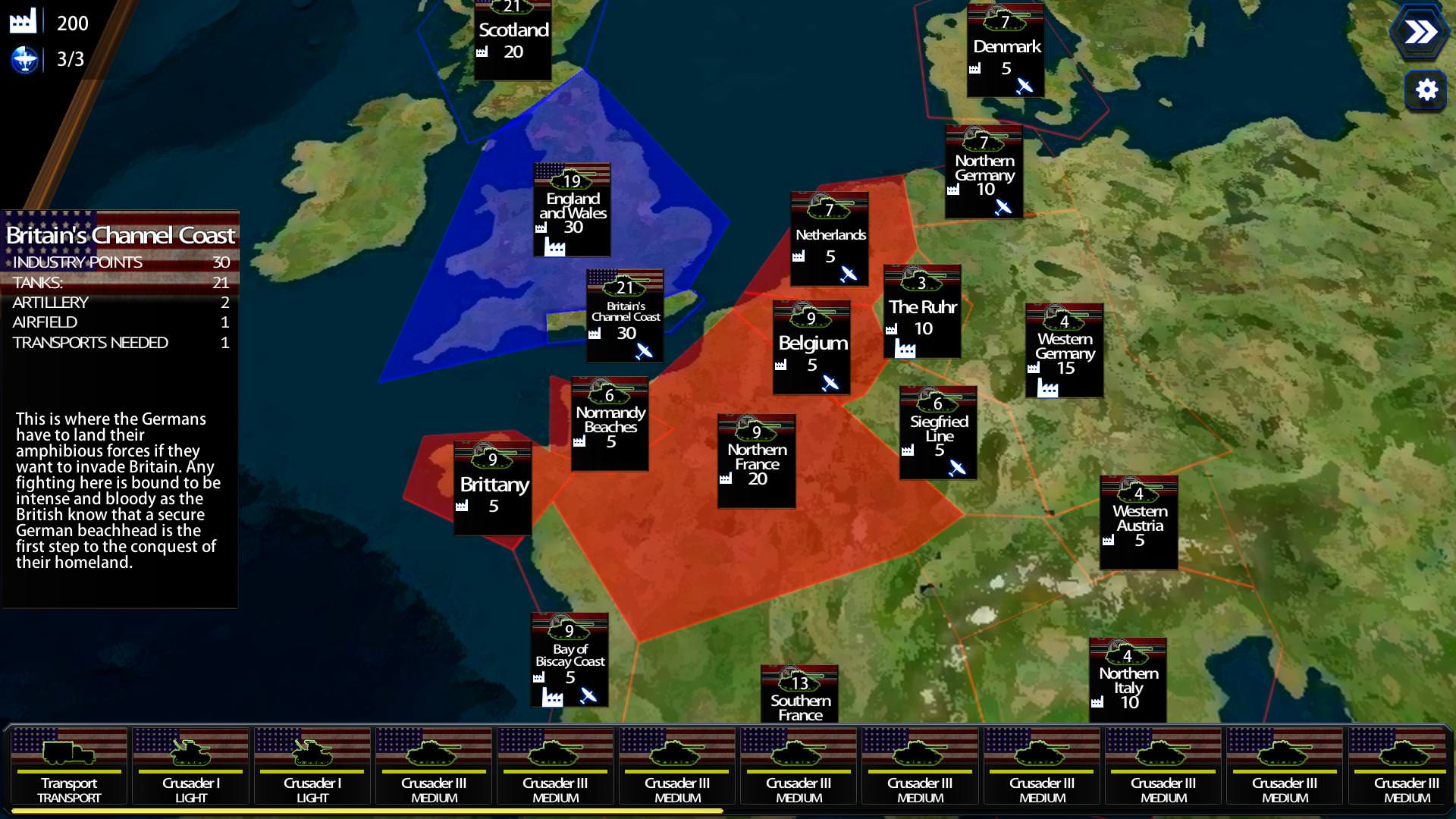 Being a turn-based strategy game about blowing up tanks in WW II, it’s pretty hard to mess the concept up. Battle Fleet Ground Assault has a lot of good things going for it, and some minor annoyances.

The Prestige system is an expected part of a game like this, Mythical City Games probably felt that there had to be something to work for. You can unlock new difficulties, tanks, powerup cards and other bonuses. Although since there are 100 levels to the system, and only a relatively small number of unlocks, most of the system feels like busy work.

The campaign is fairly straightforward, you pick a side and try to take control of Western Europe. When you start a campaign, you can choose either a pre-populated mode where you have an army already, or a blank slate mode where you can fully customize your forces from the outset.

Building tanks in the right areas in the right number is a huge part of achieving success in the campaign for Battle Fleet: Ground Assault. So plan how you spend your Industry Points carefully. Other than that consideration, there isn’t much strategy to the campaign as the AI is fairly passive, usually only attacking in a place where it has an obvious numerical advantage.

The levels are fairly sparse and generic, but there’s enough topography and features to allow any seasoned wargame player enough tactical decisions as to when and where to use cover. And that’s a bigger part of the game than you probably realize. Positioning and range is huge in tank battles. The name of the game is trying to gain line of sight on your enemy before they get it on you. And then you need to position yourself to take the most damaging shot.

There are a couple of annoyances that I don’t like though. For one, shell hit detection is spotty at times. Sometimes the shot just stops dead because it hit some piece of terrain that’s impossible to see due to the combination of low-res textures and poor topography modeling. Other times, shells blow through buildings, trees and fences without seemingly slowing down at all. Although I guess the devs had to make some concessions for difficulty. After all, they wouldn’t want to make the game too difficult for newcomers. The AI also tends to fudge its shots much more than it should so the player has an easier time of winning a battle. I personally find it a bit awkward when computer controlled tanks hit a shot from long range, and then miss an easy shot that should have been a hit next round. The AI will make pretty good use of cover though, usually to sneak behind your line for an easy kill. So at some points the game punishes you for mistakes, at others it lets you essentially cheat against the CPU. The kind of inconsistency turns me off.

READ MORE  How to farm Corinth Prime Relics in Warframe

There’s no escaping it, this game can be pretty hard if you go in completely blind. If you’ve never played a turn-based strategy game before, I strongly advise you to practice a few small scale games within custom battles to get used to the controls. Everything is very simple once you get the hang of it, but because the in-battle tutorials are a little lacking, it can be hard for new players to understand what’s happening.

The tutorials overall are actually kind of barebones, so Battle Fleet Ground Assault feels a lot like a learn by doing kind of game.

The mechanical depth is decent, but not really that engaging. Sure tanks have their own stats and you can deal localized damage to knock out tracks or ammo racks, but paying attention to good positioning, facing and concentrated fire can carry you through most battles. 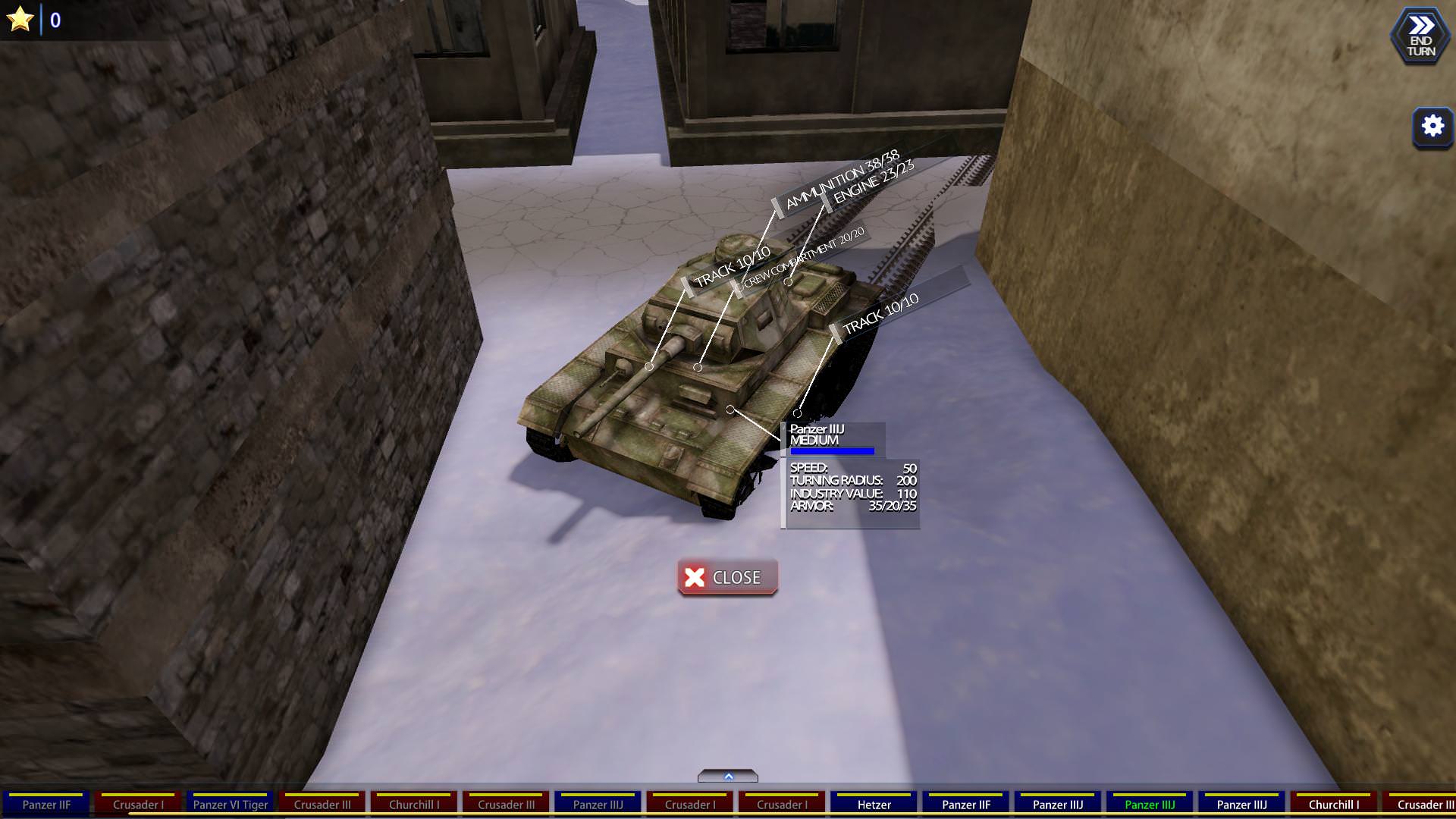 As long as take the time to learn that certain tanks will get wrecked if they take on something outside their weight class, so no light tanks should be taking on Heavy Panzers, you’ll do fine. There’s an additional layer of strategy to moving your tanks as a unit to provide concentrated fire, and you can even try to min-max your army setup so that all your tanks have a similar initiative order, but that’s not really necessary. And since the game takes care of a lot of the guesswork with aiming and positioning, at least on lower difficulties, there’s little challenge here for veterans of these kinds of games. On higher difficulties the AI is more accurate and it’s harder to range your shots, but it’s not a huge leap in difficulty.

Overall, I’d call this game a lighter version of complex games like Axis and Allies, or Company of Heroes. That’s not to say it’s bad, it’s just targeting more casual fans of the genre. 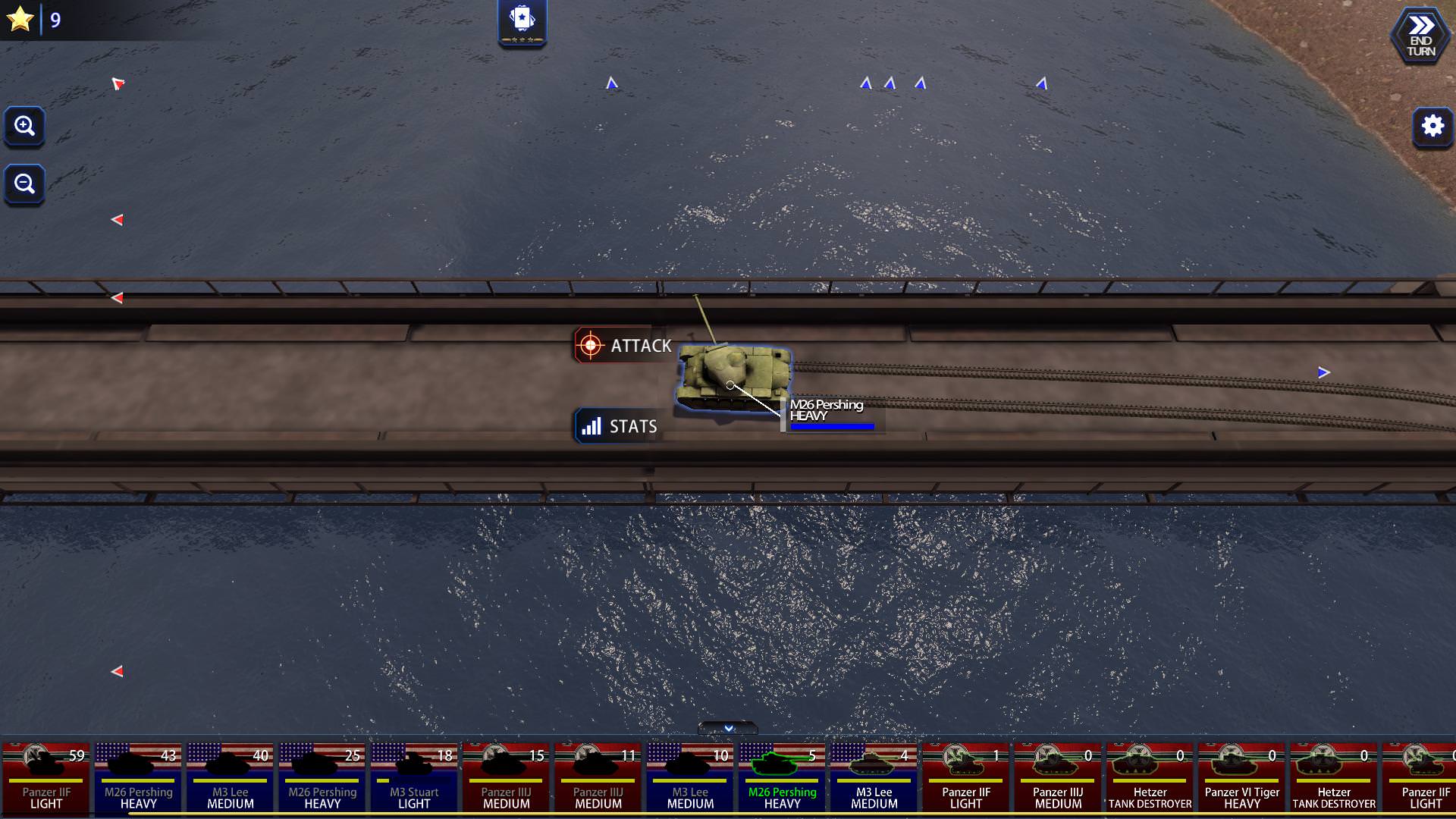 The visuals won’t be winning any awards, in fact they feel quite dated, but they still serve their purpose. Being that this is a title about blowing up tanks, Battle Fleet Ground Assault manages to do well enough with what resources it has. Terrain and buildings are blown apart when impacted by a round, and tanks blow up nicely, leaving their burned-out husks on the battlefield.

Performance-wise the game runs fine, and no crashes or slowdown was experienced in my few hours with the game. I did encounter a bug where the CPU turn just stopped and I couldn’t progress a match, although this only happened to me in custom battles.

The controls are very intuitive. Ranging and aiming shots is easy to grasp and execute, and you’ll master it very quickly on an easier difficulty. On higher difficulties where your rangefinding marks are limited, it takes a bit more planning to hit shots.

The devs also plan to add VR later in the year, but there’s not a firm timeline on that feature being added yet.

As a total package, Battle Fleet Ground Assault is still a very niche game. And it’s biggest weakness is its simplicity. While it might appeal to newer players or casual fans, there isn’t enough strategic depth to appeal to hardcore strategy fans. And when that aspect is combined with relatively simple battles, there are better games out there at similar prices.

Battle Fleet Ground Assault is a decent choice if you’re a strategy fan, and if you’re a new player looking for a simpler experience to get into the genre, this one might get a place on your shortlist. Although don’t expect the polish or presentation of something like a Company of Heroes 2 or Men of War: Assault Squad 2. Though I enjoyed playing it for a few hours, I can’t see myself grinding through much more. Once I unlock the handful of tanks locked in the Prestige system, I’ll probably just stick to Custom battles and multiplayer if I pick the game back up at all.

The developer has promised to release more content in the future, so things may get better in terms of map and tank variety in the coming months. We’ll just have to wait and see.