Looking for tips on how to win in Apex Legends? Well you’re in luck because we’ve got tips for movement, combat and where to find the best loot. Without further ado, let’s dig in.

Verticality and speed are huge in Apex Legends. Being able to move around the map effectively is absolutely vital.  The first thing you’ll need to learn is how to dive correctly. And by correct, I mean being the one to get to a location first. Tons of players make the mistake of veering straight down toward their objective, this is wrong for a number of reasons. You can’t control your landing, you can’t swerve as easily, making it harder to pinpoint your landing. Things like that are the reasons why it’s better to “wave” your jump. Waving can increase your drop distance covered over 1,000 meters easily, allowing you to hit faraway targets as fast as possible.

If you want to hit a closer target, start your jump about 800-900 meters away, and then wave drop your way down.

The general idea to land on specific point on the map as fast as possible is to create a stair with your descent. Here’s the basic principle:

And here’s a guide for you visual learners: 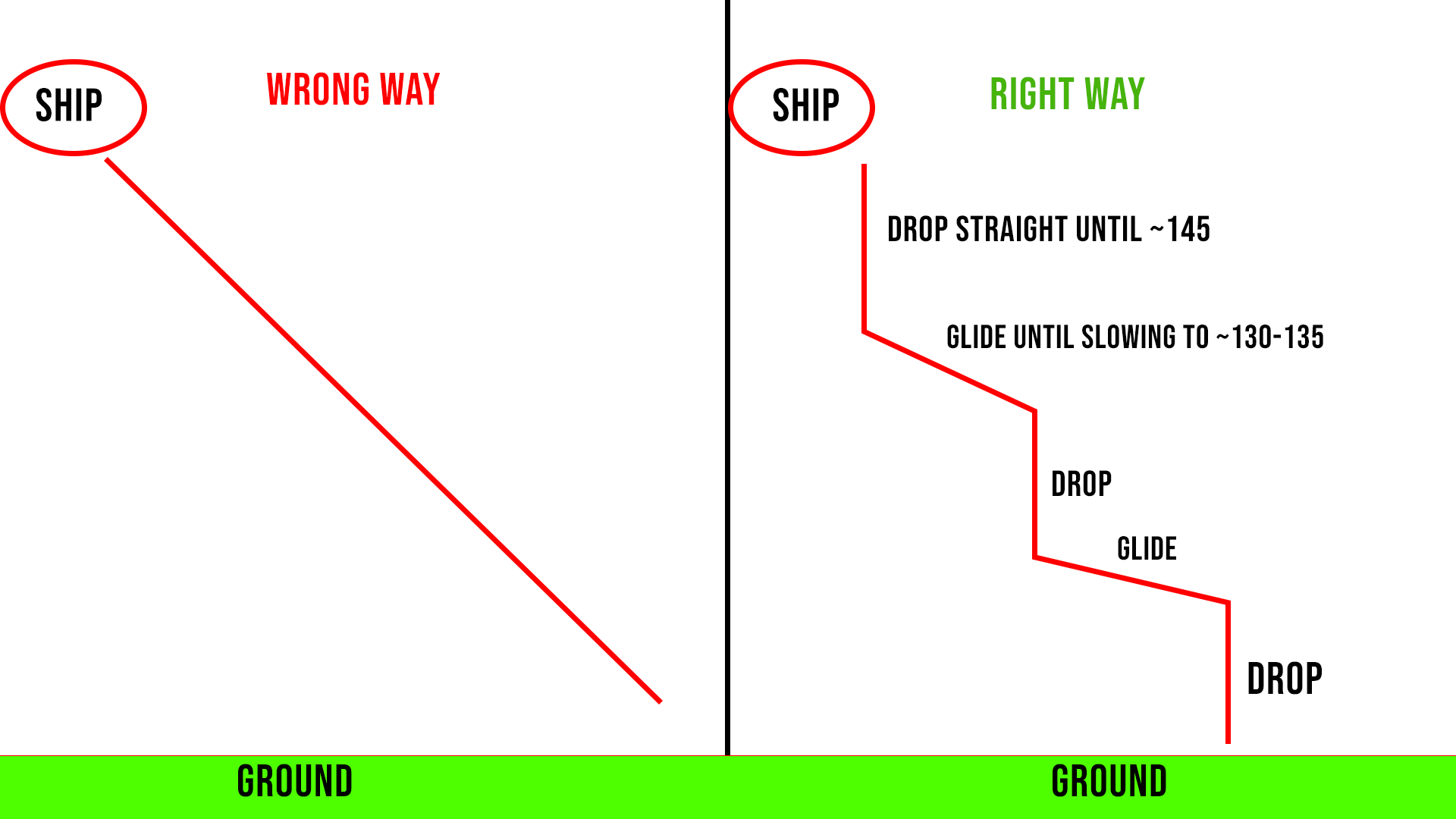 One of the most important elements of movement in Apex Legends, aside from your initial jump, is the slide. Crouching while going downhill will carry you forward down that slope. This is the fastest form of horizontal movement in the game, and should be done whenever possible. You don’t even need to press forward while sliding, let momentum take effect. This can allow you to slide down a slope while shooting behind you, it’s incredibly useful for a fast escape in a firefight. You can even do something called “bunnyhopping” and keep that momentum going.

Verticality is a huge part of how you move and view your surroundings in Apex Legends. Jumping against almost any wall will allow you to vault over most obstacles. You can however stop that vault and peak over walls, this is great for checking the other side of an object for threats.

Ziplines are scattered all over the map and are a great way to move from one area to the next, although you’re pretty vulnerable. You can jump while on the zipline to change your target profile, making you a little harder to hit. Also, jumping and then spinning around will change the direction you’re moving while on a Zipline.

One final tip with increasing movement speed and being a better player is to keep your weapon holstered when you don’t need it. You run faster, fly further and are just generally better at everything while your weapon is holstered. And don’t worry every weapon has the same base level of speed, so don’t waste time trying different weapons to find the best speed bonus.

One thing worth noting is that all characters have the same base movement speed. However, Wraith, Bloodhound, Bangalore and Mirage do have special Ultimates that confer a temporary boost in this area. And with 11 new characters coming, expect even more of the meta-game in Apex to shift over time.

Another aspect that’s crucial in-game is effective zone control. The way that loot spawns are laid out on the map means that many players will tend to rush a handful of areas to grab the good loot that spawns. Two common rush areas are Hot Zones and the Supply Ship, as both of these contain great loot options.

Hot zones are places marked with a blue circle on the map — and a blue light emanating from the spot on the ground — where players have a greater chance of finding high-tier loot.

The Supply Ship, on the other hand, is a ship carrying mid- to high-tier loot that flies for a short time at the beginning of a match before landing over an area.

It’s up to you if you want to rush these zones, but if you’re uncomfortable contesting these high-traffic areas, there’s plenty of other options for decent loot. Here’s a short list of different zones with some potential loot you can find:

Combat in Apex Legends is a complex beast. One of the things that new players often seem to forget is the color codes for damage types. Depending on the color of the outline around damage numbers, that will tell you how much damage has been dealt to either Shields or base Health. Red outlines indicate shots that have bypassed Shields. Melee damage is static in Apex, always dealing 30 damage per hit. That means it will take four hits to down someone. It is worth noting that there’s a slight knockback effect on a melee hit, allowing you to send enemies off a ledge if they’re vulnerable in the right place. Combine a well-timed melee with proper positioning to gain control of an area. Melee attacks can also kick open doors, and hitting them twice can break the door entirely.

Speaking of doors, it’s possible to block doors with Traps like Caustics, as well as your own body. Use this tip to create artificial choke points that your opponents will have to go around. This makes for great opportunities to communicate with your team and set up an ambush. Ping an enemy location and them slow them down by blocking escape routes to give your team time to respond.

Also, a note on respawns. Any teammate can respawn downed comrades at a beacon once a death banner has been grabbed.

If you really want to dive into the stats of the weapons and see the raw numbers, the community has already done the hard work and has compiled everything into nice neat charts. 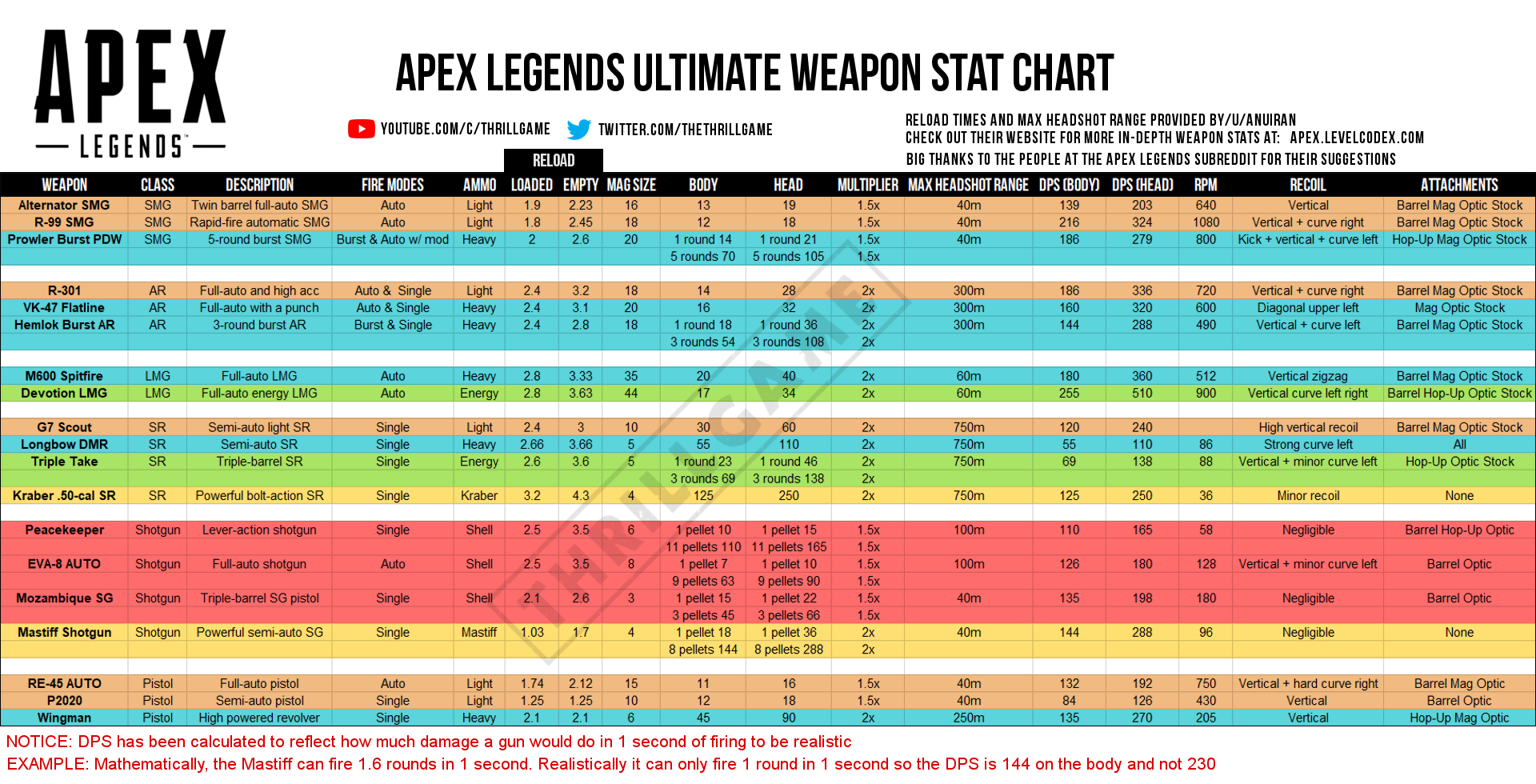 Pinging is vital in this game. Letting your teammates know where enemies and loot drops are can very easily communicate information, and allows language or other comms barriers to be completely overcome for most players.

The general idea is that you should ping both any high-tier loot. Ammo and other common pickups are more of a judgment call. This is where it helps to be able to talk with your team. Discuss what weapons you have or plan to use, that way your team can ping ammo when you need it. The UI elements for your team will show some information, like what grades of gear they have in what slots, so it’s pretty easy to see when a comrade needs an upgrade.

Players can also confirm pings, or even call dibs on a piece of loot. This is great for keeping tracks of what weapons, tools and other gear your team has. If you’re looking for ammo or gear items, you can ping inside your inventory to request the items you need too.

It’s also possible to scout out what the enemy teams have with this system. If you ping a drop for a legendary weapon and you or your teammate don’t take it, be on the lookout for another team picking it up.

It’s also possible to ping while downed but not killed, use this to show enemies to your team.

There are a handful of useful glitches in the game, although all of these will eventually be patched out, and could even earn you a ban if you abuse them, so be careful.